Roşia Montană should become a model of sustainable development in Europe

The joint mission of the leading European heritage organisation Europa Nostra and the European Investment Bank Institute (EIBI) to Cluj, Roşia Montană and Bucharest, on 16-19, June has concluded that a new and potentially more constructive period in the approach to the issue of Roşia Montană has now opened, as a result of the recent vote by both chambers of the Romanian Parliament.

Guy Clausse, Dean of the EIBI, commented on this development: “As the likelihood – and threat – of opencast mining activities in Roşia Montană are rapidly diminishing, the need to formulate an alternative, more diversified and sustainable development strategy for the region becomes essential. The crucial components for such a development strategy must come from within the local community, but Europa Nostra and the European Investment Bank Institute can and will support them in this effort.”

Europa Nostra and the EIBI have been collaborating since 2013 on the new pan-European programme ‘The 7 Most Endangered’, with the aim of selecting monuments and sites which are uniquely important to Europe but are either neglected or at serious risk of destruction. Both the unique importance of its heritage and the serious risk of its destruction are evident in the case of Roşia Montană, which was selected in 2013 as one of The 7 Most Endangered sites in Europe, upon nomination made by the Romanian heritage organisation Pro-Patrimonio. It is the view of Europa Nostra that the Roman mining galleries form an unique and irreplaceable part of our common European heritage which must be preserved. 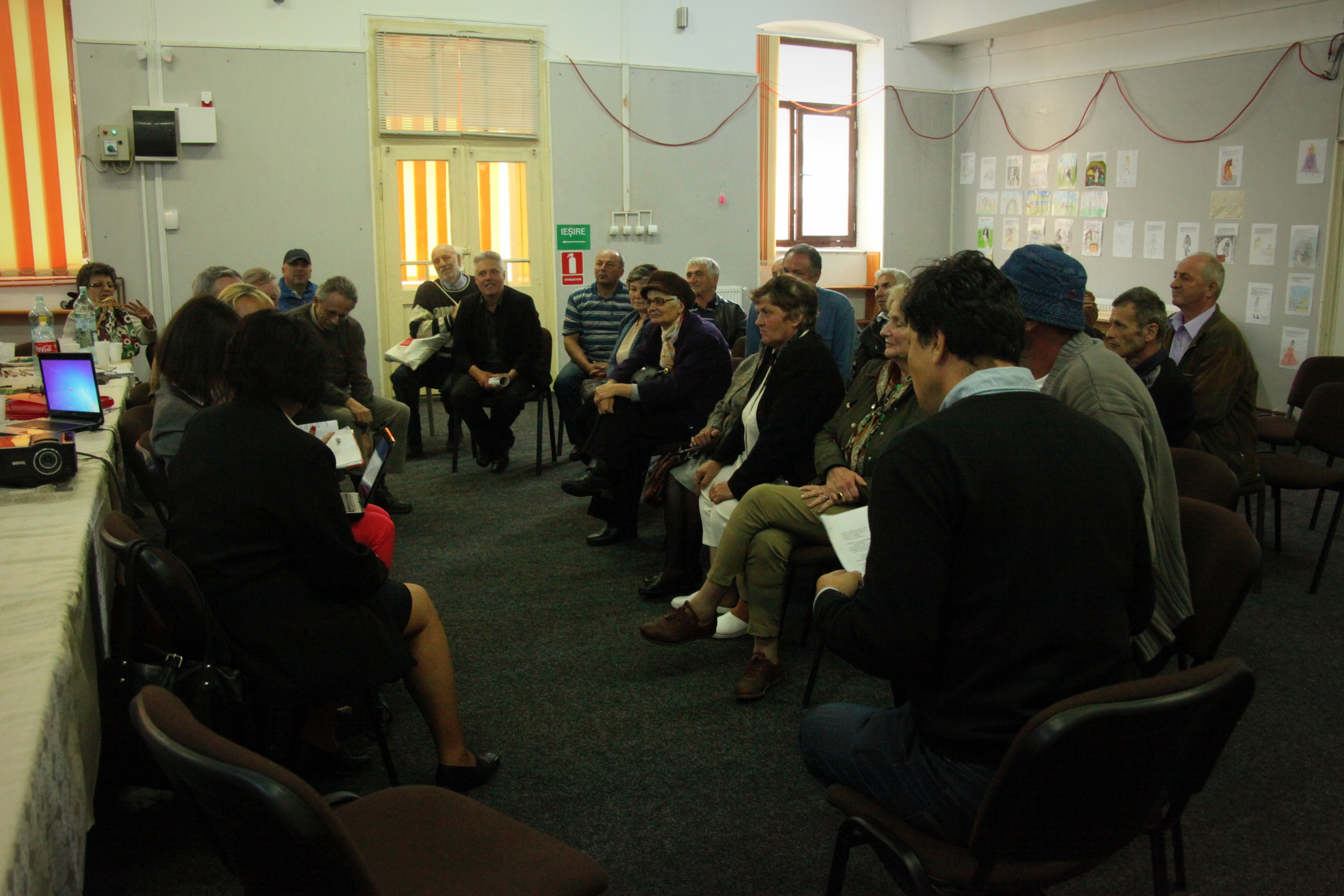 Representatives from Europa Nostra and the European Investment Bank Institute met with local, regional and national stakeholders to discuss ways to ensure a sustainable future for Roşia Montană. Photo: ARA.

This unique Roman mining heritage and the outstanding mining landscape and architecture of Roşia Montană have been under serious threat by the proposed opencast mining activity. Now, however, as a result of the remarkable determination displayed by tens of thousands of Romanian citizens and indeed citizens of many other countries both in Europe and elsewhere, and as a result of the recent vote by the two chambers of the Romanian Parliament, the time has come to investigate and propose a social, economic and environmental development plan based on the promotion and valorisation of Roşia Montană’s unique assets.

The joint mission of Europa Nostra and the European Investment Bank Institute was composed of John Sell, Europa Nostra’s Executive Vice-President; Costa Carras, Europa Nostra’s longest standing Vice-President; Guy Clausse, Dean of the EIBI; Ştefan Bâlici, Europa Nostra’s Council Member and Vice-President of ARA – Architecture, Restoration, Archaeology; and Maria Berza, member of the Advisory Panel of ‘The 7 Most Endangered’ programme. In Cluj, the mission held a series of important meetings with members of the academic community and civil society, at the Centre for Regional Geography of the Babeş-Bolyai University, and also with the President of the Romanian Chamber of Architects. The mission also spoke with many members of the wider local community, including people active in business, at a meeting hosted by the local NGO Alburnus Maior in the cultural centre of Roşia Montană itself. These meetings were very productive. In addition, there was a meeting in Cluj with five representatives of Rosia Montana Gold Corporation (RMGC), at their request.

“During our meetings, and particularly at the enthusiastic meeting in Roşia Montană itself, it has become evident that the seeds for a proposal for the sustainable development of the area, including heritage conservation, promotion of local crafts and different forms of agricultural, tourism and industrial activities already exist,” stated Costa Carras.

“A great deal more needs to be done but there is a clear determination at the local and regional levels to achieve solutions based on sustainable development and respect for the cultural heritage, simultaneously fostering a true sense of community and making Romania an example to be followed throughout Europe. This would be fully in line with the Conclusions of the Council of the European Union (Education, Youth, Culture and Sport) adopted unanimously on 21 May 2014 in Brussels and stating that cultural heritage is a strategic resource for a sustainable Europe,” added the Vice-President of Europa Nostra.