Home News Venice Lagoon: The Most Endangered site in Europe

Venice Lagoon: The Most Endangered site in Europe

Maestro Plácido Domingo, President of Europa Nostra, Europe’s leading heritage organisation, has urged authorities at all levels of governance to work together to save Venice and its Lagoon and called on the international community to support the rescue of this precious World Heritage gem. Plácido Domingo made this appeal in a video message broadcast at a public event held this morning in Venice by Europa Nostra and the European Investment Bank Institute (EIBI), in the framework of The 7 Most Endangered programme 2016. 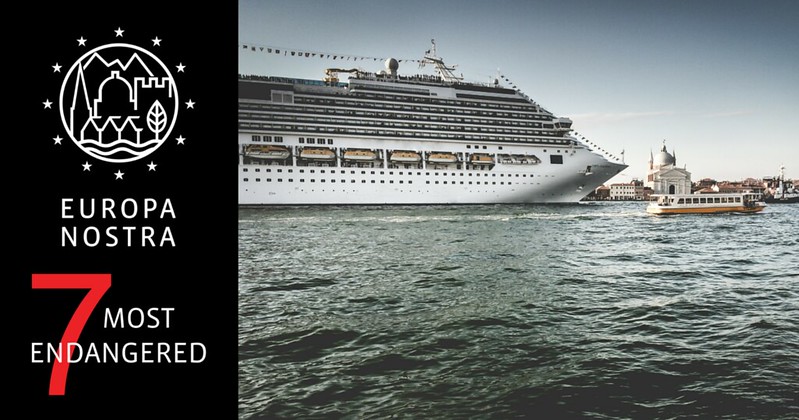 The Venice Lagoon was nominated for inclusion in this programme by Italia Nostra. Given the paramount importance of this heritage landmark to Europe and the world, as well as the complexity and magnitude of the challenges posed, Europa Nostra and the EIB Institute – following a firm recommendation from an international advisory panel of experts – decided that the Venice Lagoon should be declared as the most endangered heritage site in Europe. Europa Nostra therefore recommends that the World heritage Committee places Venice and its Lagoon on the List of World Heritage in Danger.

“Europa Nostra has come to Venice today to ring the alarm bell and to remind the world that Venice cannot survive without its Lagoon. Venice was born from the waters. The Lagoon not only represents the origin and the past of the historic city; it is also a living organism which makes the city breath, and is therefore indispensible for ensuring the future of Venice! ,” stresses Plácido Domingo, in his video message.

“Fifty years after the huge floods which provoked a solidarity movement across the entire world, international public opinion needs once again to raise its voice and to launch the following appeal to the European, Italian and Venetian governments, and also to political and business leaders: Please do not sacrifice the important but fragile living environment of the Venice Lagoon! Instead, let us join forces to ensure a long life and preserve the beauty of the Lagoon and of its Venus – Venezia!”, pleads the President of Europa Nostra.

The President of Europa Nostra draws attention to the great dangers that Venice faces: the sea level rise due to climate change and intense pressure from tourism pose serious threats to the survival of the city; the increased traffic flow of large-scale container and cruise ships, the dredging of ever deeper channels, erosion of the seabed and salt marshes, pollution, and industrial fishing are jeopardizing the integrity and very existence of the Lagoon, thus putting the city at even higher risk. These threats are compounded by the lack of an agreed Management Plan for Venice and its Lagoon, short-term thinking about the city’s economy, rapid depopulation and an over complex governance structure.

Reacting to the announcement, Francesco Bandarin, UNESCO Assistant Director-General for Culture, stated: “UNESCO takes note with great attention of the decision of Europa Nostra to declare Venice as the most endangered site in Europe. UNESCO is currently preparing a report on the situation of Venice, which will be presented to the World Heritage Committee. The Committee will issue its decisions and recommendations in July 2016”.

Italia Nostra nominated the Venice Lagoon for ‘The 7 Most Endangered’ 2016 as part of a long-term plan to save both the Lagoon and the city. Marco Parini, President of Italia Nostra, and Lidia Fersuoch, President of Italia Nostra – Venice section, presented the position of the organisation. In the short-term it proposes: the exclusion of large-scale cruise ships from the Lagoon; the suspension of new projects to dredge channels; the cancellation of all major commercial port projects; and the reconstruction of salt marshes, amongst other initiatives. Longer term measures include: the rebirth of the abandoned and polluted industrial area of Marghera to become a science and technology park; and incentives to bring inhabitants and companies to Venice. The challenges are huge, demanding a rare combination of conservation, environmental and social sensitivity. The Republic of Italy retains ownership of the Venice Lagoon. The Italian Government, through the Ministries of Environment, Infrastructure and Cultural Heritage, has primary responsibility, both legal and administrative, for this unique natural and cultural asset.

“Venice and its Lagoon are a particularly important but also large and complex issue which requires a long term strategy of sustainable development. The European Investment Bank Institute stands ready to contribute to this crucial process,” highlighted Francisco de Paula Coelho, Dean of the EIB Institute.

Silvia Costa, Chair of the Culture and Education Committee in the European Parliament, in a video message showed at the event, stated: “I fully support the strong appeal launched by Europa Nostra and its President. The Venice Lagoon is a unique but very fragile cultural landscape of Europe which is vital for the survival of Venice. What is urgently needed is to apply a holistic approach, and to define a long-term vision and strategy for the safeguard of the Lagoon with Venice at its heart. We also need an adequate integrated governance with due involvement of the civil society and communities concerned. I strongly believe that the European Union should contribute to this process in support to the efforts undertaken by public and private bodies in Italy.”

The public event at the Ateneo Veneto was moderated by Sneška Quaedvlieg-Mihailović, Secretary General of Europa Nostra.

During the event, top-level representatives from Europa Nostra and the European Investment Bank Institute announced the 7 Most Endangered heritage sites in Europe in 2016, namely: the Archaeological site of Ererouyk and the village of Ani Pemza in Armenia, Patarei Sea Fortress in Tallinn in Estonia, Helsinki-Malmi Airport in Finland, Colbert Swing Bridge in Dieppe in France, the Kampos of Chios in Greece, the Convent of St. Anthony of Padua in Extremadura in Spain, and the Ancient city of Hasankeyf and its surroundings in Turkey (read related press release).