What do young people in Europe think about European culture and cultural heritage and what do they envisage for the future? 99 pupils from all EU Member States and the five EU candidate countries (Albania, the former Yugoslav Republic of Macedonia, Montenegro, Serbia and Turkey), who were accompanied by 34 teachers, discussed and presented their ideas during the event ‘Your Europe, Your Say! 2018’ in Brussels on 15-16 March upon invitation from the European Economic and Social Committee (EESC). Europa Nostra’s Secretary General Sneška Quaedvlieg-Mihailović delivered a passionate speech on European identity and cultural heritage on the second day of the event. 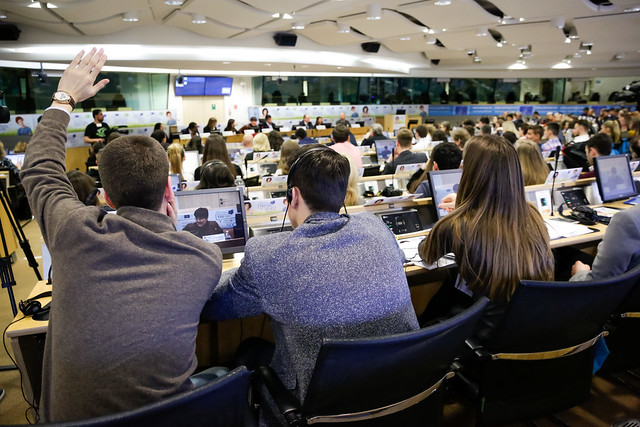 To celebrate the European Year of Cultural Heritage 2018, this year’s theme was “United in Diversity: a Younger Future for European Culture – Can European Youth take European Culture to Heart?”. The Secretary General of Europa Nostra shared the panel with Gonçalo Lobo Xavier, EESC Vice-President, and Daphne Patakia, a young Greek-Belgian actress and winner of the 2016 Berlin Shooting Stars Award.

Europa Nostra’s Secretary General stated that she was grateful for this opportunity to share her passion for Europe and its cultural heritage with so many youngsters. “It is wrong to say that Brussels is the heart of Europe. Europe is everywhere in the hearts of all of us,” she said. In order to embrace their European identity, Sneška Quaedvlieg-Mihailović encouraged the young generation to find and feel cultural heritage – the heart and soul of Europe – in a different way. “When you look at heritage in your country, look at its European history, because there is always one,” she advocated, adding that “we need every citizen to speak up for cultural heritage because it is a collective and an individual responsibility”.

Daphne Patakia shared her own experience as an actress and a European citizen, highlighting the importance of discovering other cultures from a young age. “I do not feel Belgian, I do not feel Greek. I feel European,” she said to illustrate her multilayered identity.

Sneška Quaedvlieg-Mihailović noted that giving a more European dimension to education, especially in history, was probably the best investment we could make, and invited the teachers in the audience to take action in this regard. “Only by putting education and culture at the heart of the European project can citizens understand that our diversity is a richness which deserves to be recognised and preserved,” she stated.

Many pupils asked questions to both speakers and were joined by some members of the European Economic and Social Committee who also attended the session.

The morning session was followed by a series of workshops for the youngsters, during which they debated and finalised their recommendations on European cultural heritage that will be sent to the European Commission and the European Parliament. The three winning recommendations are: the opportunity of discovering other cultures through travelling; preserve culture, learn from the past and use it to build the future; and experiment with culture.

Europa Nostra’s Secretary General suggested to the European Economic and Social Committee to invite the pupils to be the “Voice of Youth” and to present their recommendations during the European Cultural Heritage Summit in Berlin on 18-24 June.