Wiki Loves Monuments, the world’s largest photo contest, announced on 14 December the list of 15 international winning photos selected from 54 national contests. More than 245,000 photos of built heritage sites around the world were uploaded by more than 10,000 people during the month of September.

These images are now available to be used on Wikipedia and on any website for free by citing author and license. Most submissions came from Ukraine (37,566), Armenia (34,653) and Italy (20,293).

The first prize went to Prashant Kharote for his picture of the Khandoba temple in Pune, India. Plácido Domingo, the President of Europa Nostra will sign a copy of his photo during the European Cultural Heritage Summit that will take place in Berlin from 18 to 24 June 2018. 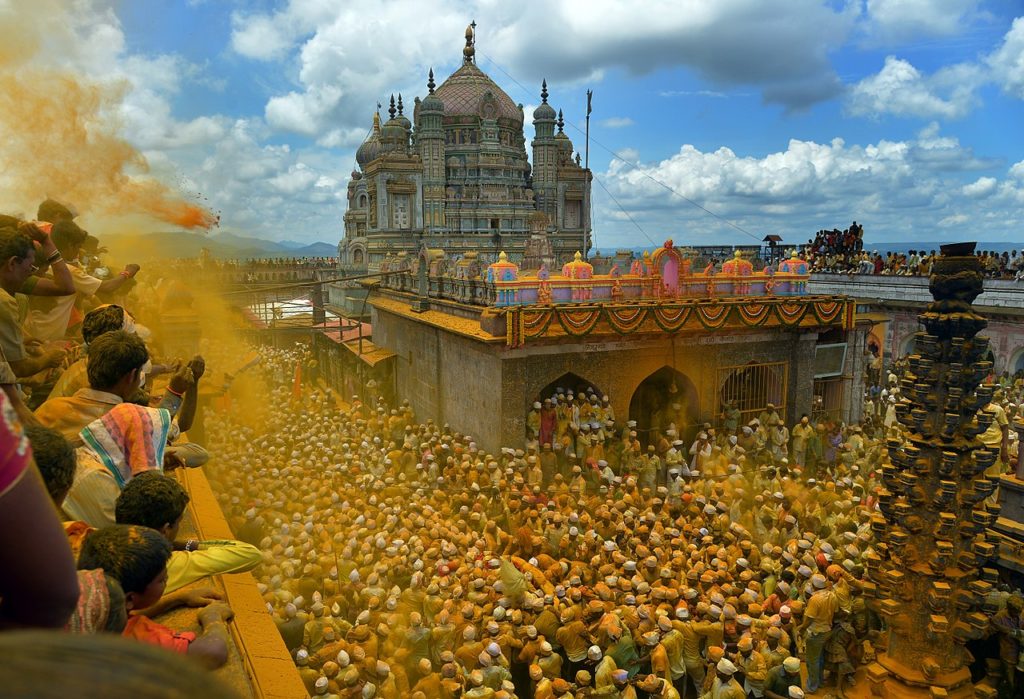 First place. The grand prize goes this year to India! The Khandoba temple in Pune, India is a wonderful view in any day, but this photo is an amazing combination of activity, color and history. During the Bhandara festival, celebrants are showering yellow turmeric powder on crowd around the temple. The play with colors makes it that you can almost smell the turmeric through the photo. (PKharote, CC BY-SA 4.0)

Second place. The second prize is quite literally a hidden gem: a royal pavilion hidden in a cave in the mountains of Thailand. Janepop travelled for more than 500 km with his friends to arrive at exactly the right moment to make this great shot with the perfect light conditions. (BerryJ, CC BY-SA 4.0) 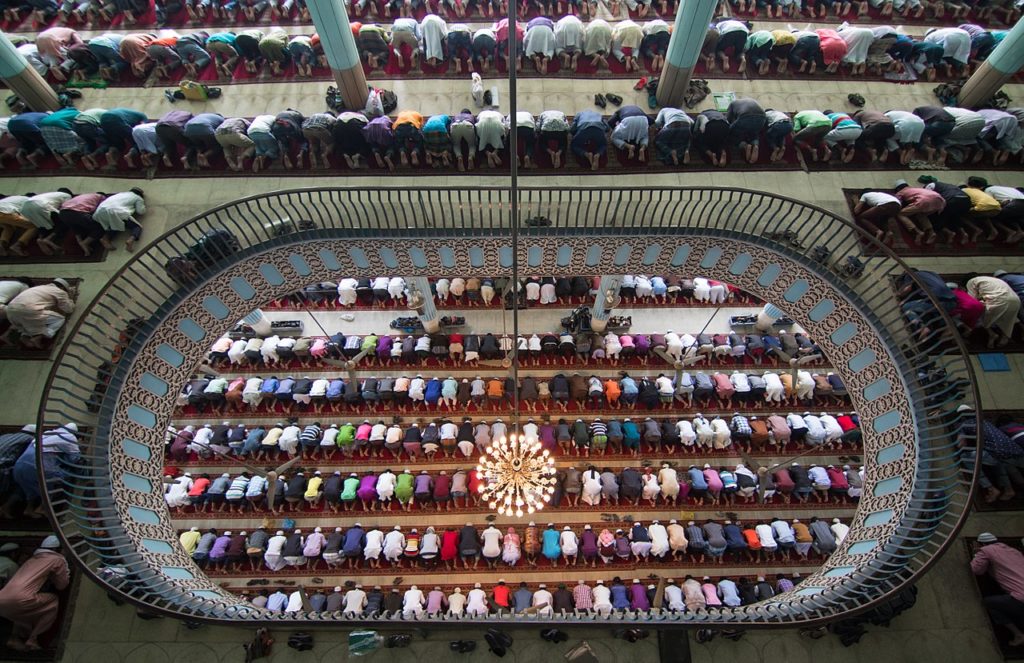 Third place. The Baitul Mukarram Mosque in Dhaka is the 10th largest mosque in the world, and was here photographed during peak hour, the Jummah prayer in the early afternoon. After many photos, Azim managed to find the exact right angle and moment that shows the magnitude of the mosque in action as well as key architectural elements. (Azim Khan Ronnie, CC BY-SA 4.0)

Fourth place. The spiral stairs from the tower of the Baron Empain Palace (also: the Hindu palace) in Cairo, Egypt. The palace was inspired by Ankor Wat (Cambodia) and built in the early 20th century out of concrete. The winding staircases can be somewhat hypnotizing, but the distortions at the top will bring you back to reality. (Manadily, CC BY-SA 4.0)

Fifth place. A great use of light emphasizes the beauty of the surrounding area of Verrucole Castle in the Italian Tuscany. Iris likes to observe strange phenomena in the sky, and wanted to capture this in the act. (Iris.gonelli, CC BY-SA 4.0) 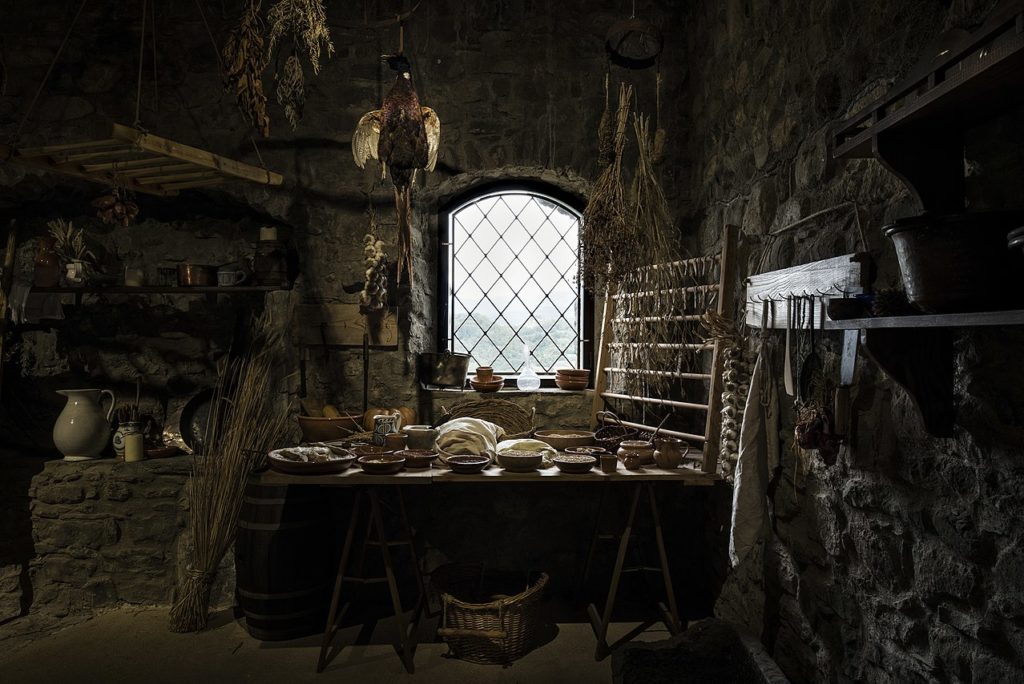 Sixth place. It’s hard to imagine, but this is the same Verrucole Castle that made fifth place! Simone managed to get into the top-10 with an entirely different photo. With a rare interior shot, it is one of the exhibitions in the castle, showing what life was like in medieval times. The jury characterized this as a ‘historical scene where the servants seem to have just left’. (Simone Letari, CC BY-SA 4.0)

Seventh place. A lonely reader in (yes, again!) the Baitul Mukarram National Mosque in Dhaka, Bangladesh gives a peek into a totally different side of the same building. The reader is not just decorative, but provides a helpful measure of scale to the nested arches. (Jubair1985, CC BY-SA 4.0)

Eighth place. Diego Delso has been a long time contributor to Wikimedia and Wiki Loves Monuments, and managed to blow away jurors once again with his magnificent photograph of the Notre Dame basilica in Montreal, Canada. Diego was unhappy about his earlier photo of this basilica, and was more satisfied with this photo ten years later. Apparently, so was the jury. (Diego Delso, CC BY-SA 4.0)

Ninth place. A great symmetric photo of Wat Benchamabophit with only the sun peeking over one of the sides is the second submission by Janepop that made it into the top-15. He photographed it already many times, as it has great architectural features and this time it definitely paid off. (BerryJ, CC BY-SA 4.0) 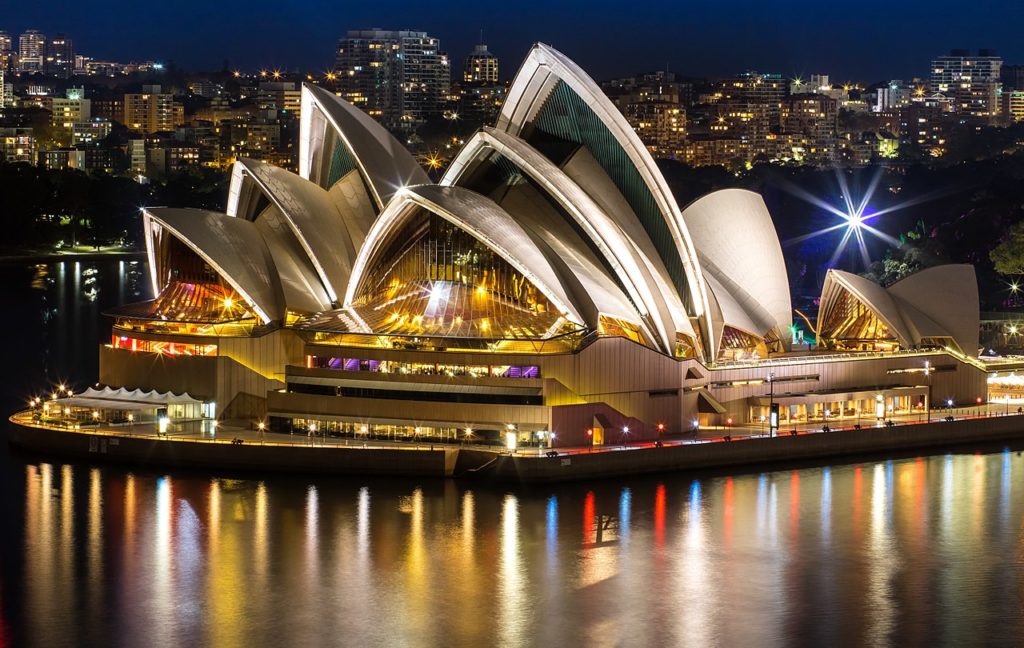 Tenth place. Australia joined this year for the first time in Wiki Loves Monuments, and with the Sydney Opera House, the country makes an impressive entry into the top-10. Thomas was already interested in night photography, and waited until the middle of winter so that the Opera House was opened during dark, so that the internal light would provide the best opportunity.(Alphacontrol, CC BY-SA 4.0) 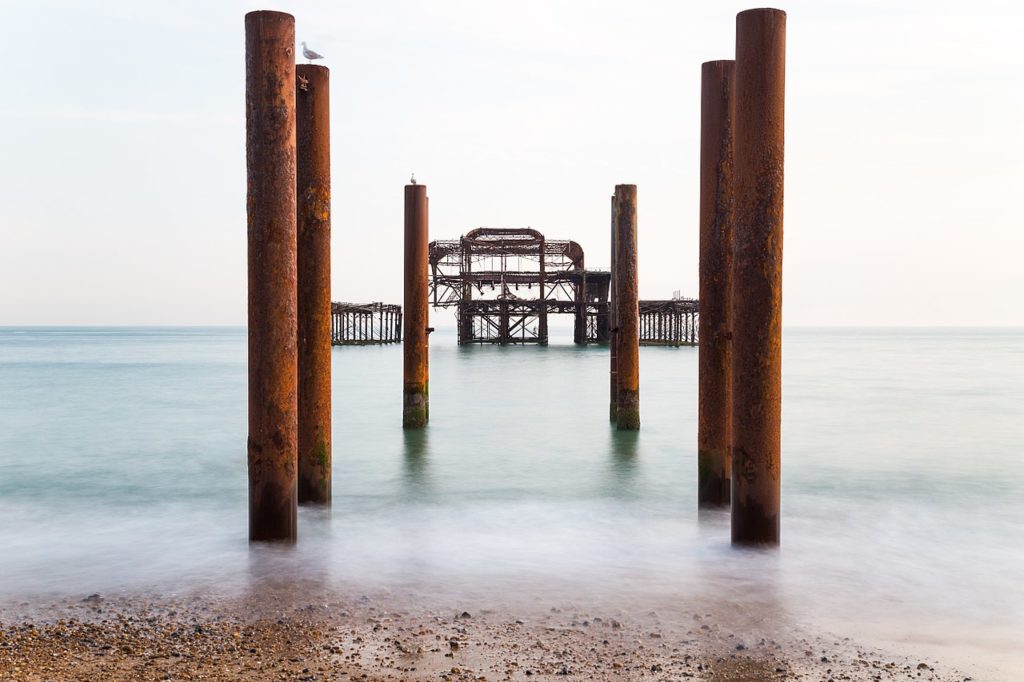 Eleventh place. Let’s face it, this derelict pier in Brighton, UK is not quite a famous beauty. But also decaying heritage is a valuable reminder of our past, and this massive pier from the 1860s is a memento from a time that pleasure piers were built in many places. The quiet sea and rusty remains provide some sense of timelessness. (Matthew Hoser, CC BY-SA 4.0) 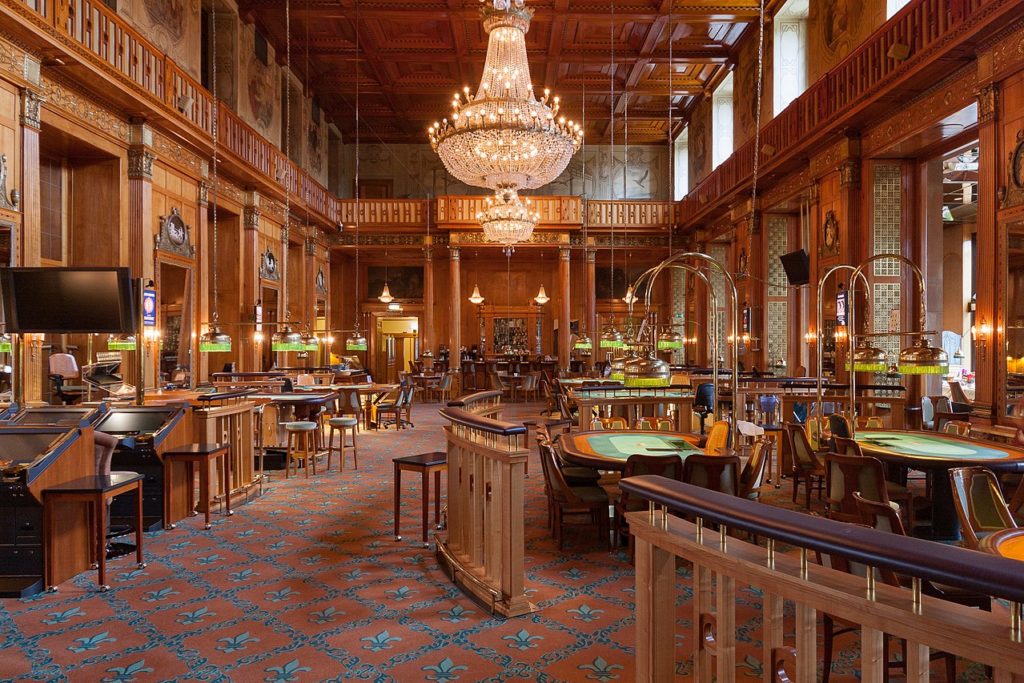 Twelfth place. This casino hall is located in one of the spa’s in the spa town Wiesbaden in Germany. While gambling is definitely going on in this establishment, it has more the look of a library. The setting is calm, but with plenty of details to discover. (Martin Kraft, CC BY-SA 3.0) 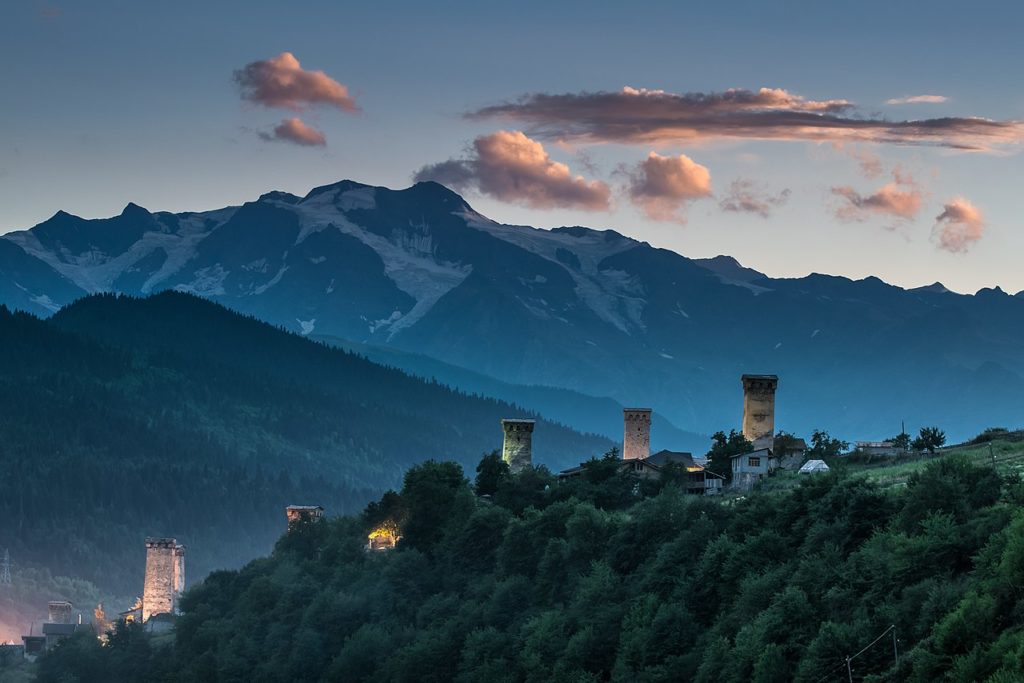 Thirteenth place. These Svaneti towers in Mestia, Georgia stem from the 9th-12th century and are typical for the region. Dmytro had to walk around for quite a while to find the exact right spot and light conditions to capture them in this composition. (Dmytro Balkhovitin, CC BY-SA 4.0)

Fourteenth place. This image shows an element of ‘Tabātabāei House’ in Kashan, Iran. The house was built in the 1880s for a wealthy carpet trader and is an example of Iranian residential architecture. With thousands of photos donated by Mostafa this year alone, we’re happy to reward this one with a fourteenth place.(Mostafameraji, CC BY-SA 4.0) 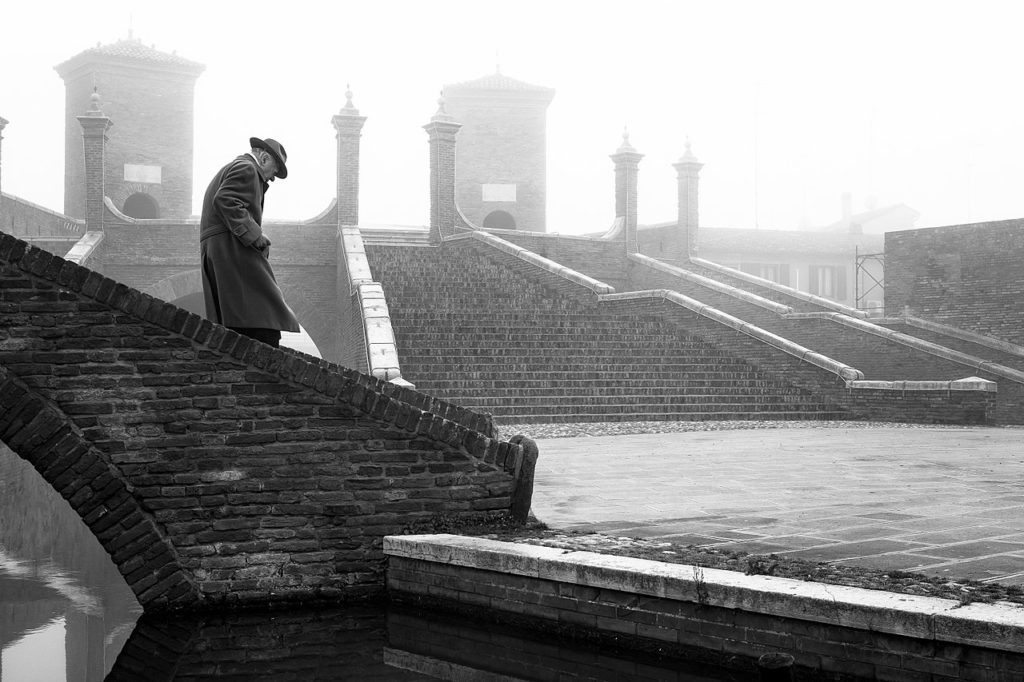 Fifteenth place. This is great in capturing an emotional state of being, and the foggy cold winter day becomes very tangible as the old man walks down the stairs in the historical center of Comacchio in Italy. (Francesco-1978, CC BY-SA 4.0)

Europa Nostra has been a partner of Wiki Loves Monuments since 2011 and is represented in the international jury by its Communication Advisor Wolter Braamhorst.

Did you enjoy these images? Continue browsing the winning pictures of all national competitions in 2017