The 2021 European Cultural Heritage Summit is taking place this week (21 to 24 September) in the World Heritage City of Venice. The Summit will offer a platform to celebrate excellence in cultural heritage skills and to highlight the value of cultural heritage for a sustainable and inclusive recovery of Europe.

The Venice Summit is organised by Europa Nostra with the support of the European Union as well as in collaboration with other European and Italian partners. The Summit is held under the patronage of the European Parliament, the Slovenian Presidency of the Council of the EU and the Italian Ministry of Culture. 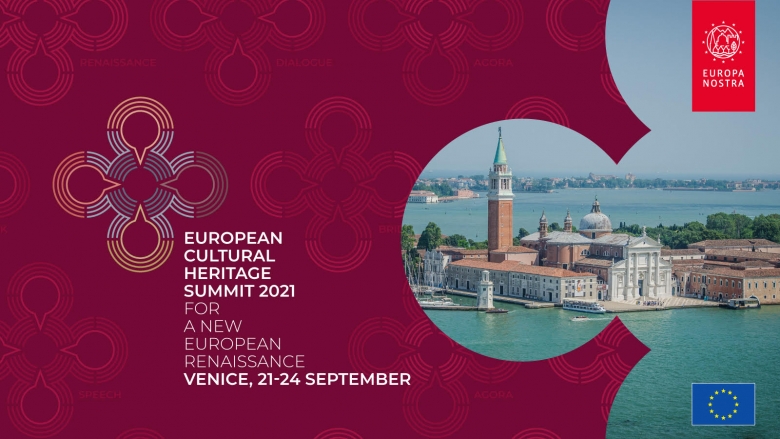 The Summit will mobilise – through in-person and online presence – representatives of the wider heritage community from across Europe and beyond, including civil society organisations; local, regional, national and European authorities; international organisations; policy-makers at all levels; young heritage professionals, students as well as heritage volunteers and enthusiasts.

Considering the limitations imposed by the current health crisis, the Venice Summit is organised in a hybrid format, bringing together a selected and limited number of stakeholders on-site while giving the opportunity to a wider audience to engage with the event virtually, as the main events will be livestreamed via live.europanostra.org.

In order to follow the livestream of the Venice Summit, you are required to register. Registration is simple and free-of-charge.

The main events of the Summit that will be livestreamed are:

10.30 – 11.15 Press Conference
Venue: Doge’s Palace, St. Mark’s Square
Live interpretation Italian into English
With the participation of Sneška Quaedvlieg-Mihailović, Secretary General of Europa Nostra, and Paola Marini, President of the Association of International Private Committees for the Safeguarding of Venice.
> This event will be livestreamed via live.europanostra.org. You need to register to watch it online.

11.50 – 12.15 “Ringing the Bells for Peace & Heritage”
Venues: in the entire city of Venice, including St. Mark’s square, and in heritage sites across Europe 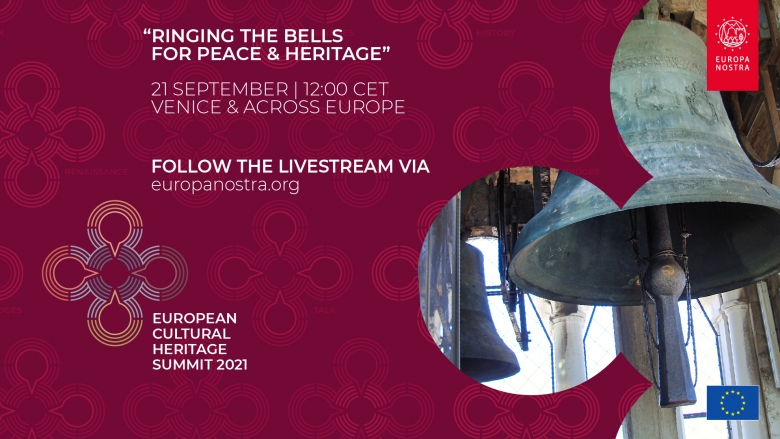 This initiative will mark the UN International Day of Peace and the launch of the Venice Summit, stressing the pivotal role of the safeguarding of cultural heritage for peace building and vice-versa. This initiative will also seek to underpin our wake-up-call to ensure a sustainable future for Venice and its Lagoon, and for other endangered heritage sites in Europe and beyond.

On this occasion, a special message in support of this symbolic initiative from the Secretary-General of the United Nations, Mr. António Guterres, will be read.

With St. Mark’s Square and all of Venice as its starting point, the bells at some of the world’s most outstanding heritage sites will proudly ring out across Europe – from the World Heritage Site of Hattusa, the capital of the Hittite Empire (in present-day Turkey), where the oldest known peace treaty in the world was written in c. 1259 B.C, to the Peace Palace in The Hague (The Netherlands), an iconic place that was recognised with a European Heritage Label for being an embodiment of the values of peace and justice in Europe since 1913; from the Mafra National Palace near Lisbon (Portugal), a World Heritage Site that features the largest set of 18th century carillon bells in the world, to the Oslo City Hall (Norway), home of the annual Nobel Peace Prize Ceremony. Read more 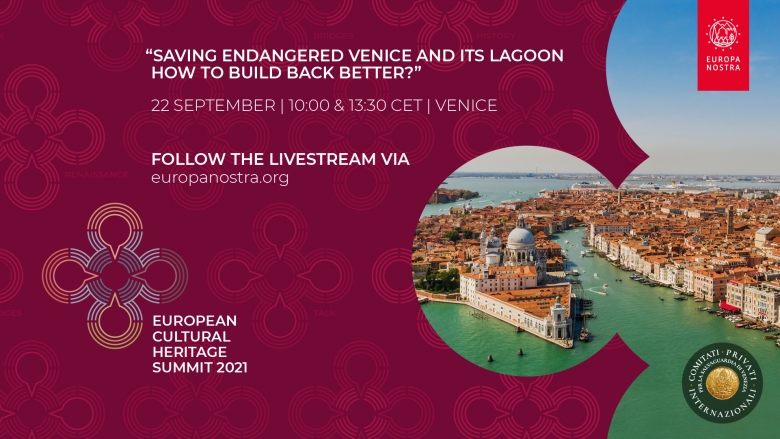 This initiative is organised by the Association of International Private Committees for the Safeguarding of Venice in collaboration with Europa Nostra and with the contribution of other Italian member organisations of Europa Nostra and local NGOs concerned. It will provide a platform for heritage, civic, academic and economic voices to propose constructive, feasible and concrete solutions for a more sustainable future for Venice. It will also seek to lay the foundations for a wider European response and joint action to save Venice & its Lagoon, which Europa Nostra and the European Investment Bank Institute declared – already in 2016 – as THE most endangered heritage site in Europe.

This event is organised by the Swiss Federal Office of Culture in collaboration with Europa Nostra, as a contribution to the dissemination of the Davos Baukultur Quality Principles. The panel will be composed of Mr. Alain Berset, Swiss Federal Councillor for Home Affairs, Ms. Anne Katrin Bohle, German State Secretary at the Federal Ministry of the Interior, Building and Community, and Mr. Francisco De Paula Coelho,Dean of the European Investment Bank Institute. The event will be introduced by a keynote speech by Sir David Chipperfield, world-renowned architect and winner of a EU Prize for Contemporary Architecture Mies van der Rohe Award as well as of two European Heritage Awards / Europa Nostra Awards. 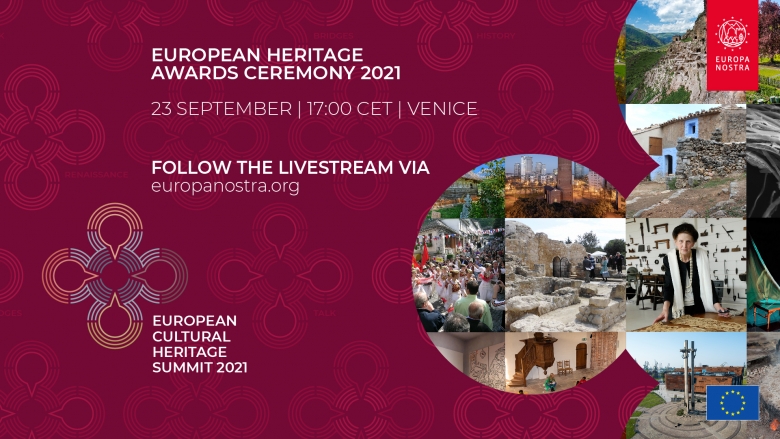 The ceremony is co-hosted by the European Commission and Europa Nostra to celebrate the winners of the European Heritage Awards / Europa Nostra Awards 2021 and of the ILUCIDARE Special Prizes 2021. During the ceremony, the four Grand Prix laureates and the Public Choice Award winner, selected from among this year’s 24 winning achievements from 18 European countries, will be announced.
The European Heritage Awards Ceremony will include a video message by Mariya Gabriel, European Commissioner for Innovation, Research, Culture, Education and Youth, and an address by Prof. Dr Hermann Parzinger, Executive President of Europa Nostra. It will be accompanied by a musical programme performed by musicians of our trusted European partner, the European Union Youth Orchestra. The masters of ceremony are Sneška Quaedvlieg-Mihailović, Secretary General of Europa Nostra, and Alberto Toso Fei, renowned Italian journalist, writer and historian. 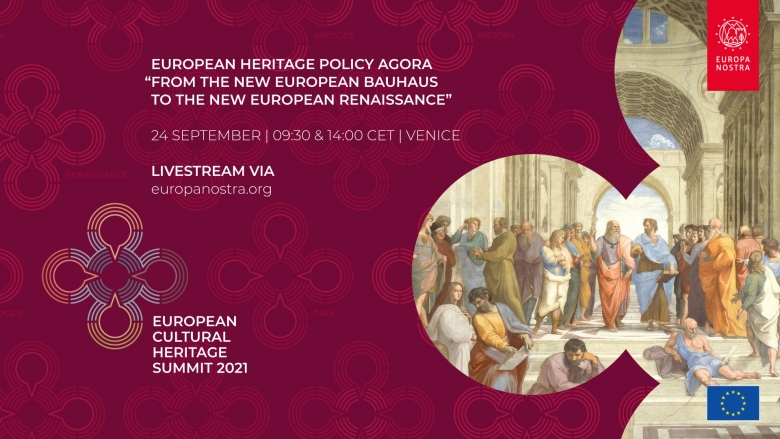 The European Heritage Policy Agora will bring together policy-makers at all levels as well as key heritage stakeholders in a series of high-level debates on the most topical issues for the cultural heritage ecosystem in Europe.

The Policy Agora is a contribution to the New European Bauhaus, of which Europa Nostra is a civil society partner. It is based on the firm conviction that, while we jointly promote a New European Bauhaus, we also ought to aspire to a New European Renaissance: one shall indeed lead to the other. The Agora also coincides with and contributes to another citizen-driven initiative launched by the EU institutions, namely the Conference on the Future of Europe. It is Europa Nostra’s response to the call for organising citizens’ debates on the future of Europe in heritage sites issued in association with the European Heritage Alliance on 9 May 2021 – Europe Day.

Aiming at connecting these various initiatives, the Policy Agora is a fitting occasion to discuss and demonstrate the role of cultural heritage in achieving all the policy priorities of the EU – from social cohesion to sustainable development and climate action, and from the protection of fundamental values to enhancing Europe’s role in the world.