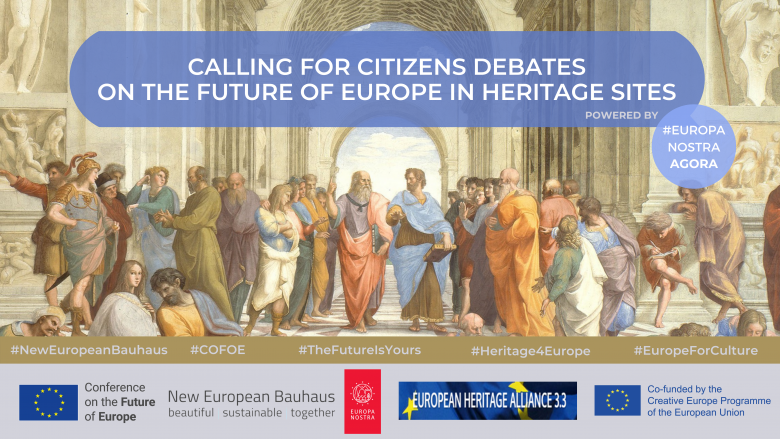 Brussels / The Hague, 9 May 2021 – On the occasion of Europe Day, Europa Nostra – in association with other 50 member organisations of the European Heritage Alliance, which celebrates this year its 10th anniversary – launches a wide call to organise during 2021 inspiring and engaging citizens debates on the future of Europe in cultural heritage sites across Europe. This grassroots initiative is a meaningful contribution both to the Conference on the Future of Europe and to the New European Bauhaus, of which Europa Nostra and some other members of the European Heritage Alliance are proud official partners.

“At the time when Europe and the world are preparing their recovery from the pandemic, let us recall the powerful message released by our European Heritage Alliance, exactly one year ago, on Europe Day 2020: Europe’s shared cultural heritage is a powerful catalyst for the future of Europe. As Europe’s citizens are invited to contribute to the Conference on the Future of Europe, we wish to mobilise Europe’s vast heritage movement and community to take an active part in this citizen-driven process. Let this year’s Europe Day become a renewed call to action for us all!” conveyed Sneška Quaedvlieg-Mihailović, Secretary General of Europa Nostra.

Reacting to this call to action, Dubravka Šuica, Vice-President of the European Commission in charge of Democracy and Demography, who is also Co-Chair of the Executive Board of the Conference on the Future of Europe, shared her support for the initiative: “Europe’s democracies are built on our rich and diverse cultural heritage. Our historical and cultural sites teach us about our common history, remind us of our past dreams and aspirations, of our humanity and creativity. It is all too natural that we debate and discuss our present and future in these magical sites and shape the heritage for Europe’s generations to come.”

Mariya Gabriel, EU Commissioner for Innovation, Research, Culture, Education and Youth, also shared her message of endorsement: “Cultural heritage is at the heart of our EU project. It is Europe’s soul and values. It belongs to all of us and is a great source of unique and creative jobs that show the richness of Europe. I believe that Europa Nostra’s call to mobilize European citizens in inspiring debates on the future of Europe in cultural heritage sites will contribute to our EU initiatives – the Conference on the Future of Europe and the New European Bauhaus -, thus coming up with innovative solutions for building more sustainable, resilient and beautiful future together”.

“For the first time, the European Institutions have launched two major initiatives largely based on the participation of citizens, namely the Conference on the Future of Europe and the New European Bauhaus. We deeply believe that heritage places, both in urban and rural areas, contribute to citizens’ wellbeing and to their sense of belonging and therefore provide ideal settings for imaginative debates on the future of Europe. We are delighted that so many eminent organisations and individuals active in the field of cultural heritage have already committed to contribute (see below),” concluded Jimmy Jamar, Head of Europa Nostra’s Brussels Office.

All citizens and organisations are encouraged to organise a debate in selected heritage sites (including sites that have received a European Heritage Award / Europa Nostra Award or a European Heritage Label) across the European continent, while ensuring full respect of COVID-19 sanitary measures in place. In order to allow the widest participation possible, the initiative remains flexible with regards to the format, scale or duration of the debates.

To maximise the impact of these debates, their outcomes will be collected and shared on the relevant platforms of the Europa Nostra Agora, the Conference on the Future of Europe and the New European Bauhaus. Interested partners can find detailed guidelines on how to participate and submit their events via the Europa Nostra Agora digital platform.

We are grateful for the enthusiastic response already received from a large group of heritage champions from all over Europe. We are pleased to share their video messages specially recorded for Europe Day 2021: 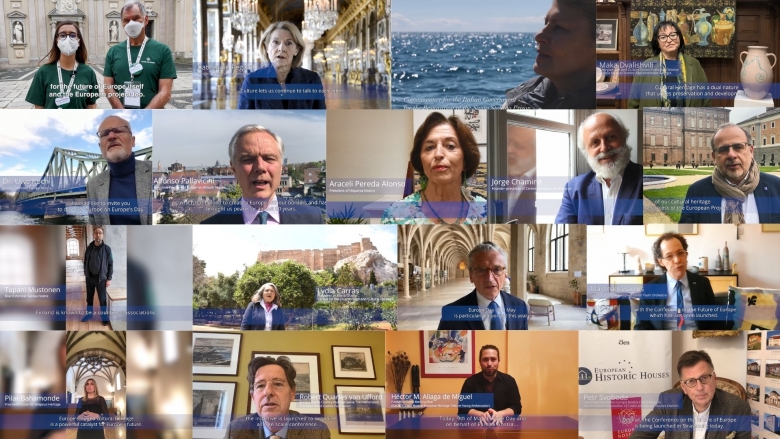 Europa Nostra is also delighted to pursue its partnership with the European Union Youth Orchestra (EUYO) on the occasion of the Portuguese Presidency of the Council of the European Union to celebrate Europe Day 2021 and the start of the Conference on the Future of Europe with a special online musical performance that will be premiered on 9 May at 11:00 CET on the EUYO YouTube channel. Under the theme “Time to deliver: What can the Arts do to help Europe’s Recovery?”, these performances were recorded by EUYO musicians in two of Europe’s most culturally and historically significant palaces: the Mafra National Palace in Portugal, which was inscribed on the UNESCO World Heritage List in 2020, and the Palais Lichtenau in Potsdam, Germany, a major historic building of early classicism.

Venice and its Lagoon; Intervention by Europa Nostra’s Secretary General at the 44th extended session of the World Heritage Committee