Home About us Governance Secretary General

Sneška Quaedvlieg-Mihailovic has dedicated her life to championing Europe’s shared values and shared cultural heritage. She has been working for Europa Nostra, the European Voice of Civil Society Committed to Cultural Heritage, during a period of over 30 years, and was appointed as the organisation’s Secretary General in 2000. She regularly interacts and works closely with all EU institutions, the Council of Europe, UNESCO and numerous public and private bodies committed to cultural heritage at all levels of governance, from local to global. 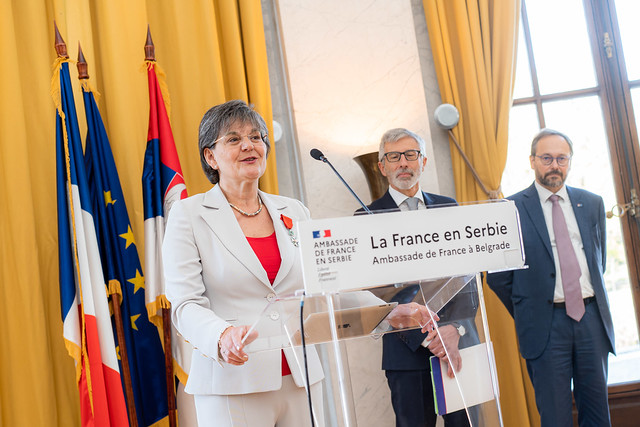 In 2022, Sneška Quaedvlieg-Mihailovic was elevated to the rank of Knight of the national order of the Legion of Honour, the highest distinction conferred by the French Republic, for her “unreserved commitment to the preservation of heritage in Serbia and more widely in Europe, in close collaboration with France” and for her “dedication and commitment to the cultural dimension of the European project”.

Sneška Quaedvlieg-Mihailovic is a regular speaker/author on cultural heritage related matters of importance for a more beautiful, sustainable and inclusive future of Europe. She has been the spokesperson of the European Heritage Alliance – an informal platform of over 50 European/international heritage networks – since its creation in 2011. She has played a prominent role in advocating and implementing the European Year of Cultural Heritage 2018 and is now a member of the EC Expert Group on Cultural Heritage. She is also committed to climate action and is the regional co-Chair of the Climate Heritage Network. She is a member of the Europeana Foundation Advisory Board, the European Union Youth Orchestra Advisory Council and the Steering Committee of the European Music Centre in Bougival.

Before joining Europa Nostra at its headquarters in The Hague, Sneška Quaedvlieg-Mihailovic worked for the EU Institutions in Brussels and in her native city Belgrade. In 1991, she was one of the founders and first Secretary–General of the European Movement in Yugoslavia. She holds a graduate degree in International Law (Belgrade, former Yugoslavia) and a post-graduate degree in European Law and Politics (Nancy, France).