Home News ‘Act for Europe through Culture’ event with MEPS

Europa Nostra, acting in its role as coordinator of the European Heritage Alliance 3.3, co-organised and actively contributed to the debate ‘Act for Europe through Culture’ held in Brussels on 23 September 2019. The event was hosted by the European Cultural Foundation and Culture Action Europe, in cooperation with the European Heritage Alliance 3.3, coordinated by Europa Nostra, and BOZAR. The event aimed at providing a platform for discussion among the newly-elected Members of the European Parliament, cultural and heritage organisations and European foundations, on the place that culture and cultural heritage should have in the political agenda of the incoming European Commission and the new European Parliament. 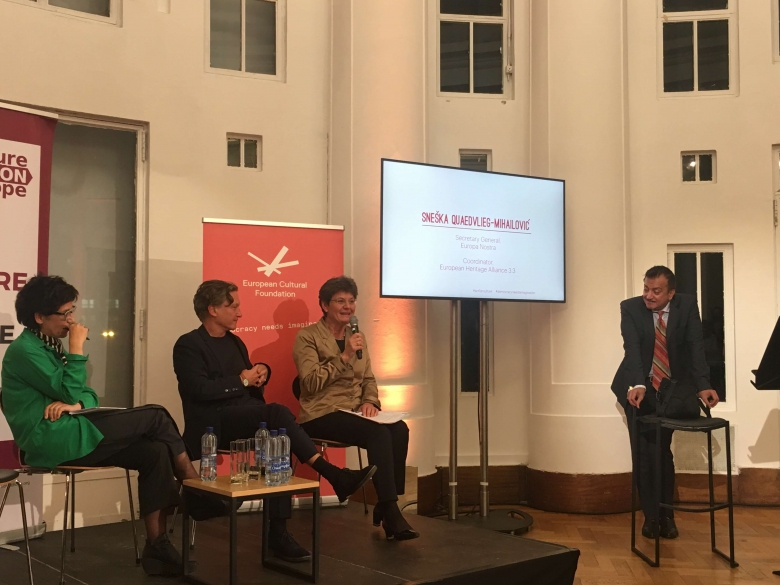 Europa Nostra’s Secretary General Sneska-Quaedvlieg-Mihailovic was among the three speakers that delivered input statements during the opening of the event. Tere Badia, Secretary General of Culture Action Europe, and André Wilkens, Director of European Cultural Foundation also delivered keynote speeches before opening the floor to the debate with the audience and the present Parliamentarians.

In their speeches, the three speakers regretted the omission of the word ‘culture’ in the portfolio of Commissioner-designate Mariya Gabriel, who will be in charge of culture, youth and sport, as well as education and research in the new European Commission, as announced by the incoming Commission President Ursula Von der Leyen on 10 September 2019.

In her speech, Europa Nostra’s Secretary General Sneska Quaedvlieg-Mihailovic called on the incoming European Commission and newly elected European Parliament to capitalise on the latest policy developments, such as the European Year of Cultural Heritage in 2018 and the inclusion –for the very first time- of culture and cultural heritage in the New EU Strategic Agenda 2019-2024, and build on them for the future.

Our Secretary General @SneskaEN calls on the new @EU_Commission to capitalise on previous 🔑 developments like the #EYCH2018 & the New EU Agenda 2019-2024 & build on them for the future.#bringculturebackMsPresident! pic.twitter.com/JH9wUCvlRv

Sneska Quaedvlieg-Mihailovic also pointed out that cultural heritage offers opportunities to face many of Europe’s most pressing challenges, including environmental and social ones. She called for ‘a united front for culture’ and stressed that culture and cultural heritage shall be seen as cross cutting-priorities that can contribute to achieve many policy objectives.

Bring Culture Back Ms President!
During the debate, speakers and participants raised many times the urgent need to bring the word ´culture’ back to Commissioner-designate Gabriel’s title.

‘While acknowledging the reassuring fact that culture and cultural heritage are duly included in the mission letter that the President-elect of the Commission has sent to Commissioner Gabriel, it is impossible to explain the decision of Von der Leyen to remove the word Culture from the job title of the new Commissioner.’ said Sneska Quaedvlieg-Mihailovic.

Indeed, this grave omission provoked numerous reactions by the sector in terms of advocacy efforts and joint campaigns launched by civil society organisations, including Europa Nostra. Following the announcement by the incoming President of the European Commission Ursula Von der Leyen on September 10, Europa Nostra immediately conveyed -through its direct channels- serious concerns on these developments to President Macron, Chancellor Merkel and also to the team of of President Sassoli and President Donald Tusk.

As a closing remark, Sneska Quaedvlieg-Mihailovic thanked the incoming President of the European Commission Ursula Von der Leyen for ‘giving the cultural sector some homework to do’ and ‘for making us realise that we shall never take culture for granted’.

🗣 What is your message to president- elect of @EU_Commission @vonderleyen ?@SneskaEN says: THANK YOU, Ms President, for making us realise that we shall never take #culture for granted.#CultureMatters #InCultureWeTrust pic.twitter.com/mDjaQOQgfE

After lively and engaging discussions, the event concluded with a networking cocktail and a tour of the art exhibition “Incarnations” courtesy of BOZAR.

European Heritage Green Paper preview: a debate on the value of cultural heritage for the green future of Europe