“Magical”, “inspiring” and “memorable” were the most common expressions used by the winners of the European Heritage Awards 2016 to describe the presentation ceremony held on 24 May at the historic Zarzuela Theatre in Madrid, Spain. Around 1,000 people from all over Europe celebrated this year’s most outstanding heritage achievements, welcomed the messages on the power of heritage to revive the European project conveyed by EU Commissioner Tibor Navracsics and Europa Nostra’s President Plácido Domingo, and demonstrated firm support for the proposed European Year of Cultural Heritage 2018. It was an evening of celebration with wonderful surprises.

The 28 winners of the EU Prize for Cultural Heritage / Europa Nostra Awards 2016, coming from 16 countries participating in the EU’s Creative Europe programme, and the winner of the Europa Nostra Award, from a European country not taking part in that programme, received the awards from the Juries’ Chairpersons of the four categories. 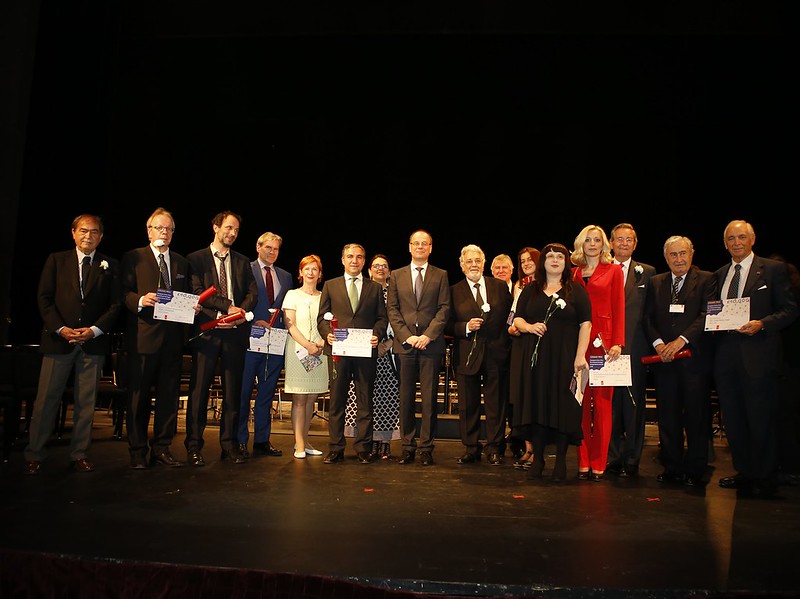 The 7 Grand Prix, selected by independent expert juries and entitled to receive €10,000 each, and the Public Choice Award, chosen in an online poll conducted by Europa Nostra, were alternately presented by Tibor Navracsics, European Commissioner for Education, Culture, Youth and Sport, and Maestro Plácido Domingo. The rehabilitation of The King’s Little Pathway in Spain was the big winner this year: the expert jury granted it a Grand Prix while the general public selected it as their favourite heritage project in Europe.

In his speech, Commissioner Navracsics affirmed: “All award-winning projects highlight the professionalism and dedication of the people involved in the heritage field throughout Europe. Heritage is not only about monuments or sites, but about people. Our heritage is a living thing, and ultimately a key to our future. This is the message our winners convey. Let me congratulate and thank them and their teams. Their stories show us the way.”

Referring to the recent proposal made by the European Commission to designate 2018 as the European Year of Cultural Heritage, the Commissioner urged: “I would like to take this opportunity to call on you, the cultural heritage sector, to be a vital part of our efforts to make this Year a success.”

In response, Plácido Domingo stated: “Europa Nostra and so many other organisations have campaigned passionately in favour of this great initiative. I can guarantee that Europa Nostra, all our members and partners, with all our award winners, will give you our full support! We agree that culture and cultural heritage are strong positive forces for change and that the Year should be used as a catalyst for a true European renaissance”.

“At this moment, when so many forces seek to divide Europe and to rebuild barriers in Europe, we have to present our cultural heritage as a strong cohesive force for Europe and its citizens. Though diverse, we are a big family, with a formidable history and an amazing heritage. We should invest much more effort in educating – young and old alike – about the importance of those assets. I very much hope that the European Year of Cultural Heritage in 2018 will become a real firework of positive and creative energy generated by various forms of social participation, both at local and European levels,” advocated the President of Europa Nostra.

Following the welcome remarks by Íñigo Méndez de Vigo, Spanish Minister of Education, Culture and Sport, Araceli Pereda, President of Hispania Nostra, addressed the audience. “I could not imagine a better way to celebrate the 40th anniversary of our Spanish association, Hispania Nostra, than to act as hosts to the members of Europa Nostra, our mother ship, and all those Europeans involved in the preservation and promotion of our shared heritage. Let us continue contributing something meaningful to Europe, enhancing our culture, while widening our horizons beyond Europe to other cultures.”

It was a celebratory evening with some wonderfully surprising moments. Álvaro Fernández-Villaverde y Silva, Marqués de Santa Cruz, received a Medal of Honour, the highest distinction conferred by Europa Nostra, from Plácido Domingo, in recognition of the 30 years of his visionary leadership, generous dedication and tireless efforts in promoting Europa Nostra’s mission and raising the profile of the organisation.

Maestro Domingo was himself presented with a symbolic gift from Europa Nostra for the “3rd celebration of his 25th birthday”: a special cartoon drawn by Plantu, world-renowned French cartoonist, illustrating the great significance for Europe of his role as President of Europa Nostra, the pan-European organisation which is known as “the voice of cultural heritage in Europe”.

During the musical finale of the ceremony, Plácido Domingo surprised the audience by taking over the conducting of La del Soto del Parral – Ronda de enamorados by Reveriano Soutullo and Juan Vert. He also spontaneously joined the soprano Auxiliadora Toledano and the tenor Israel Lozano – both Spanish Spanish laureates of Operalia – accompanied by the Choir of the Polytechnic University of Madrid and the Barbieri Chamber Orchestra, for the Brindisi aria of Giuseppe Verdi’s La Traviata to the great delight of the audience.