Home News Belgium: Masterplan for the renovation of the Bourla Theatre to be presented in May 2017

Belgium: Masterplan for the renovation of the Bourla Theatre to be presented in May 2017

The masterplan for the renovation of the Bourla theatre in Antwerp in Belgium, whose 19th century stage machinery was listed among ‘The 7 Most Endangered’ heritage assets in Europe in 2014, will be unveiled in May 2017. The related management plan will be put forward by the end of next year. Both plans are being developed by architecture and consultancy firms jointly selected by the City of Antwerp, owner of the Bourla theatre, and the resident company Toneelhuis.

Some 16 national and international candidates, including renowned architecture offices, submitted valid applications. Five candidates were shortlisted to propose a conceptual approach to the different challenges involved in the renovation of the Bourla theatre, taking into account the needs of the contemporary theatre company Toneelhuis as well as the heritage value of the listed building and its rare 19th century stage machinery.

The THV DRDH Architects-Julian Harrap Architects in cooperation with Arup Theatre Consultants, Arup Acoustics, ABT and RCR were commissioned to devise the masterplan and management plan for the Bourla theatre. The public announcement was made by the City of Antwerp and Toneelhuis on 1 July 2016. 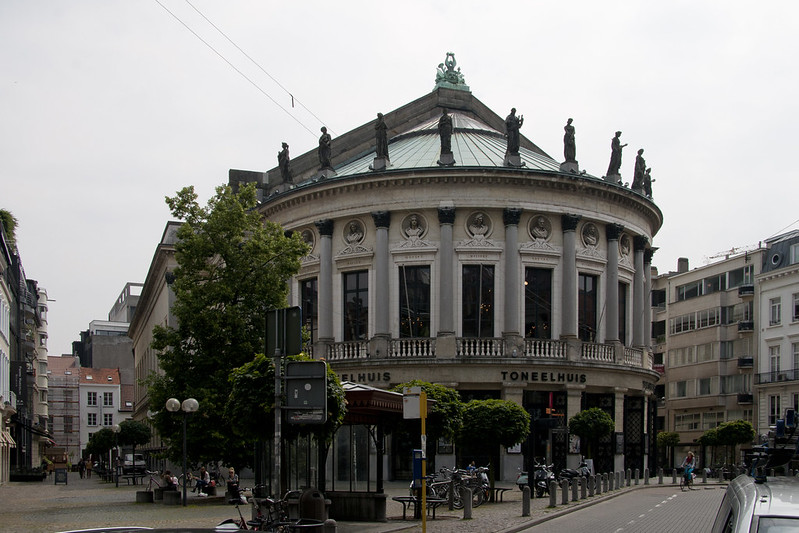 “The renewal of the original concept offers a guarantee for an approach that preserves cultural heritage in a respectful way while inspiring future uses. The conceptual approach of DRDH-Julian Harrap contains a clear vision within which there is space for an open dialogue between the two parties to undertake further research on the optimal solutions,” reads the evaluation report prepared by the internal Jury, which included a representative from the Flemish Agency for Cultural Heritage as observer.

“The measures suggested by DRDH-Julian Harrap show an intelligent cohesion and consistency leading to well-considered choices and proposals, which prove thorough knowledge and understanding of the history and significance of the building as well as of the essence of the theatre,” the report states.

“Further research is needed to make the final choices and decisions, but the proposals demonstrate the will to find solutions which offer guarantees to achieve broad support among all the stakeholders involved, with the largest possible conservation of cultural heritage and maximal response to the needs of the contemporary theatre company Toneelhuis,” it is noted.

Piet Jaspaert, Vice-President of Europa Nostra, who has been actively involved in this case since the beginning, was informed on a regular basis of the different stages of development by the chairman of the Jury.

Philip Heylen, Alderman for Culture, Economics, Urban and Area Maintenance, Heritage and Liturgy, said: “I am delighted that the renovation and restoration of the Bourla Theatre will allow a perfect marriage between the past, the present and the future”.

In July 2015, Europa Nostra and the European Investment Bank Institute published a technical and financial report for the rehabilitation of the 19th century stage machinery of the Bourla theatre. “The optimal result would be returning the stage, structure and machinery to full operation, with a team of technicians trained in the operating and maintenance practices needed to ensure the long-term operational security of the theatre, and to present a combination of period and contemporary theatrical productions using the machinery,” stresses the report.

This technical and financial report was prepared on the basis of the outcomes of the two missions in Antwerp undertaken in October and December 2014, during which representatives from Europa Nostra, the European Investment Bank Institute and PERSPECTIV – which made the nomination for The 7 Most Endangered programme –, together with renowned theatre and restoration experts, visited the Bourla theatre and held extensive talks with the key stakeholders, namely the City of Antwerp and the resident company Toneelhuis.

In March 2015, Europa Nostra organised a working visit to England where delegates from the Flemish Ministry for Cultural Heritage, the Flemish Agency for Cultural Heritage, the City of Antwerp and Toneelhuis had the opportunity to visit four representative theatres in Newcastle and Leeds in order to get a better overview of the issues involved and the factual approach required.