The eight partners of the ILUCIDARE Consortium met for the second time on 10-12 June in Krakow, Poland. The meeting was hosted by the International Cultural Centre, one of the research partners of the project, and attended by representatives of all members of the ILUCIDARE Consortium, including Europa Nostra. ILUCIDARE is a project funded by the European Union’s Horizon 2020 Research and Innovation Programme with the aim of establishing an international network promoting heritage as a resource for innovation and international cooperation. 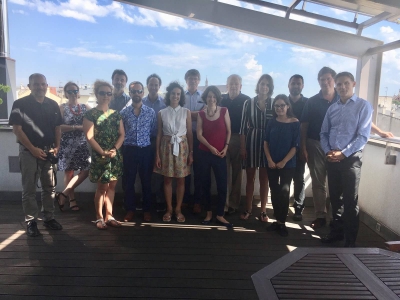 Following the successful kick-off of the project on February 2019, ILUCIDARE partners met in Krakow to take stock of implemented activities and to plan the work ahead. The Europa Nostra Delegation was composed by Laurent Levi-Strauss, who represents the Europa Nostra Board in the ILUCIDARE Steering Committee, as well as by two Staff members: Programmes Coordinator Elena Bianchi and Outreach Officer Lorena Aldana.

During the meeting, ILUCIDARE partners discussed some of the main deliverables of the project, including a diplomacy toolkit and an innovation handbook that will be developed through a collaborative process involving local communities, professionals and innovators. The Consortium partners also discussed the selection process of the ILUCIDARE Special Prizes that will be developed by Europa Nostra.

The first ILUCIDARE “Focus Group” and “Co-creation Atelier” were held back-to-back to the Consortium meeting on 10-11 June 2019. The “Focus Group” brought together around ten cultural heritage experts from Central and Eastern Europe to discuss the first outcomes of ILUCIDARE and to enhance the generated knowledge on heritage-led innovation and diplomacy. During the co-creation atelier, invited experts and Consortium partners brainstormed and exchanged about appropriate formats and tools to best achieve the ILUCIDARE objectives.

Kicking off the 1st #ILUCIDARE Focus Group in Krakow, hosted by @ICC_MCK_Krakow, one of the research partners of the project.

We’ve gathered a group of high-level heritage experts who will contribute to @ilucidare through:
✅ definitions
✅case studies
✅ success factors pic.twitter.com/2p4wS45Tsm

The Call for Entries for the ILUCIDARE Special Prizes was launched on 21 June 2019 and the deadline for applications is until 1 October 2019.

The next ILUCIDARE Consortium meeting will take place in Brussels on November 2019. It will be followed by a second ILUCIDARE “Focus Group” and “Co-creation Atelier” as well as by a High-level Event that will bring together heritage practitioners, innovators and policy-makers.

Find out more about ILUCIDARE