“Interesting”, “engaging” and “energising” were the most common expressions used by the participants to describe the Capacity Building Days organised by Europa Nostra for its Member Organisations on 13-15 April 2016 in Brussels. Communication Officers of heritage NGOs (or their representatives) from 14 European countries – Albania, Armenia, Belgium, Bosnia and Herzegovina, Croatia, Finland, Greece, Italy, The Netherlands, Portugal, Serbia, Spain, Sweden and the United Kingdom – participated in the second edition of the Capacity Building Days. Communication experts from public and private bodies as well as officials from the European Commission, the European Commission Representation in Brussels and the European Investment Bank Institute joined in the discussions revolving around ‘Communicating Heritage in Europe’.

The programme was designed with a dual goal. Firstly, to show successfully executed communication initiatives in the cultural heritage field from various European countries, and, secondly, to provide a platform to share best practices, discuss concerns and learn from one another. The programme was composed of four panel discussions – focusing on Communication and policy lobbying, public engagement, campaigning for heritage in danger and success stories – and a debate on marketing heritage. These sessions were introduced and moderated by a large variety of speakers from all over Europe. 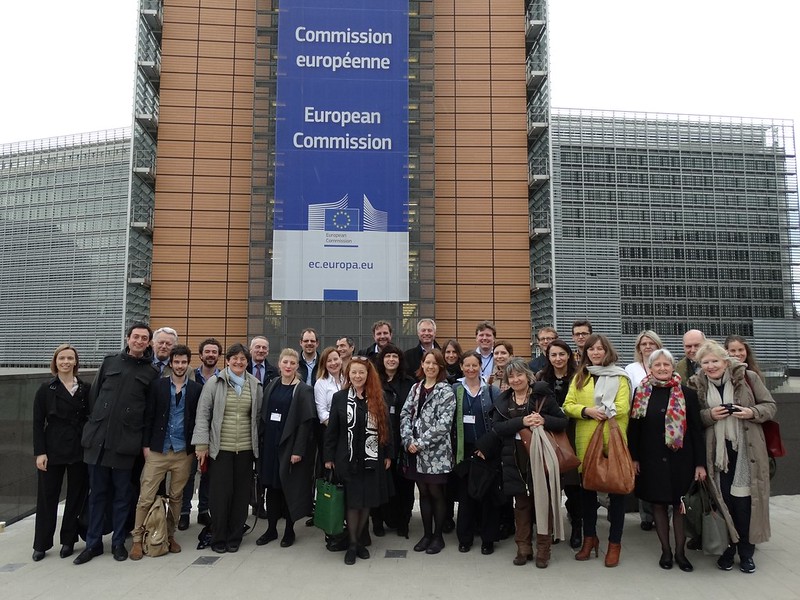 On the afternoon of 13 April, at Europa Nostra’s Office in Brussels, the Capacity Building Days were opened with a rich discussion on ‘Communicating Europe’and ‘Communicating Heritage’, following the addresses by Jimmy Jamar, Head of the European Commission Representation in Belgium, and Wolter Braamhorst, Europa Nostra’s Communication Advisor, respectively.

“What we are lacking is a vision for Europe. We need to reconsider the messages and the tools to communicate about the European project. The proposed European Year of Cultural Heritage is a great instrument to counteract the negative spiral in Europe and reconnect the citizens with the European project,” stated Jimmy Jamar.

In the evening, at the Bibliothèque Solvay, the participants of the Capacity Building Days attended the 2016 European Heritage Label ceremony, during which 9 sites were recognised as being of particular significance to European cultural heritage. Tibor Navracsics, European Commissioner for Education, Culture, Youth and Sport, presented the Label to the representatives from the sites in front of an audience of 120 people.

The morning session of 14 April concentrated on ‘Communication & Policy Lobby’. Sneška Quaedvlieg-Mihailovic, Secretary General of Europa Nostra, spoke about the strategies developed by the organisation to communicate policy on heritage in Europe. She stressed the importance of having a credible message founded in good research, giving the example of the Cultural Heritage Counts for Europe Report, and passing it on to targeted audiences; the right tools to share powerful stories, both about heritage successes and about the many threats to our heritage, referring to the EU Prize for Cultural Heritage / Europa Nostra Awards and to The 7 Most Endangered programme, respectively; and building solid relationships and alliances with selected public and private stakeholders. The presentation set the stage for a fruitful exchange of views on the topic with Karel Bartak, Head of Unit Creative Europe Programme at the DG Education and Culture of the European Commission, Dennis Abbott, Managing Director Communications at Burson Marsteller and former Spokesperson of EU Commissioner in charge of Culture, and Kate Pugh, Chief Executive of The Heritage Alliance.

The morning session also featured presentations on ‘Heritage and Social Media’ by Raffaele Ferrando, a member of the Social Media Team of the EU Creative Europe programme, and Giuseppe Simone, Web Communication Officer of Europa Nostra, who each shared best practices and showed the results of the online and media campaigns on the European Heritage Days and the winners of the European Heritage Awards 2016, respectively.

The afternoon session focused on ‘Communication & Public Engagement’(moderated by Wolter Braamhorst). Lodewijk Gelauff, Founder of the Wiki Loves Monuments (partner of Europa Nostra), presented the world’s largest photography competition in the field. Aida Kalender, Programme Manager of AKCIJA, spoke about the impressive media and online campaign developed to raise awareness of the inspiring efforts of the employees of the National Museum of Bosnia and Herzegovina in Sarajevo who worked hard and without pay for three years in order to keep the museum active in a difficult political situation, as well as of the activists who assisted them (winner of an EU Prize for Cultural Heritage / Europa Nostra Award 2016).
The day concluded with a fruitful café debate on ‘Marketing Heritage’(moderated by Piet Jaspaert, Vice-President of Europa Nostra) and a networking dinner which each facilitated further discussions among the participants. Eleanor Kenny, Head of Marketing and Communications at Europeana, stated: “The Capacity Building Days are an excellent initiative. I am delighted to have the opportunity to share with you the ‘anatomy’ of our most recent initiatives, namely Europeana 280, #BigArtRide and Faces of Europe, which will be jointly launched on 21 April. Europeana 280 is a cross-border campaign to get people excited about Europe’s shared art heritage. All 28 EU Member States nominated 10 pieces of art held in their country that have contributed to a major European art movement. #BigArtRide is a virtual reality event touring ten cities across Europe – starting in The Hague and Amsterdam – which celebrates Europe’s shared art heritage and the Dutch Presidency of the EU. Faces of Europe is a unique virtual exhibition which brings together highlights from every country’s final nominations to tell the story of European culture through the eyes of its artists. Romain Delaume, CEO and Co-Founder of Dartagnans, spoke about crowdfunding in the heritage field and presented the first crowdfunding platform for cultural heritage projects.

Two panel discussions were held on the morning of 15 April. The first session on ‘Campaigning for Heritage in Danger’ was moderated by Katerina Stebili, Head of Communications of Elliniki Etairia. Anna-Maija Halme, Communications Manager at Suomen Kotiseutuliitto, presented the media campaign about the most endangered heritage sites in Finland; Visnja Kisic, Secretary General of Europa Nostra Serbia, spoke about the ‘Smile at Subotica Initiative’ which campaigns for the protection of heritage sites against uncontrolled development; and the project ‘SOS Azulejos’ for the protection of Portugal’s heritage tiles (Grand Prix winner of a EU Prize for Cultural Heritage / Europa Nostra Award 2013) was discussed by Leonor Sa, Head of the Judiciary Police Museum. The second session put a spotlight on ‘Communication & Success Stories’ and was moderated by Sara Crofts, Head of Historic Environment, Heritage Lottery Fund. Luka Cipek, Project Manager at The Best in Heritage, an annual conference organised in Dubrovnik in Croatia in partnership with Europa Nostra, explained the various communication actions undertaken to promote the event throughout the year. James Davis, Programme Manager at the Google Cultural Institute, spoke about this fascinating cultural project developed by Google and guided the participants on a virtual tour through the exhibitions posted on the Google Cultural Institute website, among which are exhibitions on The 7 Most Endangered heritage sites 2013 and 2014.

The panel dicussions were held at the EU Info Point in Brussels thanks to the hospitality of Jimmy Jamar, Head of the European Commission Representation to Belgium.

As a result of these debates and networking events, participants realised that the challenges facing heritage NGOs in terms of off-line and online communication are similar across Europe. They therefore welcomed the opportunity to be able to share their experience with likeminded individuals and organisations and appreciated the practical solutions they found to the obstacles that they have been confronted with.

The Capacity Building Days are organised annually by Europa Nostra’s Office in Brussels, targeting different groups of participants and focusing on different core issues each year. The 2015 edition was addressed to Chief Executive Officers, concentrating on innovative management and funding models for heritage NGOs, whereas the 2017 edition will target Outreach Officers, focusing particularly on Youth and Education.

The Capacity Building Days are part of Europa Nostra’s three-year Network project ‘Mainstreaming Heritage’, which is supported by the Creative Europe programme of the European Union.