On 31 March 2022, OurWorldHeritage, Europa Nostra, and Global Heritage Fund jointly organised a webinar dedicated to the cultural professionals from Ukraine who are safeguarding the country’s cultural heritage during the war started by Russia’s army. It was attended by 22 speakers and 230 attendees from 45 countries. The event, spanning two hours, functioned as a platform to highlight the most pressing current needs of the Ukrainian cultural sector and to connect Ukrainian professionals with relevant organisations and institutions, including civil society initiatives, which could provide much-needed help. 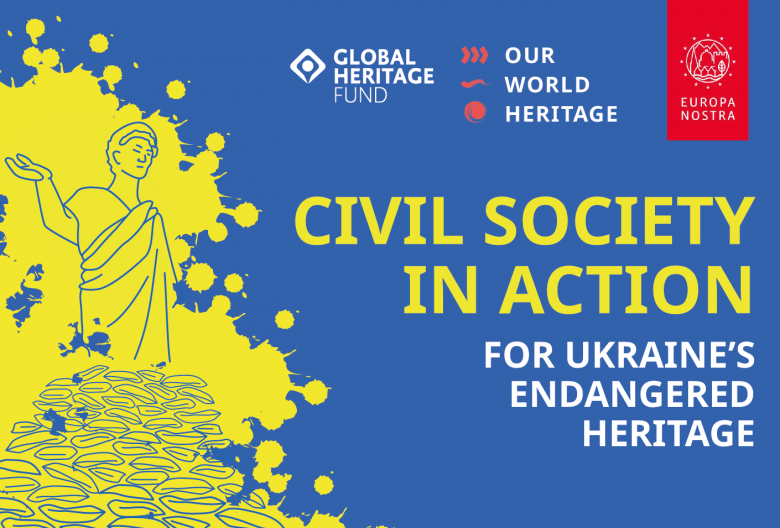 The introductory words of the event were delivered by Francesco Bandarin, heritage expert and former Director of the UNESCO World Heritage Centre, and Sneška Quaedvlieg-Mihailović, Secretary-General of Europa Nostra, who was also the moderator of the event. Francesco Bandarin expressed solidarity with Ukrainian citizens and underlined the importance of civil society response and active engagement – not just governmental partners – in a crisis centred on cultural heritage. Sneška Quaedvlieg-Mihailović highlighted that “this webinar is a platform for the Ukrainian colleagues” and that “the high number of participants that attended the event shows how much civil society cares about Ukraine”.

Current situation and needs in the Ukrainian cultural heritage sector

Among the speakers at the webinar, there were several cultural heritage professionals from Ukraine who offered an overview of the current situation. They mentioned the destruction of over 100 cultural objects, whether they be historical sites, monuments, museums and memorials, all of these having undergone shelling by Russian missiles. At the same time, numerous sites and monuments which had been in the process of restoration have seen the works come to a halt, which might lead to further damage. The danger of looting was also mentioned by the Ukrainian professionals, who emphasised that museums are greatly suffering from this situation, and that cultural artefacts are also in danger of illicit trafficking. In order to prevent damage to cultural buildings, many professionals have marked them with the Blue Shield label.

As far as the needs of the Ukrainian cultural sector go, the Ukrainian professionals mentioned the need for protective and packaging materials for cultural items and technical help regarding damage and risk assessment, practical items, such as fire extinguishers, as well as expert advice on the restoration and conservation of items and buildings. They also highlighted the need for guidance on specific situations like, for example, the takeover of a cultural institution by the Russian army. The humanitarian aspect of the war has also been particularly emphasised, as the cultural professionals in Ukraine need financial help and other first necessity items, such as food or medicines. In addition to the artists’ humanitarian needs, their professional needs have also been mentioned, with the possibility of linking, for example, visual artists to organisations that would facilitate art auctions.

Jorge Chaminé, President of the European Music Centre, also referred to the artists’ humanitarian and professional needs. He made reference to a new season in which Russian, Ukrainian and Belarussian classical musicians will perform together, as “music is the essence of peace”. At the same time, the Ukrainian colleagues mentioned that they are trying to remain hopeful and make plans for the future, expressing their need for help during the post-war reconstruction.

Ahead of the 45th session of the #WHCommittee, we urge for its relocation from #Kazan & the withdrawal of Russia’s Chairmanship. Copy of our appeal was handed over to @elounasso, Director of #WorldHeritage Centre at @UNESCO.#StandwithUkraine

Another key point mentioned by speakers at the webinar was related to the value of cultural heritage objects and sites when it comes to Ukrainian national identity, and their fundamental role in constituting both a unifying element and a danger. “The enemy seeks to destroy the Ukrainian nation with its rich history and raze it to the ground,” one participant stated.

Efforts that have currently been made in order to help the Ukrainian colleagues were also highlighted during the webinar. ICCROM and ICOM have offered consultation sessions, while Prince Claus Fund, the World Monuments Fund and the Estonian Ministry of Culture have sent protective equipment. ALIPH – the International Alliance for the Protection of Heritage in Conflict Areas has provided an initial US$2 million for its Ukrainian Action Plan to protect cultural heritage – sites, monuments, libraries, museums and archives. ALIPH has also granted US$1.3 million to provide over 60 museums with fire extinguishers, to fund the transport of equipment from Switzerland and to protect artefacts, and has been working with University College London to monitor heritage sites, and will also support the implementation of an emergency restoration programme for damaged artworks and artefacts with four mobile restoration laboratories, as outlined by Valéry Freland, ALIPH’s Executive Director.

Together with @GlobalHeritage Fund, we just launched a crowdfunding campaign to support the brave defenders of Ukraine’s endangered heritage.
We welcome donations, big or small, and thank you for your generosity & solidarity! #StandWithUkraine
DONATE NOW:https://t.co/f6zj7Bjley pic.twitter.com/0m9KlalRhs

Europa Nostra and Global Heritage Fund jointly launched on 18 March a crowdfunding campaign to help support cultural heritage professionals in Ukraine who are on the frontline. During the webinar, Nada Hosking, Executive Director of Global Heritage Fund, announced the current amount of $40,000 raised by this campaign and that GHF will donate an extra US$10,000 to bring the total raised up to $50,000. For the next phase of the campaign the ambition is to match this amount to reach US$100,000. Ms. Hosking powerfully appealed to all participants: “We all have platforms and we should all be using them. Everyone can help us get enough resources for our colleagues in Ukraine (…) they need basic needs, but they also need to protect their heritage and we should be there for them!”.

Sneška Quaedvlieg-Mihailović and Francesco Bandarin ended the event by wrapping up the key points discussed, underlining that this webinar was the starting point for wider action. “We can continue this dialogue and expand it, making it more structured to become a source of help (…) also in thinking about the future, which will be a great engagement for the Ukrainians and the international community“, said Mr Bandarin, who believes this upcoming network is fundamental to facilitate connections between different actors involved in the short and medium term. To conclude, they reassured the Ukrainian colleagues taking part in the event that they are not alone in what they are facing, on the contrary they are widely supported by a vast community of cultural professionals in Europe and beyond.