Today, Europa Nostra has addressed the Culture Council of the European Union on the role of culture and cultural heritage for the EU’s external relations. During their meeting on 23 May 2017, the Culture Ministers from all 28 EU Member States adopted and discussed “Council Conclusions on an EU strategic approach to international cultural relations”. Europa Nostra had been invited by the Maltese Presidency of the Council of the EU to demonstrate the full support of civil society and cultural institutes to the proposed Conclusions – together with European Union National Institutes for Culture (EUNIC). This is the first time Europa Nostra had been invited to speak at a Council meeting in Brussels and marks a new step in the recognition by EU Institutions of Europa Nostra’s work.

After Ministers had adopted the Council Conclusions in the session (snapshots prior to the start of the meeting can be seen here), European Commission Vice-President Federica Mogherini (watch her statement recorded after the meeting here) and EU Commissioner Tibor Navracsics provided their views on the document. Maltese Minister for Culture, Dr Owen Bonnici, who chaired the meeting, then introduced EUNIC – represented by its Director Andrew Murray – and Europa Nostra – represented by its Secretary General Sneška Quaedvlieg-Mihailović, as guest speakers. 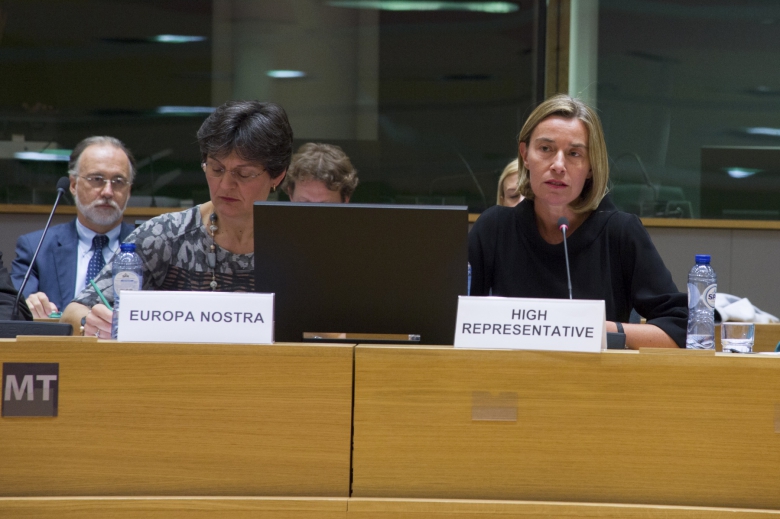 Europa Nostra congratulated the Maltese Presidency and the Council on the adoption of these important conclusions: “For us, the keywords of this strategy are: a cross-cutting approach and complementarity of action. We urge you to implement this strategy with audacity and imagination, both in EU’s bilateral and multilateral external relations.” Furthermore, on behalf of Europa Nostra Sneška Quaedvlieg-Mihailović acknowledged the foreseen involvement of civil society and stressed the role of cultural heritage: “As a civil society movement, we welcome the emphasis which your new strategy places on bottom-up approach, recognizing the key role of civil society and enabling their vital contribution. Together with our large European Heritage Alliance 3.3, we welcome the specific mention of cultural heritage as one of the three pillars of the EU’s international cultural relations. But we also wish to point out that heritage is a pivotal resource also for the two other key objectives, namely promoting sustainable development and intercultural dialogue.”

In particular, she encouraged Ministers “to promote Europe’s outstanding heritage skills and best practices, also in the framework of EU’s external relations”, thereby referring to the EU Prize for Cultural Heritage / Europa Nostra Awards, and with regard to the pan-European network of Europa Nostra she also urged Ministers “to put culture & cultural heritage much higher on the list of priorities in EU’s neighborhood & enlargement policy” and also “to make full use of the European Year of Cultural Heritage in 2018”. Europa Nostra’s Secretary General concluded her intervention by stressing that “Europa Nostra stands ready to be your civil society partner in developing an ambitious and effective strategy of EU’s international cultural relations.”

The Council Conclusions refer to the Joint Communication “Towards an EU Strategy for international cultural relations” of 8 June 2016 which foresees to reinforce cooperation on cultural heritage (see summary). Europa Nostra has already been consulted as expert by the European Committee of the Regions on the proposed strategy, which adopted an opinion in February 2017. In March 2017, Europa Nostra also met with representatives of the Cultural Diplomacy Platform in Brussels to discuss the role of cultural heritage in the strategy. The European Parliament is currently preparing a Report entitled “Towards an EU Strategy for international cultural relations” – Europa Nostra had been invited to comment on the draft report by Co-Rapporteurs Silvia Costa and Elmar Brok during a meeting of the Culture and the Foreign Affairs Committees in March 2017.