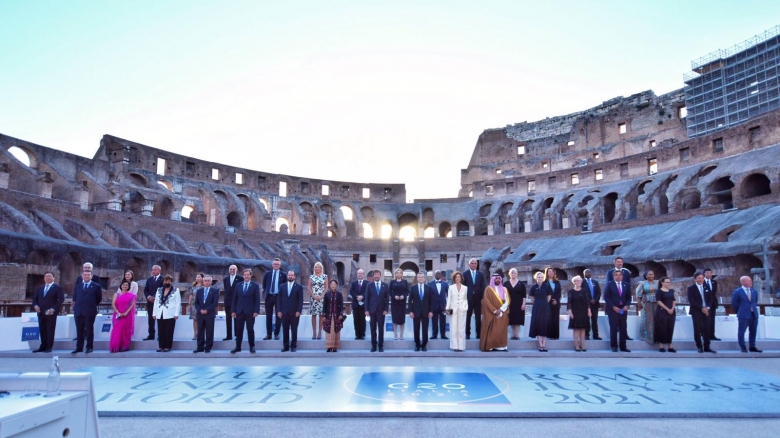 EUROPA NOSTRA, the European Voice of civil society committed to cultural heritage, applauds and endorses the Rome Declaration of the G20 Ministers of Culture, issued on 30 July as the main outcome of the G20 Culture Ministerial meeting held in Rome on 29 and 30 July 2021, under Italy’s Presidency and under the pertinent motto “Culture unites the world”.

Europa Nostra strongly welcomes the historic and much-needed recognition of the transformative power of culture by the leaders of the G20, the world’s leading forum for international economic cooperation. We also applaud the leadership of the Italian Presidency – both Prime Minister Mario Draghi and Culture Minister Dario Franceschini – for making culture a key priority of the G20 agenda and for having hosted, for the first time ever, a G20 Ministerial meeting entirely dedicated to culture in the stunning heritage settings of the Colosseum and Palazzo Barberini. These efforts not only attest to Italy’s world-renowned cultural heritage and cultural expertise and creativity, but also demonstrate the strong commitment of the Italian Presidency to place culture at the very centre of the global recovery and as a prime engine for sustainable, balanced and inclusive development.

Europa Nostra was pleased to contribute to the multi-stakeholders thematic webinar on climate change and culture, – organised by the G20 Italian Presidency in April 2021 to gather input and concrete recommendations -, by sharing the expertise acquired through our “European Cultural Heritage Green Paper: Putting Europe’s shared heritage at the heart of the European Green Deal” published by Europa Nostra in collaboration with ICOMOS and the Climate Heritage Network and with the support of the European Investment Bank.

We applaud the importance that the Rome Declaration attaches to the safeguarding of cultural heritage, being one of its five guiding principles. As an organisation committed to save endangered heritage in Europe and beyond – also through our flagship programme the 7 Most Endangered, run in partnership with the European Bank Institute -, we are pleased to see the prominence duly given to this vital topic, as well as the firm condemnation on G20 leaders to any deliberate destruction or damage to cultural heritage as well as illicit trafficking of cultural goods which belong to humanity as a whole. This is indeed a much-welcomed step forward in the global mobilisation to save endangered heritage around the world which Europa Nostra supports and to which we actively contribute.

Europa Nostra, together with other 20 organisations, had already urged the Italian Presidency of the G20 in a joint letter conveyed in July 2021 by a series of international and European heritage organisations, to show strong political support to the safeguarding of endangered cultural heritage. We are grateful that our voice was heard and our message duly incorporated in the final text of the Rome Declaration.

In this regard, Hermann Parzinger, Executive President of Europa Nostra, stated: “Many key issues affecting cultural heritage – such as climate change or illicit trafficking – go well beyond national borders and call for a global approach. Conversely, cultural heritage can offer solutions to tackle global challenges, from climate action and sustainable development to peace and confidence building, and from conflict resolution to prevention. Therefore, Europa Nostra firmly supports multilateral cooperation for cultural heritage and acknowledges that cultural heritage is not only local and national, but also European and of universal value to all humankind”.

Moreover, we applaud the fact that cultural heritage has been effectively mainstreamed into each one of the other four guiding principles of the Rome Declaration. While endorsing the call to action included in the Declaration, we seize this opportunity to add the following remarks:

Building Capacity through Training and Education

In the light of the above, Europa Nostra – together with our members and partners from all across Europe and the world – wishes to express our readiness to support the work of the G20, and in particular the newly established G20 Culture Working Group, on their vital efforts to promote culture and heritage-related policy and action at international, national and local levels. Europa Nostra stands ready to mobilise its network and expertise to become a key regional civil society partner of the G20 Culture on matters related to cultural heritage.

We also wish to reaffirm our commitment to a renewed global multilateralism, that allows for a more democratic, representative and inclusive participation from both governmental and non-governmental actors, and in particular civil society. Europa Nostra stands ready to contribute to the structuring and strengthening of a truly global and organised citizens’ movement for cultural heritage that shall act as an effective partner of international and intergovernmental institutions, including the G20, and as an overseer for good heritage governance at all levels.

To this effect, we applaud that the heritage professionals’ world was represented at the G20 Culture meeting by ICOM and ICOMOS, two eminent members of the European Heritage Alliance, which is coordinated by Europa Nostra. We were also pleased with the prominent participation of the world of Musea, via the Museo Egizio di Torino, winner of an European Heritage Award / Europa Nostra Award in 2020 and its Director Christian Greco.

“Tackling today’s global challenges effectively requires the coordinated cooperation of all actors: local, regional and national authorities, international and European organisations as well as civil society and private actors such as foundations and enterprises. In the current challenging global context, let us remind ourselves that if you want to go fast, go alone. If you want to go far, go together.” stated Hermann Parzinger, Executive President of Europa Nostra.

We hope these important steps forward shall lead to the rise of a future “C20”, as an international forum entirely dedicated to culture, which shall gather governmental representatives, international organisations as well as cultural actors and civil society.

Committed to contributing to this ambition, the important messages of the Rome Declaration shall be widely shared and further discussed at the European Cultural Heritage Summit “From the New European Bauhaus to a New European Renaissance” organised by Europa Nostra and its partners from 21 to 24 September 2021 in Venice. On this occasion, we are determined to build the necessary bridges and synergies between the G20 ministerial meeting on Culture, our Venice Summit, the pre-COP26 and COP26 meetings in Milano and Glasgow as well as the key policy priorities and programmes of the EU in relation to cultural heritage.