“It is our culture that makes Europe – Europe!,” writes Europa Nostra’s President Plácido Domingo in a prominent opinion article published on 8 January by one of Germany’s leading daily newspapers Die Welt, on the cover page of a special supplement (PDF, 5.4 MB) dedicated to the European Year of Cultural Heritage 2018.

The publication by DIE WELT of this special supplement coincided with the official launch event of the European Year in Germany, which was organised by the German Cultural Heritage Committee (DNK) on 8 January in Hamburg. 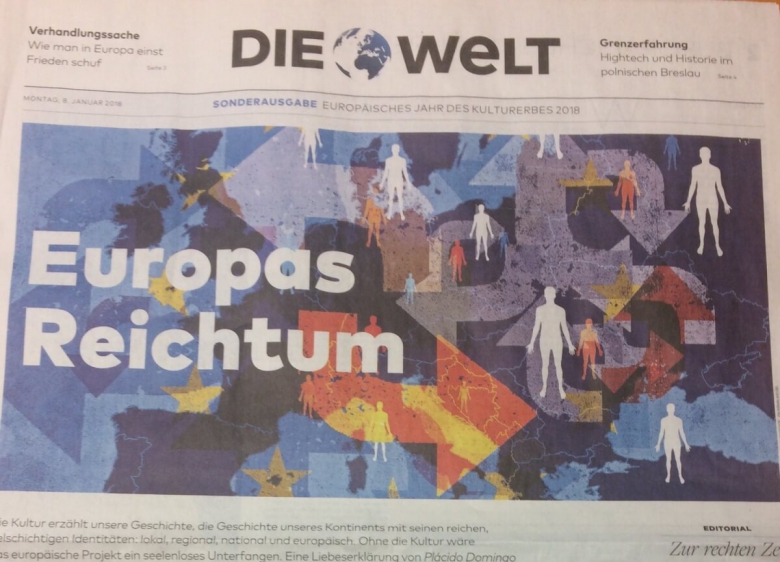 In this opinion article, Europa Nostra’s President explains why unity in diversity of our culture and identity is Europe’s biggest strength and resource. Maestro Domingo points to what unites Europeans and how culture should be at the heart of the European project. As President of Europa Nostra, he also emphasises the importance of protecting and safeguarding cultural heritage in Europe and worldwide – for the benefit of present and future generations. In this sense, the European Year of Cultural Heritage 2018 presents a unique opportunity to translate the current political momentum into concrete action, advocates Plácido Domingo, who will be co-hosting the European Cultural Heritage Summit 2018 and the European Heritage Awards Ceremony on 22 June in Berlin.

READ the full version of the article in German on the Die Welt website and the original text in English below.

Without culture, the European project would be a soulless undertaking, writes star tenor Plácido Domingo with conviction and describes in this article what “unity in diversity” means to him.

Today, Germany celebrates the official launch of the European Year of Cultural Heritage. This European Year is a true milestone for Europe, both for its citizens and its institutions. Why? Because it provides an opportunity for us, Europeans, to (re)discover the genuine European nature of our culture which is embedded in our shared heritage and history. We must use this shared cultural legacy as a solid bridge between all Europeans, as an expression of our shared values. This “Unity in Diversity” of our culture and identity is Europe’s huge strength and not a weakness. Europe can draw on this strength for creating more sustainability, more cohesion and more social justice. As well as a Europe which is open for creative exchanges and dialogue with other cultures of the world.

Considering Europe as a whole

Let me share with you what “being and feeling European” means to me. I was born in Spain but grew up in Mexico and spent most of my formative years outside of Europe. This gave me a different perspective. It made me look at Europe as a whole rather than as a mere collection of distinct nation states. I always saw Europe as one large cultural community. A community of countries, peoples and cultures that had much more in common than they realised. For me, this shared cultural legacy sounds like an enchanting “variations on a theme” composed on the basis of many diverse cultures which have inspired each other. They are intertwined and cannot be separated from one another. These “variations on a European theme” are the product of centuries, and even millennia, of interactions across time and space between so many peoples and so many communities.

Underneath all our colourful diversity beats one warm European heart. Today, this cultural legacy forms part of Europe’s DNA. It is indeed our culture which makes Europe Europe! It tells the story of us, Europeans, with our rich multi-layered identities: local, regional, national and European.

But we must remain aware that such strong feelings of belonging to a wider European community have never been fully embraced by all Europeans. We must therefore give every priority to raising public awareness of the deep historic and cultural bonds between European people, cities and countries which form the true basis of the on-going process of European integration.

If we fail to do so, we shall not be able to defend our societies from various forms of populism and nationalism which all too often, and especially today, seek to steer Europe in the wrong direction with local and personal interests prevailing over the pursuit of a shared vision and a common purpose.

Like so many Europeans, I was born under a dictatorship. This has taught me to value freedom, human rights, justice, openness and democracy. Europe should be the continent of lessons learned, not mistakes repeated. I strongly believe it can be. A hundred years after the end of World War I, Europe is once again at a crossroads.

Europe is so much more than just a geographical entity, an economic partnership or a military alliance. I strongly believe that our shared culture is the essential element of being a European. Without culture the European project is a soulless exercise. In today’s challenging times, it is therefore so vital to recognise that our shared culture must be at the very heart of the European project. “Recommençons aussi par la culture”, urged President Macron in his visionary speech on Europe delivered last September at a very symbolic place – the Pnyx in Athens. We applaud the subsequent joint initiative by French Minister Nyssen and German Minister Grütters to discuss, at the Frankfurt Book Fair 2017, ways to revive Europe through culture. The European Year of Cultural Heritage is a perfect platform for implementing this initiative and for giving a stronger emphasis to culture in the current debate on the future of Europe.

The destruction of memory is a crime

We live in a time of great transformations and our cultural heritage is our trusted anchor in an unstable and unpredictable world. We must therefore treat our heritage, which has been handed down to us by many generations of our ancestors, with due respect and care. We need to defend it from various forms of uncontrolled and unsustainable development as well as from serious environmental threats. We must ensure that the future generations will enjoy the right to their heritage in the same way we can ourselves enjoy it today. We also need to raise our voice whenever cultural heritage becomes a deliberate target of destructions during deplorable conflicts or wars. Targeting memory is a crime against humanity and we must prevent it and condemn it by all means. I strongly believe that heritage is as much about our past as it is about our future. Europa Nostra therefore advocates a holistic and future-oriented approach to our tangible and intangible heritage.

This heritage is vital to our identity and sense of belonging. It is also a key resource for achieving the UN’s Sustainable Development Goals in Europe and across the Globe. That is why I welcome so strongly the initiative taken by Donald Tusk, President of the European Council, to convene during the Social Summit held last November in Gothenburg, the first ever discussion between European leaders on the role of education and culture for the future of Europe. This commitment was subsequently confirmed in the form of pioneering conclusions adopted by the European Council on 14-15 December.

The European Year of Cultural Heritage, which has just commenced, provides us with an ideal opportunity to transform this political momentum into concrete action. That is why Europa Nostra, together with so many other heritage organisations, both public and private, advocate the need to develop an ambitious EU Agenda and Action Plan for Cultural Heritage.

A true Renaissance of culture and education

Such a European Heritage Agenda should enhance our shared sense of history and identity, provide additional financial support for the conservation, reuse, management, promotion and digitization of Europe’s often endangered cultural heritage whilst also creating rewarding new jobs, especially for our youth. Why could we not aspire to make use of the European Year of Cultural Heritage to mark the start of a true Renaissance of culture and education?

This Year will be filled with exciting and innovative activities organised by thousands of heritage organisations across Europe, and by countless public and private owners and managers of historic sites across Europe. One of the highlights of the Year will be the European Cultural Heritage Summit Sharing Heritage – Sharing Values on 18-24 June in Berlin.

Discussing the importance of cultural heritage

It will be co-organised by Europa Nostra, the German Cultural Heritage Committee (DNK) and the Prussian Cultural Heritage Foundation (SPK). It will bring together many European leaders, both from public institutions and civil society organisations, to discuss the vital role of our cultural heritage for the future of Europe. At the ceremony for the EU Prize for Cultural Heritage/Europa Nostra Awards to be held on 22 June, I will have the great privilege of honouring – together with highest representatives of EU Institutions – women and men from all parts of Europe who are the true “Guardian Angels” of our heritage. We are delighted that Federal President Frank-Walter Steinmeier has confirmed his participation and that other European leaders will also join us in Berlin.

Greatest gift to the world

Our cultural heritage is Europe’s greatest gift to the world. Let us celebrate and share it; explore and enjoy it; cherish and respect it! Let us also use it as an inspiration for new creations and new connections! Europa Nostra and I hope that as many Europeans as possible will embrace these vital messages and take an active part in this European Year of Cultural Heritage which has just started!

Plácido Domingo has been President of the organisation Europa Nostra, the voice of cultural heritage in Europe, since 2010. He became famous worldwide as an opera singer. The international career of the artist, who was born in Spain in 1941 and raised in Mexico, began with his debut at the New York City Opera in 1966. Since then, he has performed at all major opera houses throughout the world. He is also a conductor. He has received numerous awards and honours for his artistic work.