The European Heritage Heads Forum (EHHF) brings together the heads of the national heritage agencies and boards from 31 European countries – many of whom were actively involved in the European Year of Cultural Heritage 2018, often as national coordinator. For their 14th annual meeting in Stockholm, Sweden, the EHHF invited Europa Nostra to participate as civil society organisation and explore the way forward after the EYCH 2018.

Greetings from Stockholm 🇸🇪from our Vice-President @PJaspaert😀
A wonderfully inspiring discussion with the European Heritage Heads on how to better sustain & shape the legacy of the European Year of Cultural Heritage #EuropeForCulture🇪🇺#EuropeanHeritageAlliance #Heritage4Europe pic.twitter.com/9fJi9gWntE

Europa Nostra’s Vice-President Piet Jaspaert, who had been actively involved in the EYCH, joined the panel debate “EYCH – what next?” on 24 May together with Erminia Sciacchitano from the European Commission and Kathrin Merkle from the Council of Europe. After a short summary of the outcomes of the Sharing Heritage initiative by Dr Uwe Koch from the German Cultural Heritage Committee (DNK), the panellists engaged in a lively discussion which was chaired by Siim Raie, the Director General of the National Heritage Board in Estonia which will host next year’s meeting. During the debate, Piet Jaspaert reiterated that civil society organisations working in the heritage field – like the members of the European Heritage Alliance 3.3 – are willing and competent to cooperate with member states’ civil servants in developing and implementing cultural heritage policies.

Our Vice-President @PJaspaert is now in Stockholm for the 14th European Heritage Heads Forum, where he had the pleasure to meet HRH Victoria, Crown Princess of Sweden 🇸🇪👑 and introduce her to Europa Nostra’s work 👏 pic.twitter.com/y6wyHQ8GPp

As part of the overall programme of the 3-day meeting, the heritage heads were received by HRH Crown Princess Victoria of Sweden at the Royal Palace on 23 May. During a tour of the palace, the heritage experts were informed about the carefully undertaken renovation of the building. 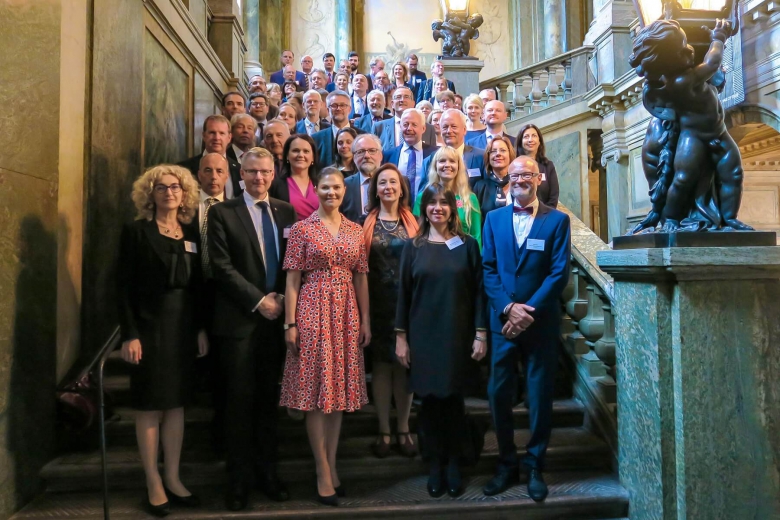 HRH Crown Princess Victoria of Sweden received the participants of the European Heritage Heads Forum 2019 at the Royal Palace in Stockholm on 23 May. © Henrik Löwenhamn – Swedish National Heritage Board

The annual EHHF meeting 2019 was hosted by the Swedish National Heritage Board, whose Director General Lars Amréus had been one of the speakers at the European Policy Debate during the European Cultural Heritage Summit 2018. In previous years, Europa Nostra’s Secretary General Sneška Quaedvlieg-Mihailović and Vice-President Piet Jaspaert participated in the meetings of the EHHF in 2017 (Iceland) and 2018 (Luxembourg) respectively.