In the framework of the ‘United Artists for Europe’ initiative imagined by the renowned French philosopher Bernard-Henri Lévy, an unprecedented exhibition and live auction took place on 3 June at the Hotel Café Royal in London. Coinciding with the European elections, this initiative celebrates our common European ideals, values and culture through a selection of thirty artworks donated by leading European contemporary artists. As one of the two NGO beneficiaries of this auction, Europa Nostra will allocate the funds raised to the restoration of the Delian Temple of Apollo in the UNESCO World Heritage Site of Delos, Greece, a heritage site with a symbolic value for Europe’s culture.

Just arrived in #London to attend the #unitedartistsforeurope live auction! Many thanks to Bernard-Henri Lévy @BHL & @simondepury & @ThaddaeusRopac & @HexagonSociety for this great European initiative & for their support to @europanostra work to save Europe’s cultural heritage https://t.co/AvWSh76cZe

The special charity auction evening on 3 June was attended by a delegation of Europa Nostra, composed of Sneska Quaedvlieg-Mihailovic, Secretary General, Simone Mizzi, Vice-President and Sara Crofts, Council member and Chairwoman of Europa Nostra UK. Bettany Hughes also attended as special guest of Europa Nostra. Following the presentation of the United Artists for Europe Manifesto by Bernard-Henri Lévy, auctioneer Simon de Pury and gallerist Thaddaeus Ropac, the sale of the artworks gathered many art enthusiasts who were bidding live and online.

“There is no Europe without a strong feeling and rooting in a memory, as well as the real prospect of a future. We have chosen two of the best NGOs who take care of our past, such as Europa Nostra with its commitment to help restore the Temple of Apollo in Delos, to benefit from this auction. Delos and its Temple of Apollo tell us the story of the past of Europe – about the founding mythology without which we would not be what we are today. Today’s event is not an end in itself, it is the start of a process as most artists present today are convinced that Europe can be rebuilt through art and culture” said Bernard-Henry Lévy during the event. 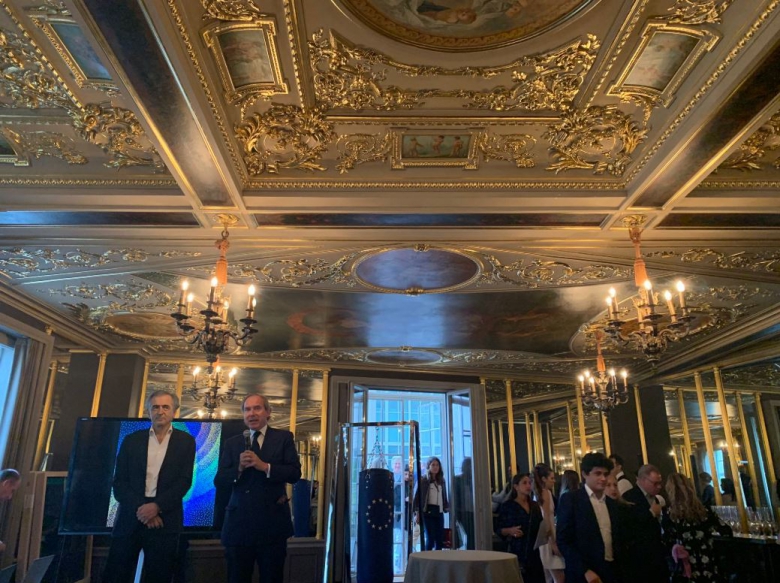 Hosted at Galerie Thaddaeus Ropac, Ely House, the preview exhibition of the auction took place from 21-24 May. It gathered a selection of artworks by artists from Europe or living in Europe, with a focus on European identity and the future of Europe. On this occasion, Bernard-Henri Lévy performed his new one-man play Looking for Europe, a one-of-a-kind play addressing the political context of each European country.

“I warmly applaud this initiative, which proves the commitment of artists to build a future Europe based on our shared culture. The Delian Temple of Apollo, the god of Arts, Music, Poetry, Light and Harmony, is one of the oldest remaining Greek temples and bears witness to the rich history of Greece and the whole of Europe. We are delighted that part of this amazing birthplace of our shared culture and values will be restored thanks to the funds raised.” stated Sneska Quaedvlieg-Mihailovic, Secretary General of Europa Nostra.

The project consists of an anastylosis – the re-erection of the antique columns of the temple that have lain on the ground for centuries, allowing the sanctuary of Apollo to be partly reborn from its ashes. It will be the first attempted restoration of this kind in the most famous sanctuary of Apollo in Antiquity. This exceptional rehabilitation project will be carried out by the Ephorate of Antiquities of Cyclades. Europa Nostra and its country representation in Greece, Elliniki Etairia, will advise and supervise the implementation of the project.

Already on 21 June, on the occasion of the Board and Council meetings of Europa Nostra in Athens, high-level representatives of our organisation had the unique opportunity to visit the heritage site of Delos thus confirming Europa Nostra’s commitment to helping and advising the Ephorate of Antiquities of Cyclades to preserve Delos for future generations in spite of the many changes posed to this site by climate change and the related rising levels of the Aegean Sea.