Europa Nostra and ALIPH – International Alliance for the Protection of Heritage in Conflict Areas – signed a Memorandum of Understanding to strengthen their joint efforts for the protection of cultural heritage with a particular focus on conflict and post-conflict zones in Europe and possibly in its neighbourhood. The signing of this important Memorandum of Understanding took place on 31 January 2022 at ALIPH 2nd Donors’ Conference in Paris, which was organised in the frame of the French Presidency of the Council of the EU. 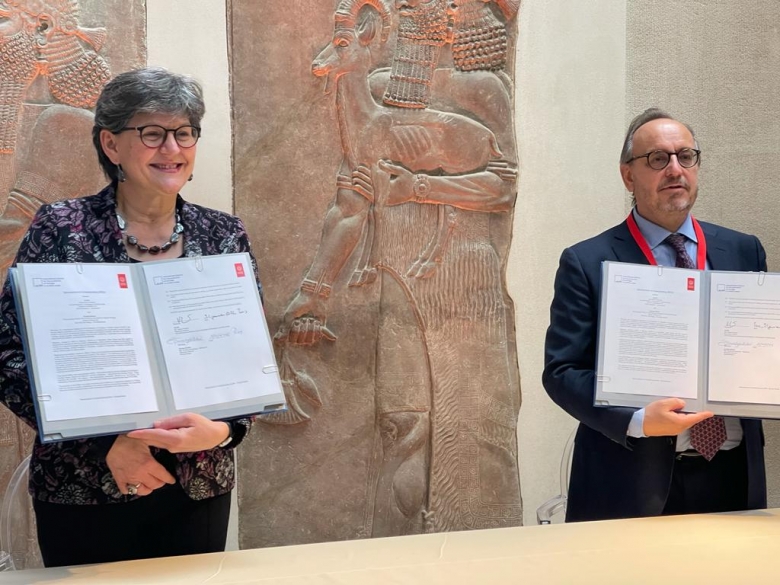 The Memorandum of Understanding details the collaboration between Europa Nostra and ALIPH – the International Alliance for the Protection of Heritage in Conflict Areas, including the:

The Secretary General of Europa Nostra, Sneška Quaedvlieg-Mihailovic, and the Executive Director of ALIPH, Valéry Freland, signed the Memorandum of Understanding just before the opening the ALIPH 2nd Donors’ Conference held in the Louvre Museum. Other Memorandum of Understandings were signed between ALIPH and major organisations in the field of cultural heritage, such as ICCROM, ICOM, ICOMOS and the French National Heritage Institute.

The Conference, marking the 5th anniversary of ALIPH, gathered prestigious speakers from all over the world, including the President of the French Republic, Mr Emmanuel Macron, who recorded a special video message, the Vice-President of the European Commission, Mr Margaritis Schinas, the Minister of Europe and Foreign Affairs of France, Mr Jean-Yves Le Drian, the Ministers of Culture of the United Arab Emirates, Saudi Arabia, Irak, Greece, Italy, Oman, China, Croatia, Cyprus, Morocco and France, as well as high representatives from UNESCO, Lebanon, Bahrain, France, Germany, Hungary, Kuwait, Luxembourg, Monaco, The Netherlands, Switzerland and the European External Action Service.

ALIPH is a unique international cooperation initiative designed to meet the challenges of protecting cultural heritage in conflict and post-conflict areas. Its three areas of intervention are: preventive protection to limit the risks of destruction, emergency measures to ensure the security of heritage, and post-conflict actions to enable local populations to once again enjoy their cultural heritage.

Europa Nostra stands ready and looks forward to cooperating closer with ALIPH as the protection of cultural heritage is vital for fostering mutual understanding, social cohesion and inclusion as well as a sense of belonging to a larger Europe family and much-needed peace-building processes in Europe and beyond. Together, we shall thus stress the relevance of cultural heritage for the EU’s external relations and reach out to the EEAS.

At @ALIPHFoundation Donors’ Conference held yesterday at @MuseeLouvre, I had the great pleasure of meeting EC VP @MargSchinas & presenting to him the Golden Jubilee Book “Fragile Earth” produced by #EllinikiEtairia, country representation of @europanostra in Greece. @sepiellet pic.twitter.com/daStxPLiZe

On the occasion of the Conference, the Secretary General of Europa Nostra, Sneška Quaedvlieg-Mihailovic, had the pleasure of meeting the Vice-President of the European Commission, Mr Margaritis Schinas, and presenting to him the Golden Jubilee Book “Fragile Earth” produced by Elliniki Etairia – Society for the Environment and Cultural Heritage, country representation of Europa Nostra in Greece.