The presentation of the Europa Nostra Award to the Tsarskoye Selo State Museum-Preserve for the restoration of the Agate Rooms took place on 12 September 2014 at the Catherine Palace in Puskin, Russia. The award ceremony was part of the global conference ‘Museums & Politics’ organised by the International Council of Museums (ICOM). Alexander Sayn-Wittgenstein-Sayn, Vice-President of Europa Nostra, Olga V. Taratynova, Director of the Tsarskoye Selo State Museum-Preserve, and Vladimir Tolstoy, President of ICOM Russia, hosted this high-profile event, which gathered some 350 people. 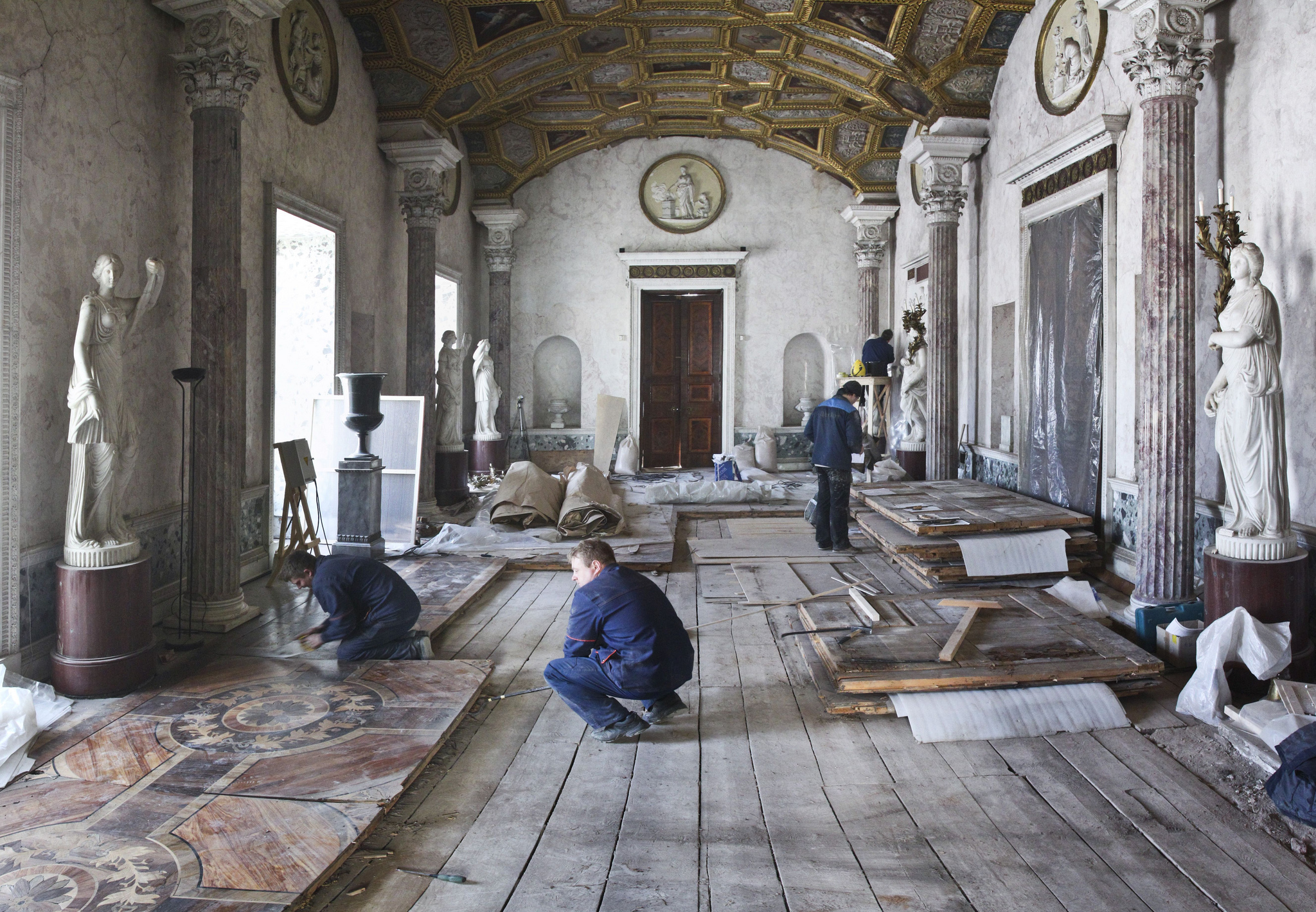 “The Europa Nostra plaque is a weighty award in all senses. It is a symbol of recognition of the incredible efforts made by our restorers, and of the methods that became the basis for our project. Following the main principle of the Venice Charter for the Conservation and Restoration of Monuments and Sites – ‘restoration ends where speculation begins’ – we were able to preserve the patina of time. Today, our visitors can appreciate the interiors of the Agate Rooms practically as they were during the era of Catherine the Great”, stated Olga V. Taratynova.

“The architectural historian Howard Colvin described the Agate Rooms as ‘some of the most exquisitely elegant interiors in 18th century Europe’, and seeing them returned to their full glory today, it is hard not to agree. We congratulate the conservators on their meticulous, scientific approach to restoring the rooms with the utmost historic accuracy, especially with such difficult to handle geological materials, such as jasper. This project is proof of the possibility – and distinct need – for authentic preservation,” stated Alexander Sayn-Wittgenstein-Sayn.

“All Europeans are as proud as you can be about what has been done here, the restoration of an exceptional piece of our common cultural heritage. And this is only part of the outstanding work that has been carried out in Russia in recent years to safeguard and restore your treasures – treasures, which have been and will always be a very essential part of our European culture,” stressed the Vice-President of Europa Nostra.

“The fact that the Jury awarded the Tsarskoye Selo Museum-Preserve this year is a great honour and a high appreciation of the brilliant work the restorers did in the Agate Rooms,” affirmed Vladimir Tolstoy.

Designed by Scottish architect Charles Cameron in 1780s, the Agate Rooms were once the private apartments of the Empress Catherine the Great. The seven interiors, one of the jewels of the Tsarskoye Selo ensemble, are both artistically and technically unique in the world. Following the extended and meticulous restoration carried out by the Tsarskoye Selo Amber Workshop Craftsmen, the Agate Rooms reopened in September 2013.

The award ceremony was followed by a guided tour to the Tsarskoye Selo State Museum-Preserve.