Around 1200 people from all over Europe assembled at the iconic Burgtheater to pay tribute to this year’s highest achievements in the heritage field and to celebrate Europe as a ‘symphony of cultures’, on the evening of 5 May. Androulla Vassiliou, European Commissioner for Education, Culture, Multilingualism and Youth, and Plácido Domingo, the renowned opera singer and President of Europa Nostra, hosted the European Heritage Awards Ceremony 2014. The musical performances by the great Viennese ensemble The Philharmonics, together with the Vienna Boys’ Choir and the children’s orchestra Superar, took the audience on a marvellous journey through the rich musical legacy of Europe. The ceremony was honoured by the presence of the Austrian Federal Chancellor, Werner Faymann, and the Minister for Arts and Culture, Josef Ostermayer. 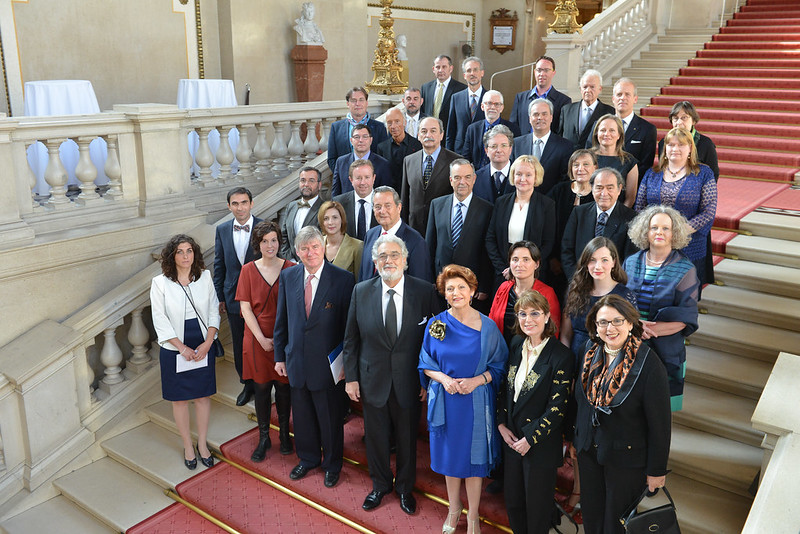 “Tonight, we celebrate individuals who are contributing to the worldwide image of our continent as a place of culture and heritage. Our winners were selected from a list of 160 projects involving 780 organisations from 30 countries. Competition was intense, proof that the European cultural heritage field is dynamic,” stated the Commissioner. “We want to help the heritage sector move with the times and that includes opening up to new management models, professional skills and modes of communication. There are a host of new EU instruments that need to be better known and mobilised. The contribution of heritage to growth and job creation needs to be highlighted and established on the political agenda,” stressed Androulla Vassiliou.

“Europe is so much more than a geographical entity, an economic partnership or a military alliance. Europe is a beautiful symphony of cultures! Our ‘chorus’ is held together by shared ethical and aesthetical values, and mutual respect and trust. We draw our strength and inspiration from all those cultural treasures which we inherited from past generations. They form the fertile soil on which our vitality, our creativity and our success as a continent will continue to grow. I am, indeed, convinced that by drawing from the ‘soft power’ of its culture, Europe will prevail: SUPERAR! However, just as every orchestra or choir needs the enabling leadership of an inspiring conductor, Europe and Europeans need visionary and committed leaders: leaders who seek to bring Europeans closer together; leaders who know how to listen to the aspirations and voices of the young generation and who motivate us to employ all our talents in furthering the European project,” advocated the President of Europa Nostra.

“I am very delighted that the European Heritage Awards Ceremony and Europa Nostra’s Congress are being held this year in Austria. I would like to highlight the Austrian Federal Government’s political commitment to the public funding of art and culture, and to the sustainable protection of our cultural heritage. Both of these priorities are firmly established in Austria’s Federal Finance Act – because art and culture are clearly among the responsibilities of the public sector and must not be measured on the basis of private-sector criteria alone,” stated Josef Ostermayer, Austrian Federal Minister for Arts, Culture, Constitution and Public Service.

“Together with the private heritage owners of Austria, we are ready to work alongside our politicians and leaders to make better rules and regulations, to come up with better solutions that will really work to help preserve our heritage,” affirmed Alexander Kottulinsky, President of the Austrian Castles Association, co-organiser of the Congress.

This year, three Austrian heritage achievements were recognised. The Gustav Klimt Memorial Society in Vienna won an award; the Liechtenstein City Palace in Vienna and Mag. Erwin Hameseder received special mentions. Alexander Sayn-Wittgenstein, in representing the Jury of the Awards, paid tribute to the special mentions from the host country.

The awards ceremony featured charismatic musical performances by the great Viennese ensemble The Philharmonics. One of the highlights of the evening was The Glorious Seven’s performance of ‘K.u.K Rhapsody’, vividly demonstrating that many different cultures and sounds can produce a harmonious melody. The moving voices of the legendary Vienna Boys’ Choir, reinforced by the children’s choir Superar, added a very special touch to the ceremony. The musical programme, which reflected the amazing creativity and diversity of Europe’s musical heritage, was enhanced by the imaginative light projections of the Austrian visual artist Victoria Coeln.

The ceremony was partially recorded by the Austrian national public broadcaster ORF. Two short news videos, featuring highlights of the ceremony and extracts from exclusive interviews with Minister Ostermayer, Commissioner Vassiliou, Alexander Kottulinsky and Europa Nostra’s Secretary General Sneška Quaedvlieg-Mihailović, were broadcast during prime time the day after the event.