As part of the activities of the Bauhaus of the Seas project, the City of Venice and the Ca’ Foscari University of Venice co-hosted the Bauhaus of the Seas Conference in the impressive Arsenale complex in Venice from 20 to 21 September 2021, on the eve of and in parallel with the European Cultural Heritage Summit. The Conference brought together EU policy-makers, representatives from coastal regions and cities of Europe, researchers and stakeholders to reflect on the relationship between the New European Bauhaus initiative launched by the European Commission and Europe’s oceans, coasts and seas. The event was organised in a hybrid format around six thematic panels on developing a vision for the New Bauhaus of the Seas, the environment, the role of ports, the role of cultural heritage, the role of communities and renewing practices. Europa Nostra actively contributed to the panel on cultural heritage, together with representatives of prestigious cultural, heritage and educational institutions.

Today at the @BauhausSeas #NEBVenezia Conference, our Secretary General @SneskaEN sends a strong message to 🇪🇺 leaders: “the time is NOW to put the care for our #culturalheritage at the very heart of Europe’s re-launch, and the #NewEuropeanBauhaus is the perfect opportunity”. pic.twitter.com/sm0DIRWsoK

Europa Nostra’s Secretary General Sneška Quaedvlieg-Mihailovic contributed to the panel discussion on cultural heritage, together with representatives from prestigious cultural, heritage and educational institutions, such as La Biennale di Venezia, Venice Civic Museums Foundation, the Peggy Guggenheim Collection Venice, the Conservatory Benedetto Marcello and the IUAV University of Venice. The panel focused on the role of culture and cultural heritage as catalysts for the identity of water cities, as well as the role of technology for their long-term sustainability.

In her statement, Sneška Quaedvlieg-Mihailovic reminded that Europa Nostra understands cultural heritage as a broad and inclusive concept encompassing tangible, intangible, digital and natural elements, including underwater heritage, coastal cultural landscapes, maritime ecosystems as well as traditional know-how related to the sea. She highlighted the vital link between humankind, the sea and maritime cultural heritage. “We cannot afford to be fragmented anymore! It is our shared responsibility to create a more sustainable future for our Europe!” she reminded.

At the @BauhausSeas Conference in #Venice,
our Sec Gen @SneskaEN reminds of the vital link between humankind, the sea & maritime #culturalheritage.
“We cannot afford to be fragmented anymore! It is our shared responsibility to create a more sustainable future for Our Europe!” pic.twitter.com/lRsRbdJaN0

Europa Nostra Secretary General also highlighted that cultural heritage is much more than a sector: “Cultural heritage is rather a vector to achieve the strategic objectives of the European Union: from sustainability to inclusivity and the green transformation”, she said. 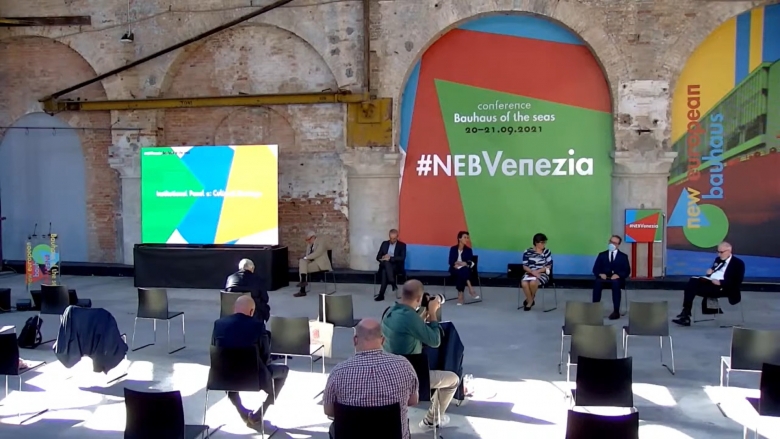 Roberto Cicutto, President of La Biennale di Venezia, quoted the world-renowned architect Renzo Piano, by stating that ‘any action to be undertaken in Venice, must consider two things: beauty and water’. “This is not a banal statement – we must start from the fundamentals,” he added.

Mattia Agnetti, Executive Secretary of Venice Civic Museums Foundation, reminded that “innovation is already within Europe’s museums and heritage institutions”, and recalled some relevant practices such as transforming energy consumption spaces, using digital technologies for the conservation of collections, and providing services and data to scholars and students.

Karole P. B. Vail, Director of the Peggy Guggenheim Collection Venice, addressed the need to develop cooperation and partnerships between museums and academic institutions for the preventive conservation of cultural heritage and to avoid and minimize future degradation and loss of heritage assets.

Roberto Gottipavero, Director of the Conservatorio di Musica Benedetto Marcello, highlighted the challenges of establishing connections between local communities and their cultural heritage, and pointed out the role of music to bridge this gap.

Last but not least, Benno Albrecht, Professor at IUAV University of Venice, highlighted the vital role of Universities in generating knowledge and promoting a humanist vision for Europe. He also called for an “eco-topia”, an ecological utopia of a more sustainable future, which requires a new way of thinking, designing and building.

During the lively session, speakers recognised the potential of culture, the arts, technology and cultural heritage to implement the ambitious objectives of the European Green Deal and for the successful implementation of the New European Bauhaus, duly taking into account the first and most decisive global natural space: the sea.