Europa Nostra actively contributed to the Conference ‘Creative Transformations: Culture for Democratic and Sustainable Europe’ organised by the Ministry of Education and Culture of Finland under the auspices of the Finish Presidency of the Council of the EU. The conference took place from 9–10 July 2019 in Helsinki, Finland, and was held in the Helsinki Music Centre. Europa Nostra, represented by Outreach Officer Lorena Aldana, was invited to contribute to a panel on how to create more fruitful synergies between culture, education and heritage policies to tackle the complex new social, economic and environmental challenges that Europe is facing.
Throughout the two-day conference, experts discussed the role of culture, heritage and creativity for the future of the EU and their contribution to achieving the Sustainable Development Goals (SDGs) set in the 2030 Agenda for Sustainable Development and adopted by all United Nations Member States in 2015. The conference themes included, among others, connections between culture and democracy and synergies between culture and education, as well as manifold presentations of relevant projects and new research findings. The Conference was attended by around 150 participants, including representatives from national and local administrations, European and international institutions such as the European Commission, the Council of Europe and the UNESCO, researchers and academics, professionals and civil society organisations. 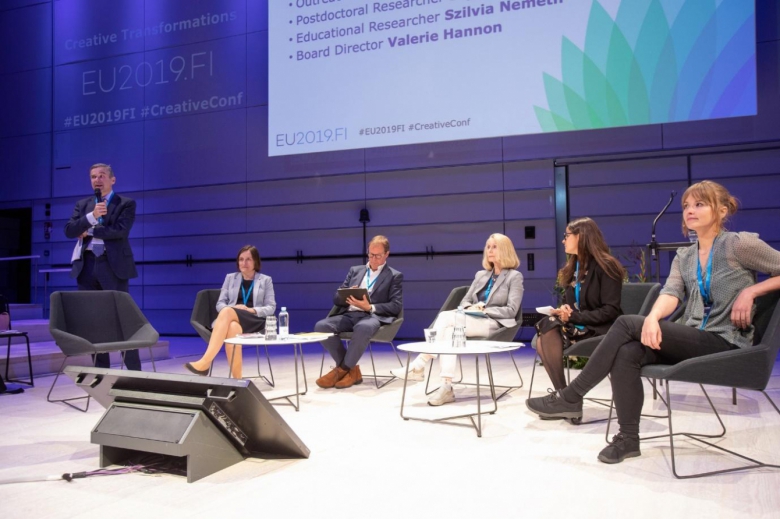 A bigger role for Europe’s cultural heritage in education
Outreach Officer Lorena Aldana presented Europa Nostra’s views and work on heritage and education, making a case for a much bigger role for Europe’s cultural heritage in educational activities – both formal and informal – for all ages. ‘In addition to fostering active citizenship, nurturing historical empathy and improving awareness of identity – from a local to a European one-, learning about and through Europe’s cultural heritage is a vital requirement to equip citizens with the necessary tools to interpret Europe’s shared past, understand its present and shape its future. Cultural heritage education can help building more respectful and meaningful relationships between people in today’s heterogeneous societies, both within and outside Europe, and between people and the living environment -which is key face the current climate crisis we are facing’ she added.

We’re delighted to have contributed to the #CreativeConf by the @EU2019FI in Helsinki, where our outreach officer @Dianel_Aldana presented our work on #heritage & #education, including good practices from the #EuropeanHeritageAwards pic.twitter.com/hs2HEedi5j

Learning from best practices
Outreach Officer Lorena Aldana also highlighted the European Heritage Awards / Europa Nostra Awards scheme as a valuable source of practice-led knowledge and a unique collection of good practices linking cultural heritage and education, which can be capitalised upon to improve policies and practice across Europe. Indeed, over 70 geographically and thematically diverse exemplary cases have been recognised by this prestigious Award Scheme under the category Education, Training and Awareness-raising since 2002. Europa Nostra’s Outreach Officer presented some concrete examples of awarded projects, including the creative primary school programme ‘The Great War through the eyes of a child’ developed in Roeselar, Belgium and the cross-curricular initiative ‘Heritage Schools’ in Bristol, United Kingdom. While presenting these cases, she focused on key learnings and success factors, many of which are easily transferable into other contexts.

The role of civil society and the future of education for development
Europa Nostra’s Outreach Officer stressed that civil society plays an important role in the formulation, implementation and evaluation of strategies for educational development, and can provide practice-led and specialized knowledge that is critical to improve heritage policy-making. During the discussions, Europa Nostra and other participants highlighted the need to involve civil society, together with governmental and research bodies, in designing educational policies contributing to sustainable development. During the concluding session of the Conference, Jordi Pascual (Secretariat of the Committee on Culture of UCLG), in his capacity as Rapporteur, called for a much stronger role of Civil Society at a global level to stress the contribution of culture and heritage to sustainable development, recognising the important work that Europa Nostra is already carrying out in Europe on this regard.

Jordi Pascual from @uclg_org calls for a Global Civil Society Voice stressing the contribution of culture & heritage to sustainable development, like the important work carried out by @europanostra & @actforculture in Europe