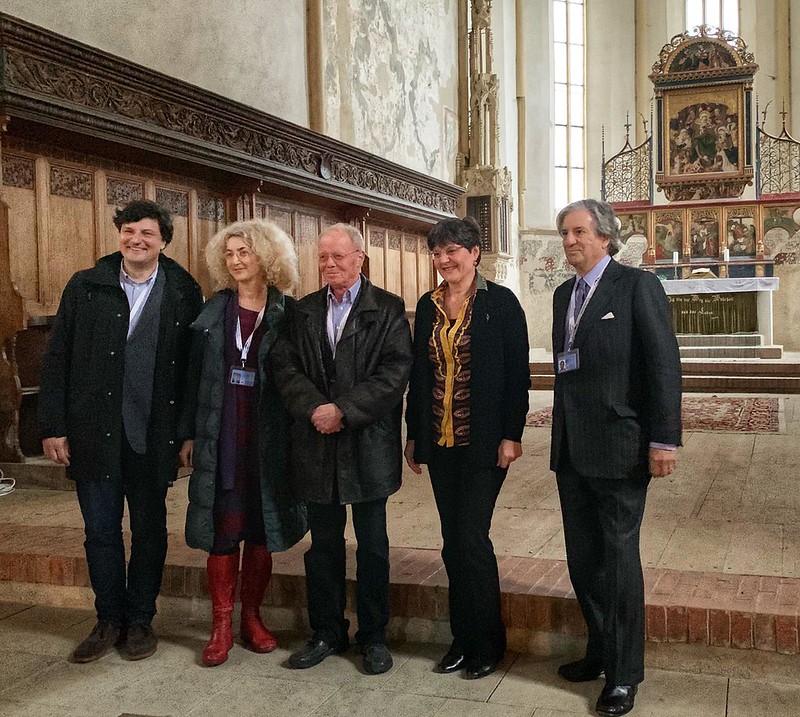 Europa Nostra actively contributed to the Conference ‘European Heritage: Shared experience and regional specificities’ organised by the National Institute for Heritage of Romania under the auspices of the Romanian Presidency of the Council of the EU and with the support of the European Commission. The conference took place from 10 – 13 April 2019 in Sighisoara, Romania. Europa Nostra partnered with the National Institute for Heritage of Romania to organise an expert panel, debate and exhibition entitled ‘Best practice examples awarded the European Heritage Awards /Europa Nostra Awards’ in the context of this important conference. In addition, Europa Nostra, represented by Secretary General Sneska Quaedvlieg-Mihailovic and Outreach Officer Lorena Aldana played a prominent role throughout the conference, contributing to the discussions by participating in different panels as speakers and moderators. Secretary General Sneska Quaedvlieg-Mihailovic closed the Conference with a powerful speech given during the concluding panel session, where she was the only representative of civil society among the speakers.

The Conference was attended by around 150 participants, including representatives from national administrations, European and international institutions, such as the European Commission, the Committee of the Regions, the Council of Europe and UNESCO, heritage professionals, civil society organisations and laureates of the European Heritage Awards /Europa Nostra Awards.

The objectives of the Conference were to discuss how to achieve a better integration of EU member states’ practices and approaches on quality interventions on cultural heritage, while addressing the regional and local specificities inherent to cultural heritage across Europe. Some of the topics addressed during the 2-day conference included quality principles on restoration, education, research, local community involvement and administrative and legal framework. Participants were encouraged to reflect on how to embed these principles in the next generation of EU funding programmes.

The Conference was an excellent opportunity to raise awareness of a Document outlining quality principles and guidelines for cultural heritage interventions in Europe. This hugely important work was started during the European Year of Cultural Heritage 2018, implemented in the framework of the 10 European Initiatives and more specifically within the European Initiative 6 “Cherishing heritage”. An expert group coordinated by ICOMOS (International Council on Monuments and Sites), working in close collaboration with the European Commission, produced the document. This document provided key input for the conference and served as a baseline for the discussions. The document, enriched by the outcomes of the Conference, was submitted for discussion to the informal reunion of Ministers of Culture held on 16 April in Bucharest in the context of the Romanian Presidency of the Council of the EU. In the succeeding Bucharest Declaration, the Ministers of Culture welcomed the outcome of the work on quality standards for EU-funded heritage and architectural projects.

During the first day of the Conference, Europa Nostra Outreach Officer Lorena Aldana took part in a panel entitled ‘The social impact and community factor’, where she stressed that civil society is not a passive recipient of information, but a proactive and equal stakeholder in heritage processes and projects. She noted that civil society should be involved in any heritage intervention from the very outset, and stressed that civil society engagement and ownership are in itself parameters of quality. She also presented the cases of St. Martin’s Chapel in Stari Brod, Croatia and the Winzerberg – Royal Vineyard at Potsdam-Sanssouci in Germany as two good practices with a strong community involvement that have been awarded the European Heritage Awards / Europa Nostra Awards. Other participants to the panel included representatives of Interpret Europe, the Global Heritage Fund, The Unitarian Episcopate and Monumentum Association. You can watch the whole panel here.

On the second and last day of the Conference, Europa Nostra’s Secretary General Sneska Quaedvlieg-Mihailovic participated in the conclusions and closing debate ‘A way forward’, held in a plenary session, where she was the only representative of civil society among panelists. Other speakers included representatives of the National Institute of Heritage of Romania and of the Romanian public administration, the Council of Europe and the European Commission. You can watch the concluding debate here.

In her applauded speech, Sneska Quaedvlieg-Mihailovic recalled the collective achievements of the European Year of Cultural Heritage 2018 and stressed the historical, shared responsibility to carry this movement forward, particularly in light of the upcoming EU elections. She underlined the need to address quality issues of all interventions related to heritage, including those not in receipt of EU funding, while keeping the focus on those who have received EU funding. Sneska Quaedvlieg-Mihailovic also pointed to the need to involve the private sector in the discussion on quality heritage interventions. Finally, she advocated for a stronger involvement of civil society in issues related to quality in heritage interventions, alongside a stronger commitment of governmental institutions at all levels of governance and a closer cooperation between the two Sneska Quaedvlieg-Mihailovic also called upon Romanian authorities, notably co-panelist Sergiu Nistor, Advisor to the President of Romania, to convey the importance of cultural heritage to EU Heads of States on the occasion of their informal meeting on 9 May in Sibu. ‘The road from Sighisoara to Sibiu is rather short’, she added.

“The road from Sighisoara to Sibiu is short. Let’s convey our message to EU heads of States on 9 May: Europe’s renaissance MUST start by cultural heritage” pic.twitter.com/vgRHTjzdCS

Europa Nostra co-organised and co-hosted an expert panel, debate and photo exhibition entitled ‘Best practice examples awarded the European Heritage Awards /Europa Nostra Awards’ held as part of the programme of this important conference. Speakers in the expert debate included representatives from both Europa Nostra and the European Commission, who jointly organise this prestigious Award scheme since 2002, as well as some award-winning projects: the Cultural Palace in Blaj, awarded with a Grand Prix for Conservation in 2018, the Culture Leap Educational Programme, awarded with the Grand Prix for Education, Training and Awareness-raising in 2018 and the Rimetea Heritage Conservation Project, awarded with a Europa Nostra Medal for Conservation in 1999. The photo exhibition included over 20 Award winning projects, including all the 11 Romanian Laureates, and was hosted in an inspiring venue that itself received an Award in the category Conservation in 2004; the Church on the Hill, in Sighisoara. Participants took this opportunity to make their own contribution to Europa Nostra’s #Ode2Joy Challenge and close the Conference on a high note. Watch the video here.