The United Nations Climate Summit was held on 21-23 September, as part of the United Nations General Assembly, with a pre-summit session focusing on the importance of protecting cultural and natural heritage from the impacts of climate change and the potential contribution of heritage in response.

The government of Greece led the discussions in collaboration with the United Nations Educational, Scientific and Cultural Organization (UNESCO), the World Meteorological Organisation (WMO) and the Secretary General of the United Nations António Guterres’ Climate Action Summit team. The purpose was to invite national and local governments, multilateral institutions, non-governmental organisations, academia and civil society to explore potential actions to support cultural heritage adaptation. The presence of civil society organisations at this meeting (ICOMOS and Europa Nostra) was of paramount importance since, it was acknowledged that civil society action might be the key to climate action.

Europa Nostra, represented by Board Member Pr. Paolo Vitti, actively contributed to address the devastating threats of climate change on tangible and intangible cultural heritage in Europe and beyond. Along the meeting chaired by Andrew Potts (President of the Climate Change and Heritage Working Group , Washington – ICOMOS) in the UN headquarters, Paolo Vitti presented solutions to support mitigation and adaptation strategies using traditional knowledge as well as argued upon the power of civil society action against climate change. 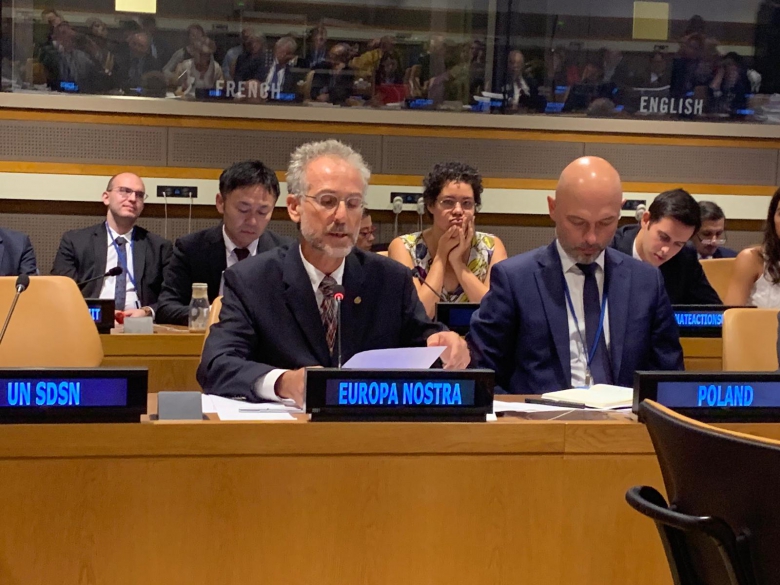 Europa Nostra, active in sensitizing the governing bodies and policy makers, once again stressed out the fact that cultural heritage is often only perceived as a driver of economic growth while its prominent societal value is being underestimated. In his speech, Paolo Vitti communicated the potentially fundamental role of cultural heritage in proposing sustainable models for future development and called upon the support of actions and cooperation schemes between different stakeholders to protect cultural heritage. Paolo Vitti’s intervention also focused on the need for civil society action to ensure cultural resilience in times of change and delivered Europa Nostra’s commitment to continue to raise awareness and build bridges towards that direction. The coming European Cultural Heritage Summit 2019 he added, “aims to put forward a renewed and stronger political commitment towards cultural heritage, and make the case for adequate funding”.

Today at #UNHQ in NYC, governments & civil society have joined forces to promote a stronger partnership between #ClimateAction & #CulturalHeritage. We are proud that our Board member @pauvitti, spoke at this important meeting hosted by #Greece, alongside @AndrewSPotts of @ICOMOS pic.twitter.com/s7OR2l1jAY

As an outcome, in a united front, Europa Nostra together with the Greek Minister of Education Ms Niki Kerameus launched a message for a wider solidarity and responsibility between countries concerning our shared goal, as one of the main objectives to be pursued.

This pre-summit event followed the Conference on Climate Change and Cultural Heritage organised by the Greek Government in Athens on 21-22 June 2019 where Europa Nostra had advocated again the urgency for climate action through its President, Maestro Plácido Domingo.

Europa Nostra, as part of its policy agenda for climate action, is also contributing to the launch of the new Climate Heritage Network, an innovative partnership designed to enhance coordination on climate change and cultural heritage at the international, national, subnational, institutional and policy levels aiming at tackling climate change and achieving the ambitions of the Paris Agreement for a more sustainable future.