The Secretary General of Europa Nostra, Sneska Quaedvlieg-Mihailovic, contributed to the colloquium “What future for European Civilisation?” organised on 15 May 2019 by the Collège des Bernardins concluding the 2-year research seminar “Past and Future of the European Civilisation”. Upon invitation from Antoine Arjakovsky, co-director of the Collège des Bernardins’ research department, the Secretary General participated in a round table focusing on the future of Europe based on the 10 proposals of the publication “Retrouver le goût de l’aventure européenne”. Exactly one month after the Notre-Dame tragedy and just a few days before the crucial European Elections, she shared her views on the need for a relaunch of the European project based on our shared culture, heritage, history and values. This debate was all the more symbolic since it took place at the Collège des Bernardins the exemplary restoration and revival of which was awarded a Grand Prix of the EU Prize for Cultural Heritage / Europa Nostra Award in 2010. 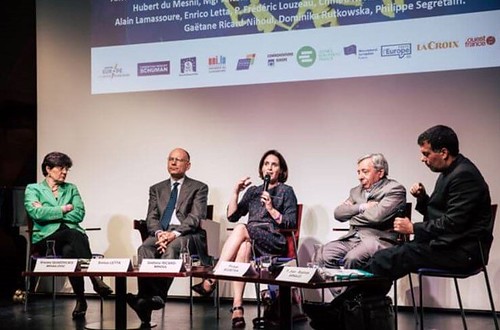 The full-day event kicked-off with a performance of the European Anthem – the “Ode to Joy” – by the youth choir of the Cité Universitaire de Paris conducted by Gabriel Bourgoin, as a contribution to Europa Nostra’s #Ode2Joy Challenge. It was followed by the first round table “The new European personalist humanism: personalist, inclusive and ecological” with the participation of Professor Frédéric Louzeau, director of the Collège des Bernardins’ Research department ; Anne-Lorraine Bujon, chief editor of the Esprit magazine ; and Alain Lamassoure, MEP and president of Pax Europa, who highlighted the need of a common narrative and a common European awareness. In the frame of the French Presidency of the Council of Europe’s Committee of Ministers, Alain Lamassoure was appointed by the French government to carry a feasibility study on the creation of an Observatory of history teaching in the EU Member States.

🎶 Musical kick-off of the colloque “What future for European civilisation?” at @CBernardins today! A Youth Choir from @ciup_fr in Paris has reinterpreted the #Ode2Joy conducted by @gabrielbourgoin 👏🇪🇺 Great inspiration ahead of today’s discussions with our SG @SneskaEN! 🗣️ pic.twitter.com/oVtXY3je1z

Sneska Quaedvlieg-Mihailovic intervened in the second round table “Time for proposals”, alongside Enrico Letta, President of the Jacques Delors Institute, former Italian Prime Minister and Dean of the Sciences Po School of International Affairs, whose presentation focused on “The environment and technology for the future of Europe”. Gaëtane Ricard-Nihoul, diplomat at the Ministry of Europe and Foreign Affairs and former Deputy Secretary General for Citizens Consultations on Europe, and Philippe Segretain, member of the Council of Semaines Sociale de France also participated in the panel discussion.

Our Secretary General started by recalling the success of the European Year of Cultural Heritage in 2018 and the unprecedented mobilisation of all heritage stakeholders. The terrible fire that devastated Notre-Dame was yet another proof of the mobilising power of heritage, but also of the need for improved mechanisms and increased resources to better ensure its safeguard. “500 years ago, one of the revolutions of the Renaissance was to humanize our way of thinking and our society. Today, 500 years later, one of the revolutions for a new European Renaissance would be to put our common culture and cultural heritage where it belongs – at the very heart of the European project,” she stated.

To end the event, a debate in reaction to the proposals convened Baudoin Baudru, Deputy Head of the European Commission Representation in France, Chiheb M’Nasser, Director general of the Foundation for Islam in France, and Antoine de Romanet, Bishop in the French armed forces.

During the day, several artists echoed the discussions: an exhibition of cartoons about Europe by the Cartooning for Peace association, spontaneous drawings in reaction to the debates by graphic facilitator Alexia Leibbrandt, an interpretation of the European Anthem by the choir and a musical performance by Thea-choir and Compagnie Chœur en Scène.

The 2-year long research project “Past and Future of the European civilisation” seeked to contribute to the debate on the future of the European Union and also to the work of the Parliamentary Assembly of the Council of Europe. Its aim was to reassess the philosophy of Europe’s founding Fathers by advancing 10 major proposals for Europe on themes such as education, culture, media, economy or migration. Among these proposals, the 6th proposal which advocates the need to set up and foster a genuine European cultural policy is fully endorsed by Europa Nostra.