The Europa Nostra Heritage Hub in Kraków will showcase best practices carried out in the field of cultural heritage by non-governmental organisations in Kraków, Poland, and the wider region of Central and Eastern Europe. It is conceived as a platform to strengthen the European voice of civil society organisations from this part of Europe and support them in shaping heritage related policy and action at European level. The Kraków Hub will combine the formula of a think-tank and do-thank, an observatory and a laboratory.

The activities undertaken by the Kraków Hub will be two-fold: 1) to serve the objectives of Europa Nostra in Central and Eastern Europe, Poland and Kraków (transfer of knowledge and competences, and networking, among others); and 2) to integrate Poland’s achievements in the field of cultural heritage into the European and international scene.

The activities of the Hub will turn Kraków into one of the most important heritage drivers and laboratories in Europe – next to The Hague and Brussels, where the Europa Nostra Secretariat is based, and Athens, where another Europa Nostra Heritage Hub has also been established to cover the region of South-Eastern Europe and the Eastern Mediterranean, as well as other heritage cities across the continent. 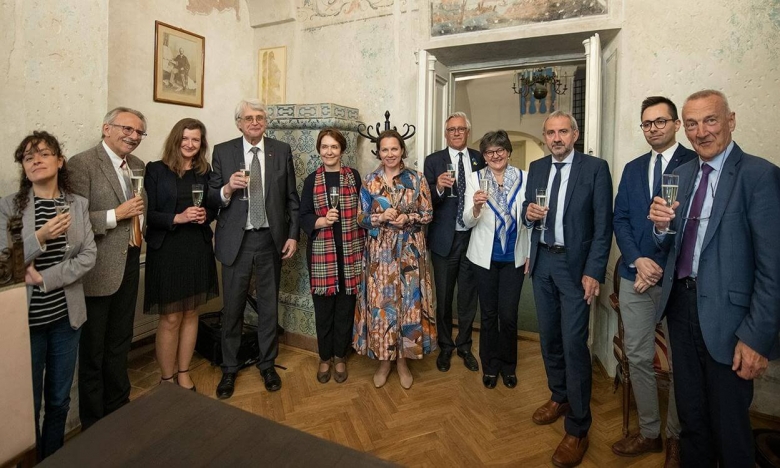 Representatives from Europa Nostra and The Society of Friends of Kraków History and Heritage met on 9 May at the historic premises of the Society in Kraków. Photo Credits: Courtesy of The Society

The Hub in Kraków will advance the agenda of Europa Nostra in the region of Central and Eastern Europe, including by maintaining closer relations with members, establishing new contacts and encouraging members to cooperate among them. This will in turn contribute to a wider exchange of heritage knowledge and expertise in the region. The Hub in Kraków office will also initiate projects with the participation of non-governmental organisations and other entities shaping heritage policy – such as local governments, cultural institutions, universities and research centres.

During the 41st session of the UNESCO World Heritage Committee, hosted by Kraków in 2017, for the first time in the Committee’s history, non-governmental organisations took the floor. Their message was read out at the assembly by the Secretary General of Europa Nostra, Sneška Quaedvlieg-Mihailović. The activity of the Hub in Kraków will build upon this momentum and will constitute yet another step towards strengthening the position of non-governmental organisations dealing with cultural heritage, whose tradition in the city dates back to the 19th century.

The Society of Friends of Kraków History and Heritage (Towarzystwo Miłośników Historii i Zabytków Krakowa) celebrates its 125th anniversary in 2022. It is one of the oldest non-governmental organisations in Poland. As a longstanding Member Organisation of Europa Nostra, the Society is actively involved in shaping the European civic model of thinking about and acting for heritage. The Society is the oldest Polish member of Europa Nostra, and its president, Professor Jacek Purchla, is also Europa Nostra’s Vice President.

On 9 May 2022, on Europe Day, the Memorandum of Understanding on the establishment of the Europa Nostra Heritage Hub in Kraków was signed by the Mayor of Kraków, Professor Jacek Majchrowski, and the Executive President of Europa Nostra, Prof. Dr. Hermann Parzinger. At the end of June, the Society won a competition for the operator of the Hub launched by the Department of Culture and the National Heritage of the City of Kraków.

The Kraków Hub will be managed by Dr. Katarzyna Jagodzińska, museologist, culture manager, public relations specialist and cultural journalist. She is an assistant professor at the Institute of European Studies at the Jagiellonian University, and programme director at the Toy Museum in Krakow (run by the NGO since 2020). Previously for many years she worked in the International Cultural Center in Krakow (2005-2020) and was member of the research team of the “Cultural Heritage Counts for Europe” Consortium.