Europa Nostra held its Board meetings in Valletta from 16 to 19 March 2017 on the occasion of the Maltese Presidency of the Council of the EU, that is one year before Valletta will be European Capital of Culture 2018 and before the European Year of Cultural Heritage 2018. 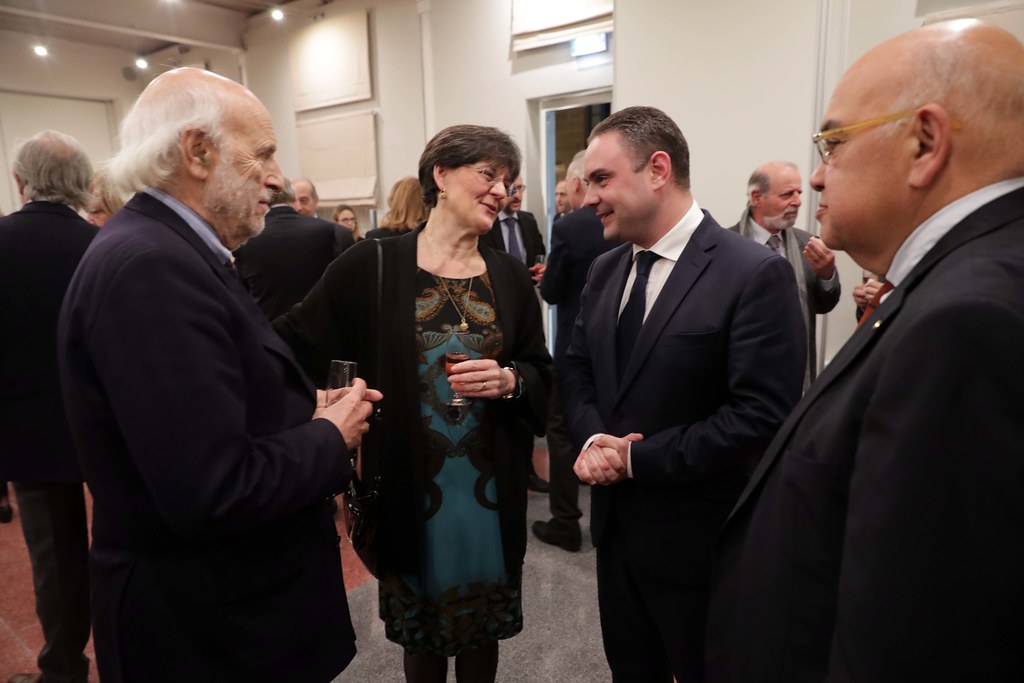 Head of European Commission representation welcomed Europa Nostra in Malta
European policy issues were the key topics discussed among Board members, Vice-Presidents of Europa Nostra and the Chairpersons of the four Juries of the European Union Prize for Cultural Heritage / Europa Nostra Awards during the first day of the meeting which took place appropriately at Europa House in Malta. Ambassador Dr Elena Grech, Head of the European Commission Representation in Malta, welcomed the Europa Nostra delegation and presented a book on successfully restored and EU funded heritage sites in Malta to Executive President Denis de Kergorlay. The Board debate focussed on the European Year and the upcoming celebrations of the 60th anniversary of the Rome Treaty on 25 March 2017 as well as the ongoing discussion of the future of Europe.

Launch of civil society campaign for European Year of Cultural Heritage: #Heritage4Europe
A key moment of the meetings was the evening reception at the recently restored Fort St. Angelo on Birgu in the presence and under the patronage of the Hon. Dr Owen Bonnici, Minister for Justice, Culture and Local Government of Malta, and many high-level representatives of heritage stakeholders in Malta. Europa Nostra launched the slogan for its civil society (social media) campaign for the European Year of Cultural Heritage 2018: #Heritage4Europe!

“During the European Year of Cultural Heritage in 2018, we will make sure that heritage is used as a vehicle for conveying a positive message for Europe and a cohesive message for us Europeans!,” said Europa Nostra’s Secretary General Sneška Quaedvlieg-Mihailović when presenting the slogan.

Culture Minister of Malta stressed key role of NGOs for heritage preservation
The reception was also an opportunity to recall the importance of European cooperation as Fort St. Angelo, an iconic monument built by early Europeans as a bastion for European values, is one of the sites restored thanks to European and national funding. Minister Bonnici also stressed the valuable contribution of NGOs in safeguarding cultural heritage in Malta. Europa Nostra’s Executive President Denis de Kergorlay, who had come back to Malta for the first time since Europa Nostra Congress in 2006, congratulated the Minister and the Maltese for impressive restoration efforts of very high quality. However, he also shared Europa Nostra’s concerns about the future of heritage ensembles and urban and cultural landscapes in Malta dFAngeloue to risks of overdevelopment. He therefore appealed to citizens and authorities alike to make the right choices for the future of the priceless, yet fragile, heritage of the entire island of Malta. To underpin his call for adopting responsible and respectful attitudes towards the future of Malta’s heritage, he handed over the Report ‘Cultural Heritage Counts for Europe’ to the Minister, thus stressing the huge value and positive impact of cultural heritage on Europe’s society, economy, culture and environment.

Europa Nostra concerned about increasing threats to Malta’s unique cultural heritage
The second part of the Board meeting was hosted by one of Europa Nostra’s longest standing member organisations, Din l’Art Helwa, whose Vice-President and Europa Nostra Board member Simone Mizzi outlined alarming threats to Malta’s unique urban and rural landscape from disproportionate developments (including the proposed high-rise building developments located too close to the World Heritage City of Valletta) in a session dedicated to heritage in danger. Simone Mizzi also presented some success stories: thanks to the tremendous efforts and dedication of many volunteers, Din l’Art Helwa’s work has already saved much of Malta’s unique cultural heritage as Board members were delighted to learn. Towards the end of the meeting, Europa Nostra’s Executive President Denis de Kergorlay was presented with the 50th anniversary publication of the organisation entitled “Heritage Saved. Din l-Art Ħelwa 1965-2015” written by Stanley Farrugia Randon. A stunning example of a saved heritage treasure is the Church of Our Lady of Victory, the first church built in Valletta in 16th century after the Great Siege, which the Europa Nostra delegation visited after the meeting.

The Europa Nostra Board meetings were preceded by a high-level conference on cultural diplomacy that took place on 9 March 2017 with Europa Nostra’s Secretary General Sneška Quaedvlieg-Mihailović as one of the speakers on the key role of cultural heritage in fostering EU’s international cultural relations.