On 2-3 December 2016, Abu Dhabi in United Arab Emirates (UAE) hosted a historic Conference for the Protection of Cultural Heritage in Conflict Areas, bringing together Heads of States and Ministers from over 40 countries as well as representatives from international organisations. Co-organised by France and the UAE, and held under the patronage of UNESCO, this high-profile meeting was closed by the President of France François Hollande, Crown Prince of Abu Dhabi Sheikh Mohammed bin Zayed Al Nahyan and UNESCO’s Director-General Irina Bokova. Europa Nostra’s Secretary General Sneška Quaedvlieg-Mihailović was among the invited speakers. This historic conference culminated with the adoption of the Abu Dhabi Declaration, which sets up an international fund based in Geneva and a global network of safe havens to safeguard endangered cultural heritage. 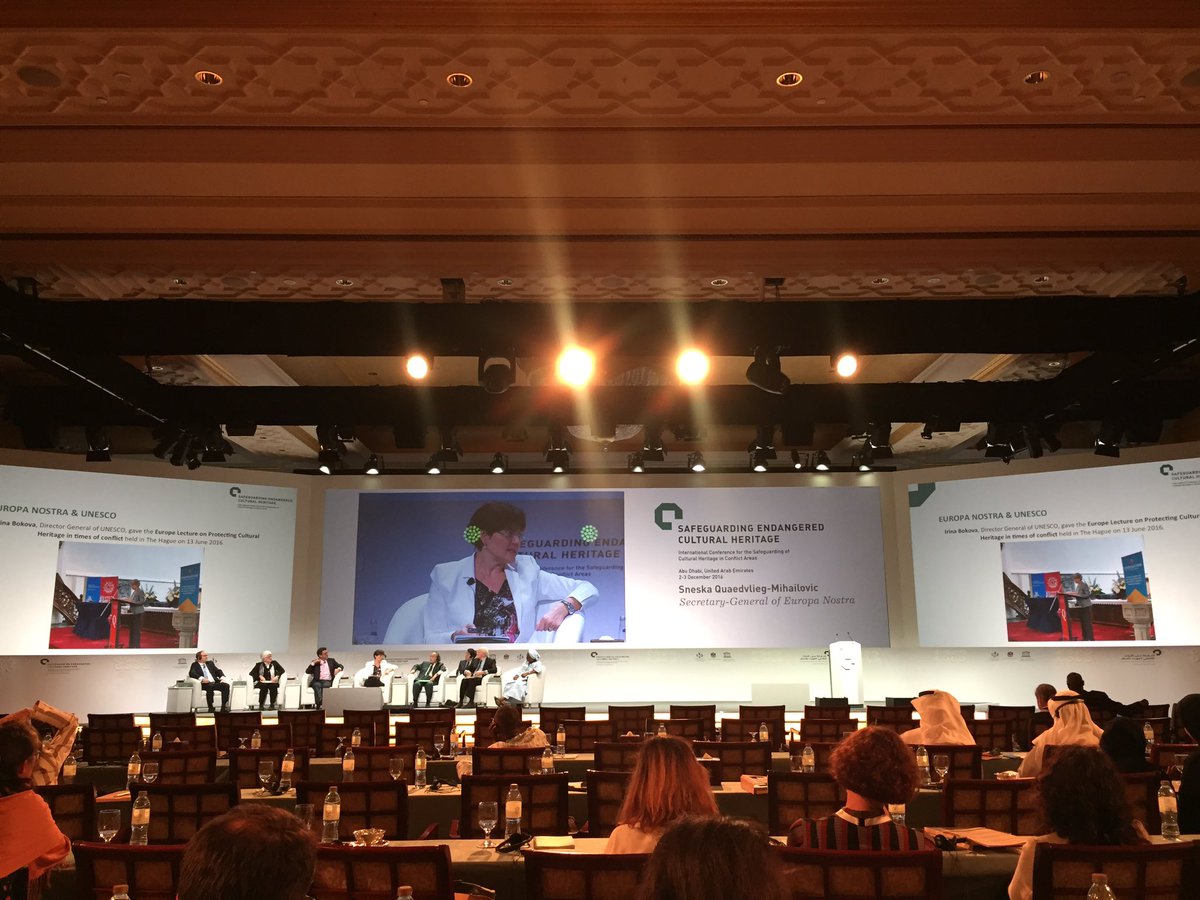 Europa Nostra’s Secretary General was honoured to be the voice of Europe’s civil society at the panel discussion ending the first day of the conference. This round table revolved around “Post-conflict rehabilitation of heritage” and was moderated by Francesco Bandarin, UNESCO’s Assistant Director-General for Culture.

“It was impressive to witness such a high-level mobilisation of world leaders to work together to save cultural heritage endangered by conflicts. This welcome move was prompted by recent alarming cases of deliberate destruction of heritage especially in Iraq, Syria, Yemen and Mali. However the scope of future enhanced international cooperation will be universal and not limited only to these regions,” stated Sneška Quaedvlieg-Mihailović upon her return from Abu Dhabi. “The value of and the need for public-private partnerships was clearly highlighted at the conference. This is very encouraging,” added the Secretary General of Europa Nostra. “To end, I wish to pay special tribute to Irina Bokova, Director General of UNESCO, for her effective leadership in encouraging world leaders, led by President Hollande and Sheikh Mohammed bin Zayed, to form a grand coalition for saving cultural heritage before, during and after conflicts”.

The Abu Dhabi Declaration calls for “the creation of an international fund for the protection of endangered cultural heritage in armed conflict, which would help finance preventive and emergency operations, fight against the illicit trafficking of cultural artefacts, as well as contribute to the restoration of damaged cultural property”. It also urges “the creation of an international network of safe havens to temporarily safeguard cultural property endangered by armed conflicts or terrorism on their own territory, or if they cannot be secured at a national level, in a neighbouring country, or as a last resort, in another country, in accordance with international law”. The Declaration concludes with a clear affirmation of support for the role of the United Nations and its institutions, particularly UNESCO, and an appeal to the United Nations Security Council to support the achieving of these goals. The adoption of a related framework Resolution at the UN Security Council is expected to take place in the first half of 2017.

“One year ago, we adopted the Paris Climate Agreement at the COP 21 for the preservation of our planet for future generations. Today we adopt the Abu Dhabi Declaration, with concrete measures and new tools to protect the legacy of our ancestors,” stated President Hollande. “This new international fund will provide much needed resources to protect heritage under attack, and will be managed in close coordination with UNESCO, in respect of UNESCO Cultural Conventions and International Norms,” he added.

“This conference gives us the chance to call upon governments worldwide to work together to safeguard global human heritage, which has been, as a result of civil wars, conflicts, terrorism and trafficking of antiquities by criminal gangs, more endangered than ever. These disruptions and crimes aim at erasing the memories of entire nations and destroying their human heritage. Needless to say, any damaging actions against our human heritage are rejected by all religions, norms and international charters,” affirmed the Crown Prince of Abu Dhabi.

“This initiative and the creation of this fund break new ground. I see this as the starting point of something larger – a new commitment for culture, education and human dignity,” said UNESCO’s Director-General Irina Bokova, highlighting the importance of a coordinated approach for the safeguarding of heritage.

On this occasion, President Hollande and other top-level representatives took part in a ceremony to mark the United Arab Emirates Day on the evening of 2 December and in a guided tour of the future Louvre Abu Dhabi Museum by the architect Jean Nouvel on the morning of 3 December. The Louvre Abu Dhabi, one of the most symbolic expressions of the partnership between France and the UAE, will open to the public in the coming months.

Pope Francis also gave his support to the conference, whose theme considered “unfortunately starkly current.” In a statement released on 28 November 2016, the Holy Father said: “In the conviction that the protection of cultural treasures constitutes an essential dimension in the defense of what it is to be human, I hope that this event marks a new step in the process of the implementation of human rights”.