‘Cultural values, diversity and heritage: pillars of sustainable tourism for development’ was the key theme of the 10th International Conference for Cultural Tourism in Europe, which brought together professionals and stakeholders from the fields of tourism and heritage in the former European Capital of Culture, Sibiu, in Romania, on 20-21 September. As one of the speakers, Europa Nostra Vice-President Piet Jaspaert talked about the ‘European Heritage Alliance 3.3, Europa Nostra and the European Cultural Tourism Network (ECTN): thriving forces behind the European Year of Cultural Heritage 2018’. The conference was organised by ECTN – a member of Europa Nostra and the Alliance – in the framework of the European Heritage Days and the 2017 International Year of Sustainable Tourism for Development and in conjunction with the Interreg Europe project, CHRISTA. 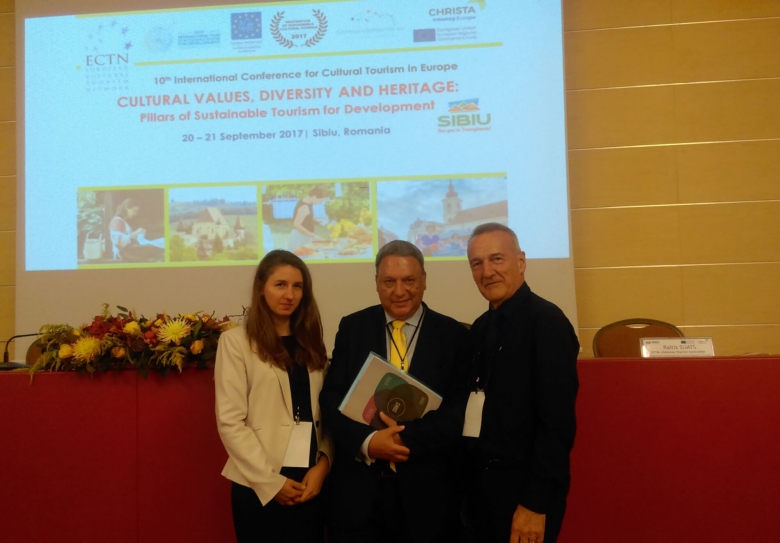 Europa Nostra’s Vice-President Piet Jaspaert gave an overview of how successful cooperation and joint lobbying efforts of members of the European Heritage Alliance 3.3 had contributed to the decision to hold the European Year of Cultural Heritage 2018. As longstanding moderator of the Alliance meetings, Piet Jaspaert, who also represented the Alliance during the conference, drew the audience’s attention in particular to the joint letter sent to the 28 EU Heads of State and government in December 2016, in which the Alliance called for adequate funding for the European Year.

On this occasion, the Vice-President of Europa Nostra also presented the recently launched Romanian translation of the Executive Summary of the report, ‘Cultural Heritage Counts for Europe’. Demonstrating the multiple benefits of heritage for Europe’s economy, society, culture and environment, this comprehensive report has been widely recognised as a key study on the impact of cultural heritage, most recently in the European Commission’s proposal to organise a European Year of Cultural Heritage in 2018. Several of the report’s key findings are directly linked to tourism, highlighting that cultural heritage is a key component of the attractiveness of Europe’s regions, cities, towns and rural areas.

With regard to the upcoming European Year of Cultural Heritage 2018, Piet Jaspaert took the opportunity to outline some of Europa Nostra’s flagship initiatives for next year, such as the European Cultural Heritage Summit taking place from 18-24 June in Berlin and the Special Editions of the EU Prize for Cultural Heritage / Europa Nostra Awards and the 7 Most Endangered programme. What is more, Europa Nostra is already closely cooperating with the European Heritage Days run by the Council of Europe, so as to strengthen synergies between the Awards scheme and the annual, Europe-wide celebration of heritage.

Besides Europa Nostra, three more members of the European Heritage Alliance 3.3 were among the speakers. Iulia Niculica, Operations and Administration Manager from the European Travel Commission (ETC), presented the results of recent research on incoming tourists and the initiative ‘Tasting Europe’. Manos Vougioukas, Secretary General of ECTN, gave insights into the ongoing Interreg Europe project, CHRISTA (Culture and Heritage for Responsible, Innovative and Sustainable Tourism Actions). He also pleaded for a more proactive and convincing connection with the ‘smart’ world with a view to the first ‘European Capital of Smart Tourism’ that will be launched by the European Commission. In his keynote speech, Thorsten Ludwig, Managing Director of Interpret Europe (European Association for Heritage Interpretation), stressed that cultural heritage is more than historical facts and data. The experience of cultural heritage and the understanding of its meaning often leads to participation and stewardship.

As Member of the European Committee of the Regions and rapporteur on ‘Age-friendly Tourism’, Annemiek Jetten highlighted the potential of seniors’ tourism in her plea for tourism for all ages. Afterwards, a series of case-studies, best practices and trends related to the conference theme were presented.

The ECTN ‘Destination of Sustainable Cultural Tourism 2017’ Award was given to laureates from Romania, Portugal and Croatia. Europa Nostra’s Vice-President handed over the Award to the second winner: House of Memory (Casa da Memória), Guimarães, Portugal.