On 6 November, Europa Nostra’s Secretary General Sneška Quaedvlieg-Mihailović, moderated the Conference “Enhancing sustainable entrepreneurship for private heritage houses”, which was held at the European Committee of the Regions in Brussels and organised by the European Historic Houses (EHH) in the framework of the European Year of Cultural Heritage (EYCH) 2018. She called on the participants “to build bridges and move mountains” and stressed the importance of private owners to cultural heritage in Europe and beyond. 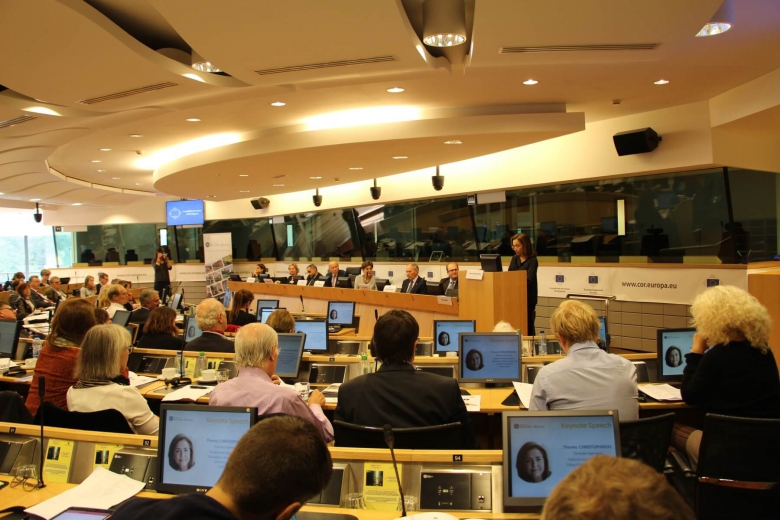 Uno Silberg, member of the European Alliance Group, welcomed the participants on behalf of the Committee of the Regions but also in his capacity as Chairman of Kose Rural Municipality Council in Estonia and owner of the Ravila Manor.

Themis Christophidou, Director-General of DG Education and Culture at the European Commission, was the keynote speaker of the Conference. She congratulated the European Historic Houses Association for its active involvement in the Year as member of the EYCH’s Stakeholders Committee and member of the European Heritage Alliance 3.3. She also congratulated the organisation for the European project ‘Heritage Houses for Europe. Exchange & Innovate’ launched in July 2018 and funded by the European Union. The project – run by EHH, the European Landowners’ Organization and IDEA Consult – will demonstrate the contribution of family-owned heritage houses to Europe’s economy, culture, tourism and environment, and will build synergies and increase collaboration with family-owned heritage houses.

The Conference was composed of two panels:

– the first panel, ‘Contribution of European heritage houses to EU attractiveness’, was introduced by Tom Jones, member of the European Economic and Social Committee and rapporteur of the own-initiative “Contribution of Europe’s rural areas to the 2018 Year of Cultural Heritage ensuring sustainability and urban/rural cohesion”, and gathered William Cartwright-Hignett, new EHH Vice-President and coordinator of the EHH Next Generation Group, Eduardo Santander, Executive Director of the European Travel Commission, and Csilla Hegedüs, President of the Transylvania Trust in Romania.

– the second panel, ‘Development of new innovative business models to sustain heritage houses’, was introduced by Patrick Klein and Girma Anuskeviciute from the DG GROW-Internal Market, Industry, Entrepreneurship and SMEs at the European Commission, and gathered Bastien Goullard, Founder of the heritage crowdfunding platform Dartagnans, and Madina Benvenuti, Founder of Mad’in Europe, which offers sustainable and concrete support to Europe’s community of craft practitioners..

The Conference ended with a special video message from Stéphane Bern, journalist, founder of the Fondation Stéphane Bern pour l’Histoire et le Patrimoine, and winner of an EU Prize for Cultural Heritage / Europa Nostra Award 2018 in the Dedicated Service category.

On the evening of 5 November, friends of the EHH and its members gathered for a Gala Dinner in the historic setting of the privately-owned Château de Grand-Bigard near Brussels during which tribute was paid to Rodolphe de Looz-Corswarem, who stepped down from the position of EHH Executive President after 8 years of dedicated service. Sneška Quaedvlieg-Mihailović stressed “his formidable and generous leadership, as well as his passionate and strong convictions for unity and cooperation among the wider field of cultural heritage, which have contributed to the development of the European Heritage Alliance 3.3 and to the implementation of the European Year of Cultural Heritage 2018”. Rodolphe de Looz-Corswarem was unanimously appointed as Honorary President of EHH. He has also been a member of the Board of Europa Nostra since May 2018.

In the same afternoon, the members of EHH appointed Alfonso Pallavicini as their new Executive President, and Wenceslas de Lobkowicz and William Cartwright-Hignett as Vice-Presidents of the European Historic Houses Association.

For more information on the Conference: see here

IEHC visit to the Menier Chocolate Factory at Noisiel