In the first months of 2021, Europa Nostra convened a series of meetings with high-level EU leaders to take stock on the latest policy developments and key priorities of the European Union. On 3 March, Europa Nostra met virtually, for the very first time, the European Commission Vice-President and Commissioner for Democracy and Demography Dubravka Šuica. The representatives from Europa Nostra introduced our work and mission, and expressed our keen readiness to mobilise the cultural heritage world and civil society organisations all across Europe in the shaping of the upcoming Conference on the Future of Europe, for which Vice-President Šuica is responsible. This meeting was also an advocacy effort with a view to duly mainstream cultural heritage in key policy issues within the portfolio of the Vice-President, such as the long-term vision for rural areas. 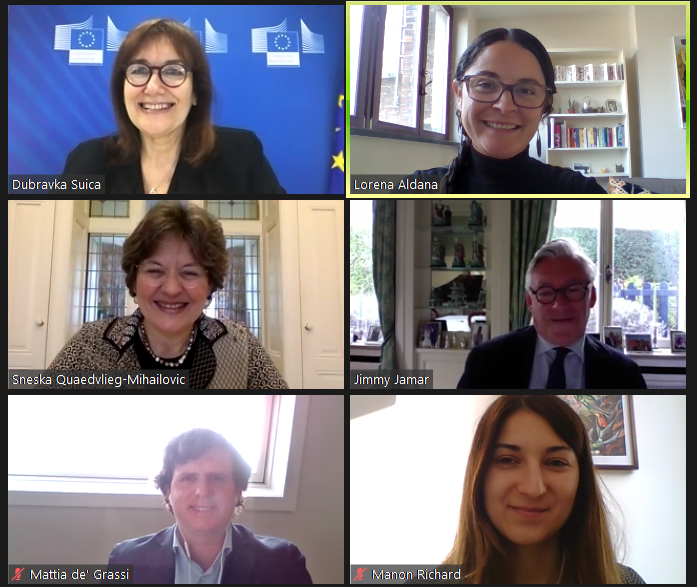 A delegation of Europa Nostra – composed of its Secretary General Sneška Quaedvlieg-Mihailovic, the Head of its Brussels Office Jimmy Jammar, European Policy Coordinator Lorena Aldana and European Projects Officer Manon Richard – met Vice-President Dubravka Šuica virtually on 3 March. During a lively and constructive meeting, Europa Nostra representatives and the European Commission Vice-President exchanged on the contribution of cultural heritage and civil society to the upcoming Conference on the Future of Europe, which was announced by the President of the European Commission Ursula von der Leyen in her Political Guidelines with the aim of giving Europeans a greater say on the direction and future of the EU.

Europa Nostra expressed its keen readiness to proactively contribute to the Conference on the Future of Europe by mobilising its expertise, knowledge and wide network. In particular, Europa Nostra stressed the relevance of cultural heritage for the success of the Conference, as it can provide a new narrative to the European project, giving it a much-needed soul and spirit that speaks precisely not only to the mind but also to the heart of people. Europa Nostra shared with Vice-President Šuica some of the concrete actions that we foresee as a contribution to the Conference, including collecting proposals and new ideas among our large network; encouraging our wide network of heritage sites (e.g. museums, opera houses, historic buildings and archaeological sites) and the sites that received a European Heritage Label to host grassroot dialogues with citizens on the Future of Europe; and duly engaging civil society organisations all across Europe in the debates.

There was an agreement that the Conference on the Future of Europe should be a bottom- up exercise, driven by citizens and civil society, and should particularly involve those who do not usually participate in EU actions, specially youth and elderly. The delegation of Europa Nostra reaffirmed its commitment to support the EU institutions to make the Conference as inclusive, open and creative as possible.

Other topics discussed were the role and potential of cultural heritage for the different policy priorities under the portfolio of Vice-President Šuica, namely the long-term vision for rural areas, which will tackle issues such as improving the attractiveness and halting the depopulation in Europe’s rural areas. The delegation of Europa Nostra raised the need to revitalise rural areas, make them more attractive, beautiful and sustainable through heritage-led investments. As demonstrated by the now landmark study Cultural Heritage Counts for Europe coordinated by Europa Nostra, cultural heritage can play a key role in urban and rural regeneration, impacting not only the physical aspects of a place, but also their social renewal. In the rural context, the value of cultural heritage is both economic – in terms of tourism and job creation, production of high-quality local food and increasing attractiveness – but also non-monetary, with its potential to improve quality of life, foster social cohesion and foster a sense of belonging which can contribute to stop depopulation.

Europa Nostra is preparing a Concept Paper outlining its contribution to the Conference on the Future of Europe, and will convey it to Vice-President Šuica as soon as ready as a follow-up to this meeting. In the meantime, on 10 March, the President of the European Parliament David Sassoli, the Prime Minister of Portugal António Costa, on behalf of the Council, and the European Commission President Ursula von der Leyen signed the Joint Declaration on the Conference on the Future of Europe: “Engaging with citizens for democracy – Building a more resilient Europe”. This Joint Declaration paves the way to launching a series of debates and discussions that will enable people from every corner of Europe to share their ideas to help shape Europe’s future.

Europa Nostra is fully committed to align its activities to the values and goals of this important and much awaited initiative.