Following the start of the content partnership between the Delphi Economic Forum (DEF) and Europa Nostra during this year’s edition of DEF held last April in Delphi (Greece), during which Europa Nostra contributed to 4 heritage-related events addressing timely issues, such as the protection of cultural heritage, sustainability, climate change and the future of Europe, Europa Nostra was invited to contribute to two high-profile events organised by DEF, one in Brussels and the other one in Belgrade.

Ahead of #COP27, our SG @SneskaEN with EU Commissioner @VSinkevicius & @GKremlis talked in Brussels on the vital bridge between #EUGreenDeal, #BlueEconomy, #SDGs & #CulturalHeritage.
Heritage is threatened by climate change but is also an asset for effective #ClimateAction! pic.twitter.com/Ld1ob9siLD

On 25 October, the Secretary General of Europa Nostra, Sneška Quaedvlieg-Mihailović, and the Head of the Europa Nostra Brussels Office, Jimmy Jamar, took part in the 1st East Med & Southeast Europe Conference in Brussels, organised by the Delphi Economic Forum.The conference addressed some of the key political, economic and foreign policy challenges that East Med & Southeast Europe are facing today. The  main topics discussed were  the war in Ukraine, the energy security dilemmas, the geopolitical shifts in Western Balkans, the major infrastructural projects in the area, as well as issues relating to competition and shipping.

This high-level event was introduced by Symeon G. Tsomokos, Founder and President of Delphi Economic Forum, an independent and impartial non-profit organisation committed to deliver and promote innovative ideas for sustainable and competitive growth for Southeast Europe, Margaritis Schinas, Vice-President of the European Commission in charge of Promoting our European Way of Life, and Ioannis Vraias, Permanent Representative of Greece to the European Union.

Together with Virginijus Sinkevičius, European Commissioner for Environment, Ocean and Fisheries, the Secretary General of Europa Nostra took part in the panel discussion “Blue Economy as an economic driver and protector of bio-diversity and cultural heritage,” chaired by George Kremlis, Principal Advisor for Energy, Climate, Environment & Circular Economy to the Greek Prime Minister.

Ahead of the COP27,  EU Commissioner Virginijus Sinkevičius, Europa Nostra’s Secretary General Sneška Quaedvlieg-Mihailović and George Kremilis spoke about the vital bridge between the European Green Deal, the Blue Economy, the Sustainable Development Goals and Cultural Heritage. The Secretary General of Europa Nostra stressed that heritage is threatened by climate change but is also an asset for effective climate action as demonstrated by the pioneering European Cultural Heritage Green Paper “Putting Europe’s shared heritage at the heart of the European Green Deal”, produced by Europa Nostra in cooperation with ICOMOS and the Climate Heritage Network, with the input of members of the European Heritage Alliance and with the support of the European Investment Bank Institute. 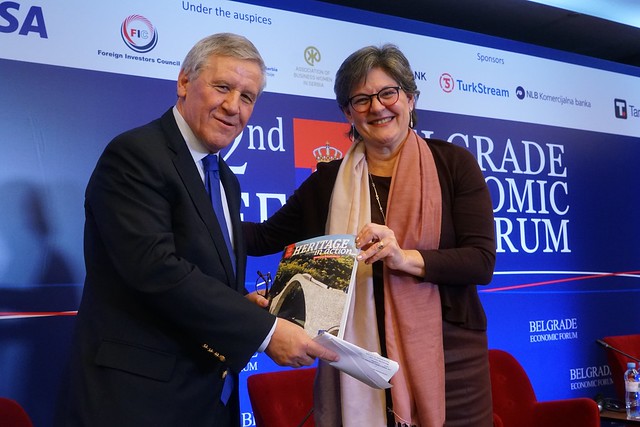 More recently, the Secretary General of Europa Nostra contributed to the 22nd Belgrade Economic Forum held on 5-6 December in the capital of Serbia. The Forum brought together over 70 Serbian and international experts in their respective fields, who discussed key political and economic issues, as well as representatives of the Government of Serbia, diplomatic corps, academia, businesses and the media. Sneška Quaedvlieg-Mihailovic was proud to be the first civil society representative from the wider field of culture and cultural heritage to be invited to address the Belgrade Economic Forum.

Among the topics discussed during the first day of the forum included the war in Ukraine and its impact on the region of Southeast Europe; unlocking the accession of Western Balkans in the European Union: what can we expect from the Tirana Summit, women’s economic empowerment in practice and connectivity in the Balkans.

The Secretary General of Europa Nostra took part in a “fireside chat” conversation with Symeon G. Tsokomos revolving around the power of culture and cultural heritage and its impact on Serbia’s economy, culture, society and the environment. She raised awareness on the important contribution of cultural heritage to all current key challenges of our societies – from sustainable development and climate action to the digital transformation, and from social cohesion to developing rewarding skills and creating quality jobs. Sneška Quaedvlieg-Mihailovic was proud to be the first civil society representative from the culture and cultural heritage sector to be invited to the Belgrade Economic Forum.

Europa Nostra looks forward to further strengthening its partnership with DEF, during and after next year’s edition of the Delphi Economic Forum which will take  place in Greece on 24-28 April 2023.