Watch the recordings of all 4 events:
1) The Spirit of the Place: Preserving the cultural and natural landscape of the world heritage site of Delphi – In memory of Costas Carras
2) Climate Change impacts on cultural and natural heritage
3) In Conversation: Promoting a value-based Europe
4) Overtourism and the struggle for sustainable tourism

From 6-9 April 2022, Europa Nostra participated as a content partner in the 7th edition of the Delphi Economic Forum (DEF), organised in the World Heritage Site of Delphi, Greece. During this year’s annual conference, Europa Nostra contributed to 4 heritage-related events addressing timely issues, such as the protection of cultural heritage, sustainability, climate change and the future of Europe. Our Secretary General Sneška Quaedvlieg-Mihailovic, shared the floor with prominent speakers, among others the Vice-President of the European Commission Margaritis Schinas. On this occasion, our delegation also had the opportunity to meet and exchange in Delphi with leading political and economic figures of the European and global scene.

Running under the patronage of H.E. The President of the Hellenic Republic, the Delphi Economic Forum aims at sparking dialogue, inspiring change and transforming conversation into action. Among this year’s top speakers from across sectors were representatives of EU bodies, global government leaders, forefornters from the world of banking and finance, tech influencers, renowned journalists and people from the worlds of arts and culture.

Europa Nostra contributed to 3 of these pillars by organising two and taking part in two additional heritage-related events. More specifically:

The Spirit of the Place: Preserving the cultural and natural landscape of the world heritage site of Delphi – In memory of Costas Carras 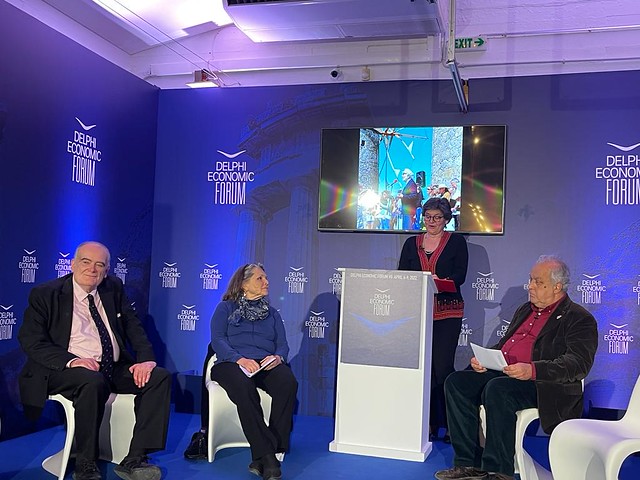 This event was organised by Europa Nostra in collaboration with ELLINIKI ETAIRIA – Society for the Environment and Cultural Heritage (ELLET), Europa Nostra’s Country Representation in Greece. The nearby Archaeological Site of Delphi, inscribed by UNESCO in the World Heritage List in 1987, was the backdrop of the discussion about the spirit of the place and the importance of taking it into account for the preservation and valorisation of a heritage site.

In antiquity, Delphi was a place with great symbolism, considered as the centre of the then-known world that also became the location of the most important pan-Hellenic religious sanctuary. The unique spirituality of this place with its surrounding landscape was highlighted by all the panellists that contributed to this discussion, namely Lydia Carras, President of Elliniki Etairia and Council member of Europa Nostra; Paul Kalligas, Director of the European Cultural Centre of Delphi, Professor of Ancient Philosophy at the National and Kapodistrian University of Athens; and Bruce Clark, Journalist at The Economist.

Acting as moderator, the Secretary General of Europa Nostra, Sneška Quaedvlieg-Mihailović, dedicated the event to the memory of Costa Carras, a committed European and leading figure of both ELLET and Europa Nostra, who devoted more than 50 years of his life to the protection of cultural and natural heritage in Greece and Europe.

The work of ELLET related to Delphi, was presented by Lydia Carras, President of Elliniki Etairia and Council member of Europa Nostra, who recalled the serious threats posed in the past to the authenticity and integrity of the World Heritage Site of Delphi and the Delphic Landscape. Thanks to the campaigns led by ELLET, with the support of Europa Nostra, these threats were eliminated. Today, there are new potential threats – from the construction of large wind farms and intensive aquaculture sites, to provisions allowing the operation of several mining sites. Therefore, Lydia Carras reiterated ELLET’s commitment to continue its efforts for the preservation of Delphi’s exceptional cultural and natural landscape, including the current work of creating a “Path of Culture” in this area. With the support of Europa Nostra and other local and European partners, we can collectively ensure that this unique landscape is preserved for present and future generations.

With his years of experience as the Director of the European Cultural Centre of Delphi, Paul Kalligas, highlighted the site “as a major spiritual place” that in the past was the centre of the pan-Hellenic union and which today attracts people from all over the world. Speaking about its landscape, he stressed that the best way to appreciate its unique beauty is to arrive in Delphi from the sea, something that can be promoted by the future Path of Culture to be created and promoted by Elliniki Etairia. Bruce Clark, Journalist at The Economist, recalled the fact that the site has never been compromised by warfare by saying “this place transcends everything”.

Closing the event, Sneška Quaedvlieg-Mihailović, Secretary General of Europa Nostra, called “all relevant stakeholders to ensure the highest level of protection of the World heritage Site of Delphi and its the surrounding Delphic landscape to preserve the ‘Spirit of the Place’ of this valuable heritage for Greece, but also for Europe and for Humanity as a whole.” 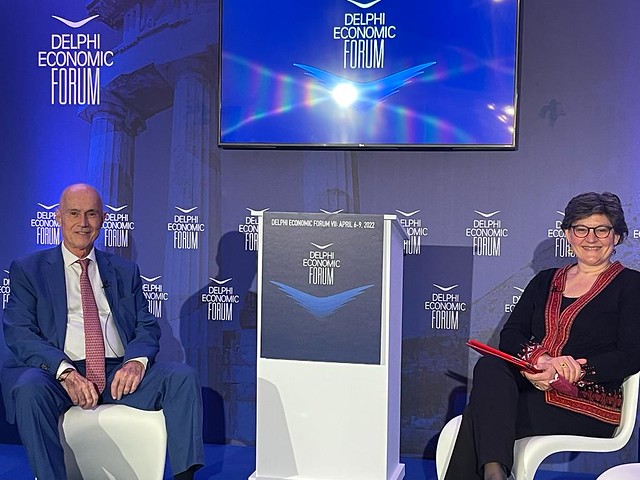 This short pop-up debate between George Kremlis, Principal Advisor to the Greek Prime Minister, for Energy, Climate, Environment and Circular Economy, and the Secretary General of Europa Nostra, Sneška Quaedvlieg–Mihailović, focused on the need for sustainable strategies for the protection of the world’s cultural and natural heritage, against the negative effects of climate change.

In her remarks, Sneška Quaedvlieg–Mihailović, Secretary General of Europa Nostra, applauded the political commitment of the Greek Government to be a “Green European Leader”, recalling her last previous encounter with George Kremlis, when the two of them virtually shared the stage at the COP26 event “Addressing climate change impacts on cultural and natural heritage: The Way Forward”, organised by the Greek Government.

Sneška Quaedvlieg–Mihailović, presented the work of Europa Nostra to raise awareness of the negative effects of climate change to our natural and cultural ecosystem, as well as to recognise cultural heritage as a key asset and resource for climate action. In 2021 alone, Europa Nostra published the groundbreaking European Cultural Heritage Green Paper, produced by Europa Nostra, ICOMOS and the Climate Heritage Network with the support of the European Investment Bank; became the new Regional Co-Chair of the Climate Heritage Network for Europe and the Commonwealth of Independent States; and contributed to four heritage-related events in the frame of COP26.

The two speakers also introduced as examples of World Heritage Sites greatly endangered by climate change Venice and the Greek island of Delos. Europa Nostra also provided examples of sites that are endangered by insensitive developments to combat climate change, like the Five Southern Aegean Islands, listed among the 7 Most Endangered heritage sites in Europe for 2021.

Europa Nostra stands ready to be a forceful advocate of the heritage-for-climate movement and act as a “bridge-builder” to achieve this ambition, in close collaboration with the Greek Government and the European Union.

Watch the recording of the event.

In Conversation: Promoting a value-based Europe 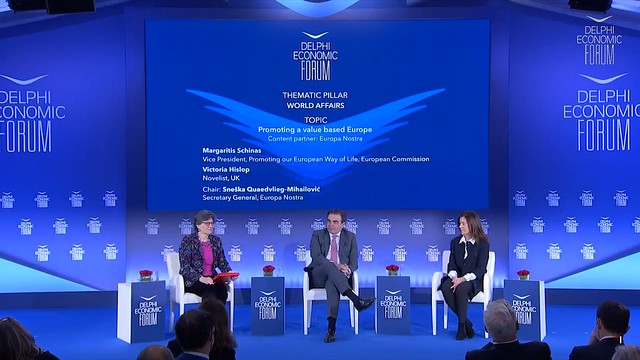 During this event organised by Europa Nostra, its Secretary General, Sneška Quaedvlieg-Mihailović, engaged in a conversation with the Vice-President of the European Commission in charge of Promoting our European Way of Life, Margaritis Schinas, and with renowned journalist and author of bestselling novels on history, heritage and the spirit of a place, with a particular affection for Greece, Victoria Hislop. This conversation took place in the frame of the Call for citizens’ debates on the future of Europe in heritage sites launched by Europa Nostra as a contribution to the Conference on the Future of Europe.

In her opening remarks, Sneška Quaedvlieg-Mihailović, acting as the moderator of the event, referred to the increasingly threatening emergencies that Europe is facing today: not only climate emergency and sanitary emergency but also democracy emergency and most recently peace emergency due to the war in Ukraine. For all these reasons, there is an urgent need to put a stronger emphasis on values that form the basis of the European project.

Protecting and empowering European citizens are “the basic components of our way of life, which in these difficult times can become a shield for an autonomous, resilient and independent Europe,” said Vice-President Margaritis Schinas, commenting on the two main pillars of his anthropocentric agenda and added that “The EU way of life is not a slogan. It is a substantial element of an EU that acts and not of one that analyses,” as proved by what the EU has achieved in the past two and a half years.

Speaking as a European citizen with two nationalities (British and Greek), Victoria Hislop highlighted this shared feeling of being a big European family, following the many challenges we faced together the last years, regardless of Brexit. She also addressed language learning as a vital component in our education systems to empower young people to fully enjoy this way of life.

Building on the discussion, Vice-President Margaritis Schinas reminded that the Europe of values was born from another crisis, the ashes of World War II, and that we might not yet realise it but Europe all the more becomes the epicentre of good governance, democracy and values. Reacting to this statement, Victoria Hislop from her experience as a book writer shared her views on overcoming human tragedies and traumas and noted the role of books, which are addressing such episodes of our shared history, as a medium to heal wounds and rebuild bridges between the communities affected.

Concluding the event, Vice-President Margaritis Schinas reflected on the war in Ukraine and said “This is a war that we have won already. The war of democracy and freedom versus autocracy has already been won and we are on the side of the winners.”

Overtourism and the struggle for sustainable tourism 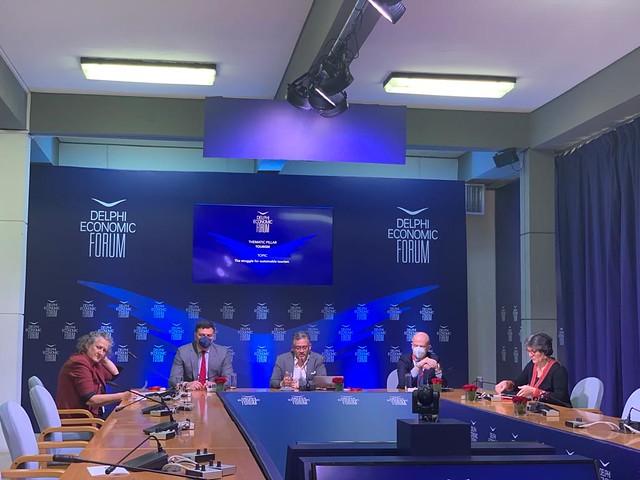 This event, organised by ELLINIKI ETAIRIA – Society for the Environment and Cultural Heritage (ELLET), focused on the negative effects of mass tourism and the need for sustainable solutions to this global challenge, also visible in Greece.

Europa Nostra’s Secretary General Sneška Quaedvlieg-Mihailović was one of the panellists of the discussion together with other prominent speakers, namely Vasilis Kikilias, Minister of Tourism of Greece; Yiannis Retsos, President of the Greek Tourism Confederation; and Maro Evangelidou, Chairwoman of the Council for Institutional Framework (STHEP) speaking as representative of ELLET. The event was chaired by Michael G. Jacobides, Professor at London Business School.

In his remarks, Yiannis Retsos, President of Greek Tourism Confederation, representing the private sector, highlighted the need for investment in public infrastructure to support the local communities and businesses overaffected by tourists. On his turn, the Greek Minister of Tourism, Vasilis Kikilias, reaffirmed the commitment of the Greek government to work hand in hand with all stakeholders and highlighted the government’s aim for ‘quality tourism’ to achieve a sustainable tourism model for Greece.

Representing the world of civil society, Maro Evangelidou put emphasis on the need “to find the right balance between investments in infrastructure and respect for the finite of natural resources” for a sustainable solution to overtourism. Sneška Quaedvlieg-Mihailović on the other hand argued for a strategy to enhance quality cultural tourism. Recalling the Barcelona Declaration “Better places to live, Better places to visit”, she stressed that in order to champion responsible, sustainable and quality tourism, we must work with local communities, ensuring due respect to the cultural and natural environment. 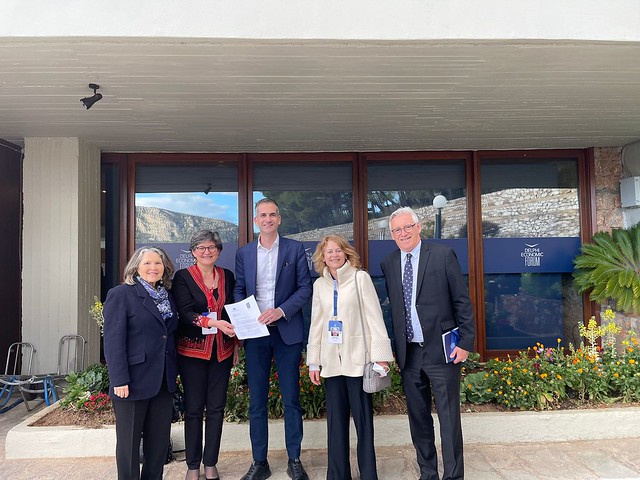 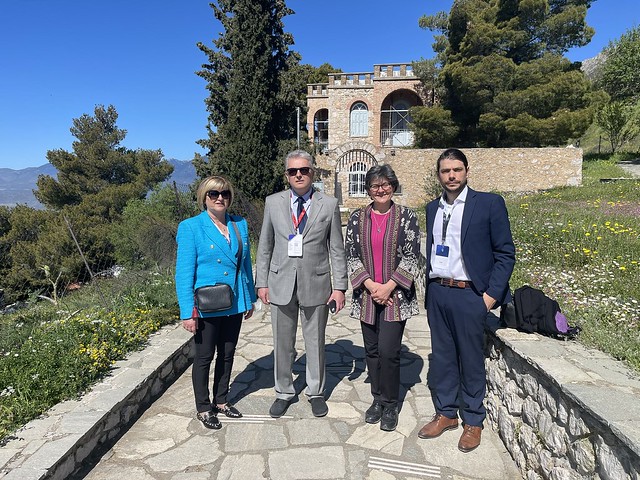 Upon recommendation of our partner organisation, World Human Forum, Europa Nostra’s Secretary General, Sneška Quaedvlieg-Mihailovic, also paid a special visit to the Delphic Festivals Museum where she was greeted by the Mayor of Delphi Panagiotis Tagkalis. The museum is located in the historic Villa built 100 years ago by Angelos & Eva Sikelianos, Member of the newly created Network of Houses & Museums of European Musicians, of which Europa Nostra is the main European partner. 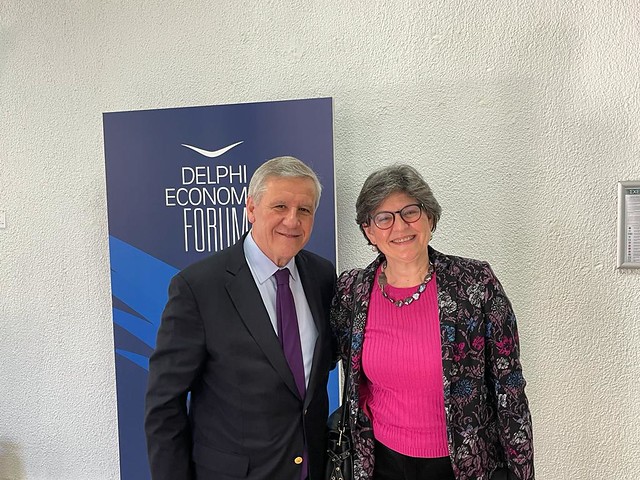 Europa Nostra is looking forward to its participation in the next Delphi Economic Forum to be held on 26-28 April 2023, as the main content partner from the world of culture and cultural heritage. This event will coincide with the 60th anniversary of Europa Nostra.