Maestro Plácido Domingo, President of Europa Nostra, calls on citizens from all over Europe and beyond to contribute to the #Ode2Joy Challenge. This new participatory initiative, which was launched by Europa Nostra on the occasion of the European Year of Cultural Heritage 2018, celebrates Europe and our shared cultural heritage.

“Let yourself be inspired by the Ode to Joy composed by Ludwig van Beethoven. As you know, this famous music has become a Symbol of Europe – the Anthem of Europe! Perform the original score or make your own version of the Ode to Joy. And if you cannot sing or play music… Dance, act, recite, take a photo, make a cartoon or a drawing, make your own Ode to Joy, your own Ode to Europe,” stated Maestro Plácido Domingo in his video message released on 31 January at the Belgian launch event of the European Year of Cultural Heritage 2018 in Brussels.

Jean-Claude Juncker, President of the European Commission, with a group of 10 European Commissioners, including Commissioner for Culture Tibor Navracsics, attended the opening event of the Year in Belgium upon the invitation of Philippe Close, Mayor of the City of Brussels. The event ended with an impressive 3D mapping show on the facade of the Town Hall located on the Grande-Place.

A selection of the most inspiring and creative contributions will be showcased during the European Cultural Heritage Summit in Berlin (18-24 June), in the presence of Maestro Plácido Domingo, and the highest representatives of the EU Institutions. 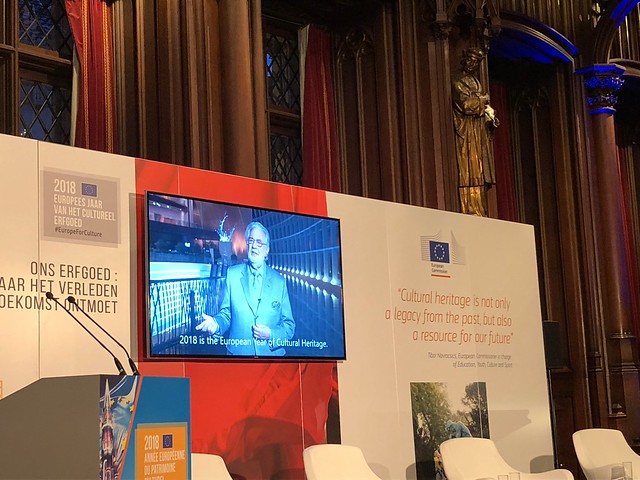 “Our “#Ode2Joy Challenge” seeks to make an “#Ode2Europe” as a humanistic and cultural project, based on shared values, history & heritage, and thus to promote a positive attitude and stronger engagement of citizens towards Europe. We feel encouraged by initial enthusiastic responses to the invitation by our President, Maestro Plácido Domingo, and are confident that many people will contribute to this creative European Challenge,” added Sneska Quaedvlieg-Mihailovic, Secretary General of Europa Nostra.

The kick-off event of the European Year of Cultural Heritage in Belgium with the related Citizens Dialogue, was organised by the EC Representation in Belgium in the historic Town Hall located on the Brussels Main Square. It brought together around 250 people and prominent representative from the EU Institutions and the Belgian government such as European Commissioner for Culture Tibor Navracsics, and the Walloon Minister for Agriculture, Nature, Rural Affairs, Tourism and Heritage René Collin.

Europa Nostra was represented by its Executive President, Denis de Kergorlay, Vice-President Piet Jaspaert, and Council members based in Belgium, namely Koen van Balen, Pierre Laconte, Olivier de Trazegnies and Juan Prat y Coll. A large number of our members (organisations or individuals) from Belgium were also present. Europa Nostra Secretary General Sneška Quaedvlieg-Mihailović was among the panelists at the dialogue, alongside Michel Magnier, EC Director for Culture and Creativity, and Paolo Fontani, Head of the UNESCO Office to the EU.

For more detailed instructions on how to participate in #Ode2Joy Challenge, please visit: www.ode2joy.eu