On 31 January, it was the turn of Belgium to kick off the European Year of Cultural Heritage (EYCH) with prominent events held at Brussels City Hall and in the Grand Place, both emblematic Belgian sites inscribed on the UNESCO World Heritage List. These events were organised by the European Commission Representation in Belgium in cooperation with the Federal Authorities, the City of Brussels, the Walloon Region, the Federation Wallonia-Brussels, the Flemish Authority, the Brussels-Capital Region and the German Community.

The afternoon commenced with a press conference, which was introduced by Jimmy Jamar, Head of the European Commission Representation in Belgium. In attendance were Belgium’s highest authorities in charge of culture and cultural heritage from the Brussels-Capital Region, Flanders, the Federation Wallonia-Brussels and the Walloon Region. 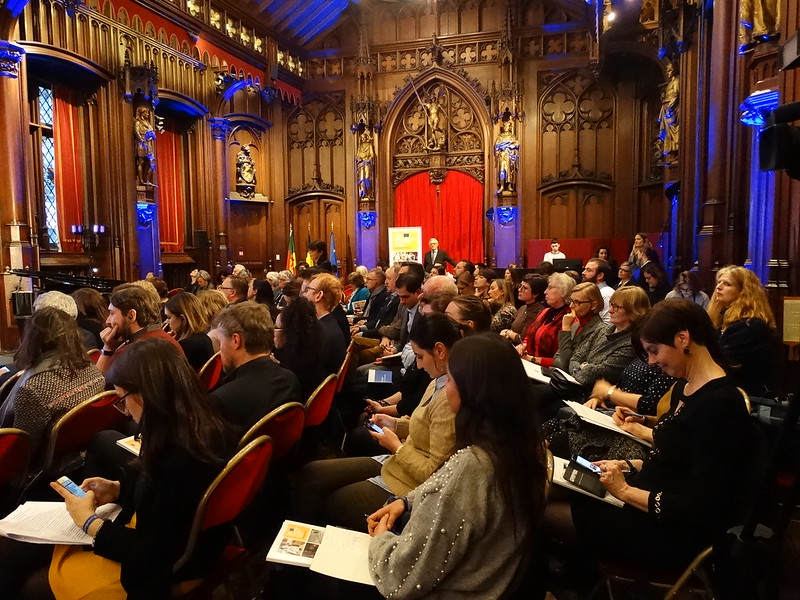 Around 250 participants – including representatives from the EU Institutions and the Belgian authorities – joined the Citizens Dialogue “Our Heritage: when the past meets the future”, which was introduced with a live interview of Paolo Fontani, Director of the UNESCO Brussels Liaison Office, lead by Catherine Magnant, Coordinator of the EYCH at the European Commission. Fontani stressed the crucial importance of cultural heritage which is “really the expression of how we became what we are and of what we will become in the future”.

After this inspirational talk, the citizens had the opportunity to raise their voices and ask questions to the four panelists participating in the Dialogue: Michel Magnier, Director for Culture and Creativity at the European Commission, Sneška Quaedvlieg-Mihailović, Secretary General of Europa Nostra, Jean-Louis Delaet, Director of the mining site Bois du Cazier – inscribed in 2012 on the World Heritage List and recently awarded with a European Heritage Label – and Guy Tilkin, Director of the Grand Commandery Alden Biesen. All panelists passionately highlighted the value of cultural heritage for Belgium and for Europe. Sneška Quaedvlieg-Mihailović also praised the current political momentum for cultural heritage which has to be placed at the centre of the debate on the future of Europe.

The European Commissioner for Culture Tibor Navracsics closed the Dialogue before the official launch of the Ode to Joy Challenge via a video message from Maestro Plácido Domingo, President of Europa Nostra, who called on citizens from Europe and beyond to contribute to this participatory initiative to celebrate Europe and our shared cultural heritage.

The afternoon ended with the impressive 3D mapping show ‘Thousands Reflections of Europe’ on the facade of the Town Hall in presence of Jean-Claude Juncker, President of the European Commission, who was accompanied by 10 European Commissioners, upon the invitation of Philippe Close, Mayor of the City of Brussels. This unprecedented visit by the President and the College of Commissioners reflected the excellent relations between the Commission and the City of Brussels.​