The European Union’s assembly of regional and local representatives discussed the role of regions and cities as “key drivers for reinforcing the European identity through culture” on 17 May in Brussels. The President of the European Committee of the Regions Karl-Heinz Lambertz opened the debate, which took place during the Committee’s plenary session, and made the link to the recently proposed future EU budget. “Investing more in soft power, including youth, education and culture, is a guarantee for more solidarity and the best antidote against the risk of disintegration of our common European identity. These priorities need to be reflected across the different programmes of the next EU budget,” he stated. 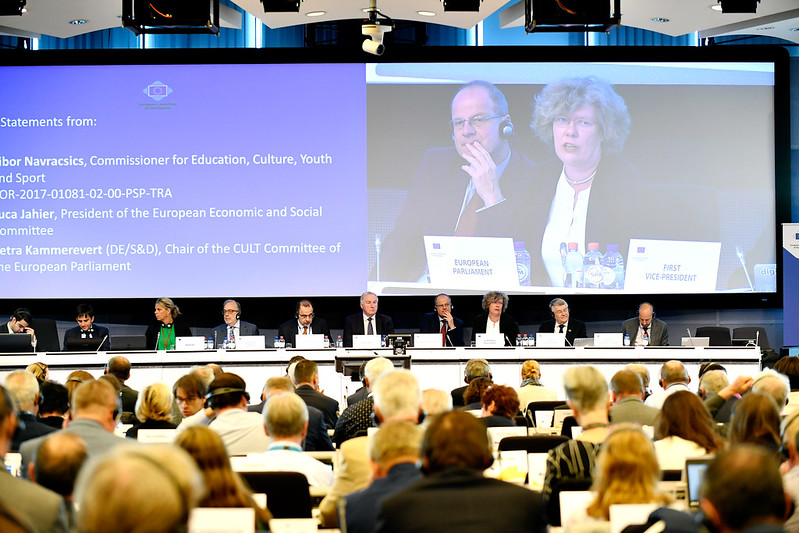 Tibor Navracsics outlined the policy framework in his speech. Next week, the Commissioner will propose a new European Agenda for Culture, thereby building on the momentum of the European Year of Cultural Heritage 2018 “to harness the power of culture to drive economic growth, job creation and social development”.

Culture is also one of the four priorities of Luca Jahier, President of the European Economic and Social Committee. He announced that the EESC would be issuing an opinion on the New European Agenda for Culture in 2018 as well as one on culture and rural environments, among others.

While considering the complexity of defining “culture” and “identity” in her address (in German), Petra Kammerevert voiced her conviction that culture needs to be included in any discourse about European identity – a simply political identity lacks the power and capability to spark passion and emotions which is so inherent to culture. The Chair of the Committee on Culture and Education of the European Parliament also drew the attention of the local and regional representatives to a study on European identity, which was requested by the European Parliament’s Committee on Culture and Education.

This debate set the floor for the adoption of two important policy documents: an opinion on ‘Strengthening European Identity through Education and Culture’ (to whose drafting process Europa Nostra contributed) and an opinion on ‘Cultural Heritage as a strategic resource for more cohesive and sustainable regions in the EU’. These opinions will feed into the work of the EU Culture Ministers who are expected to adopt Council conclusions on the need of bringing cultural heritage to the fore across policies in the EU during their meeting on 23 May in Brussels.