Home News Policy Debate: Cultural Heritage at the heart of the revival of the European project

Policy Debate: Cultural Heritage at the heart of the revival of the European project

One of the highlights of the European Cultural Heritage Summit 2019 in Paris was the European Policy Debate “Cultural Heritage at the Heart of the Revival of the European Project”, organised on October 30 as a co-production of Europa Nostra and the Collège des Bernardins and its research centre on Europe, in partnership with the Fondation du Patrimoine. For the five different sessions of the Policy Debate, participants gathered at the Collège des Bernardins, – just a few metres away from Notre-Dame Cathedral – to discuss the most pressing issues related to cultural heritage in Europe.

The exchanges provided useful insights on the role of cultural heritage for tackling some of the most pressing challenges which Europe and its citizens are facing, and reaffirmed the significance of shared heritage assets for the future of the European project. 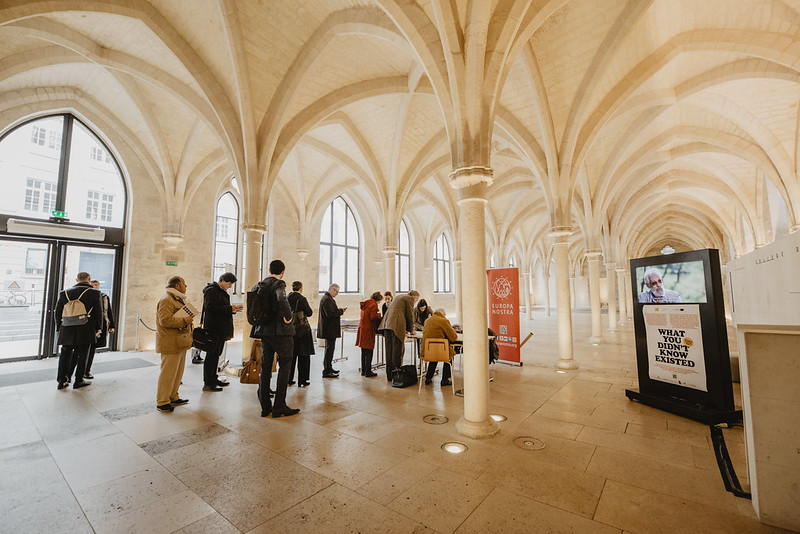 The opening session was moderated by Sneška Quaedvlieg-Mihailović in her capacity of Secretary General of Europa Nostra, one of the co-hosting organisations of the Debate. 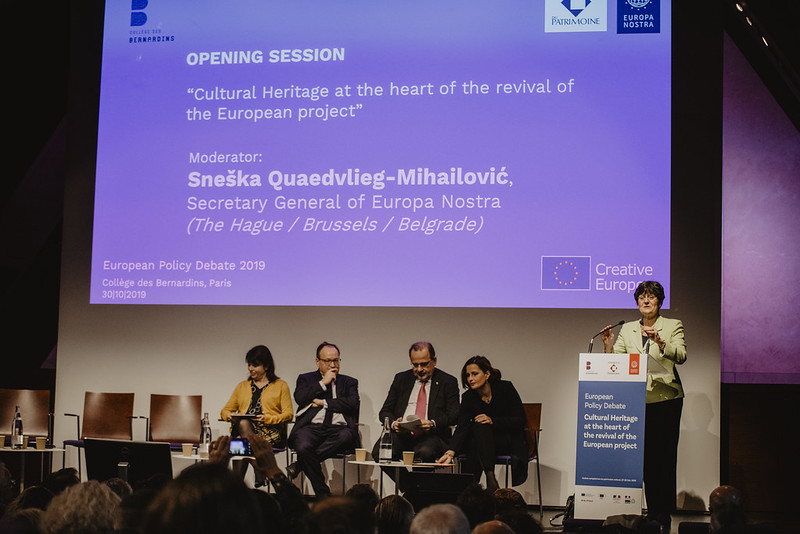 Participants were welcomed with a video-message by David Maria Sassoli, President of the European Parliament, who applauded the organisation of the Paris Summit as an occasion to honour and celebrate the richness of Europe’s cultural heritage, but also as a time for critical collective reflection. He stressed the need to focus on culture and cultural heritage as one of the best and most effective ways of approaching the debate on the future of Europe, as well as to reinforce our sense of belonging and European identity. Read the whole speech here.

The President of the European Economic and Social Committee (EESC), Luca Jahier, then took the floor to express his conviction on the key role of culture and cultural heritage in driving the European project. This is one of the reasons why he placed culture as one of the priorities of his Presidency at the EESC – alongside sustainable development and peace. He highlighted how culture and heritage can help overcome the current systemic, political and identity crisis in Europe and dare us to dream and create new perspectives. Read the full speech here. 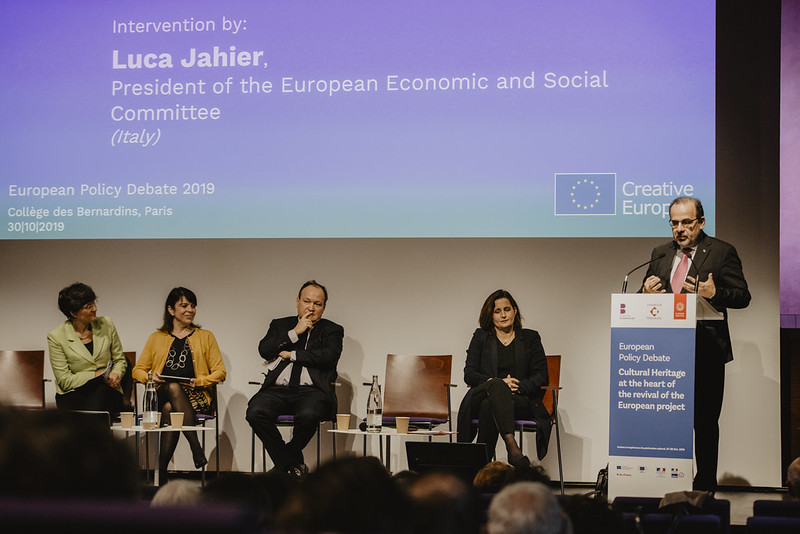 On behalf of the Director General for Education, Culture, Youth and Sport of the European Commission, Themis Christophidou, Catherine Magnant, Adviser for cultural heritage at the same Directorate, addressed the audience. She recalled the resounding success of the European Year of Cultural Heritage 2018 and addressed the work ahead to secure its legacy and further unlock the potential of cultural heritage to find new solutions to the many challenges we face today. A people-centred approach to cultural heritage, she said, is a stepping stone for a better Europe. Read full speech here. 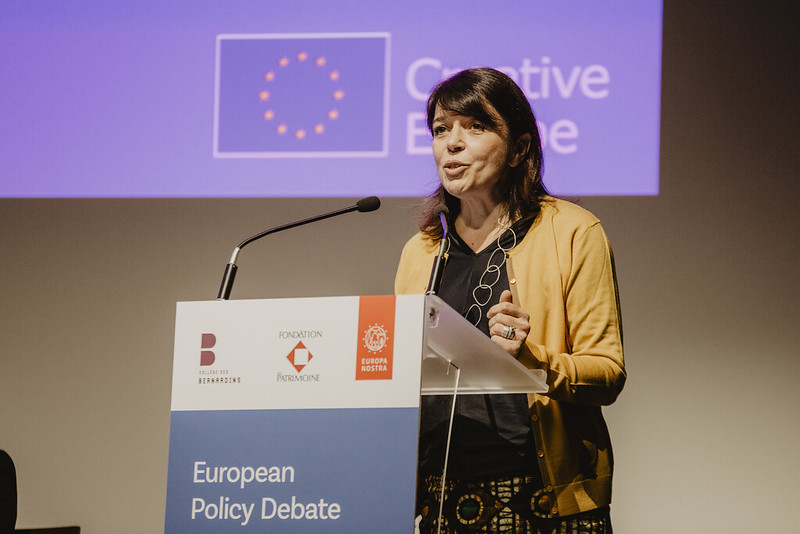 Representing the European Investment Bank (EIB), Vice-President Ambroise Fayolle conveyed the EIB’s commitment to invest in the future through cultural heritage, notably by doubling its support to the ‘7 Most Endangered’ programme led by Europa Nostra since 2013 with the aim of raising awareness on and saving Europe’s most fragile heritage gems. He recalled the mission of the EIB as one of financing projects that are in line with European political priorities and are capable of bringing European added value. Against this backdrop, the commitment to cultural heritage is ‘part of the EIB’s DNA’ he added. 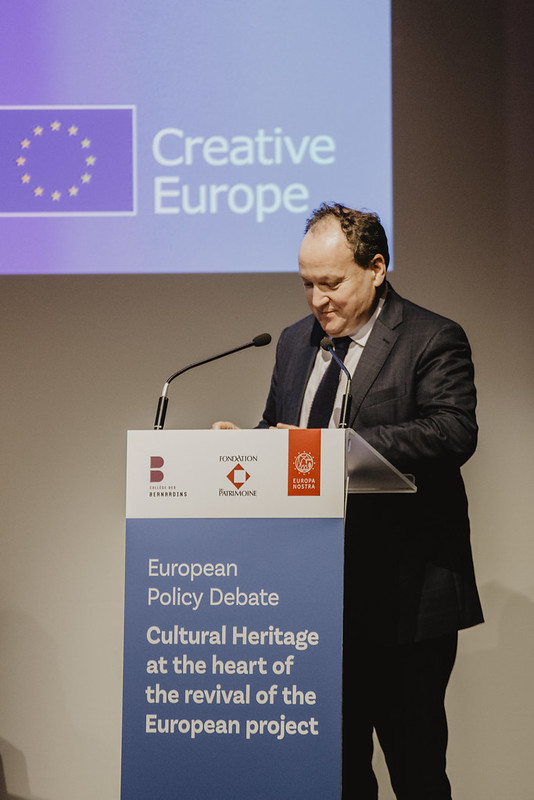 The Regional Councilor of Ile-de-France in charge of tourism and heritage, Aurélie Gros welcomed participants on behalf of the French regional authority. She recalled the deep planetary shock caused by the fire of the Notre Dame Cathedral last April, and how this dramatic episode gave a new impetus to the commitment by Ile-de-France regional authorities towards cultural heritage. This commitment was reflected, among others, by investing 10 million euros in the reconstruction of the Cathedral, as well as by the organisation of the very first Assises du Patrimoine en Île-de-France last September resulting in 15 concrete actions. 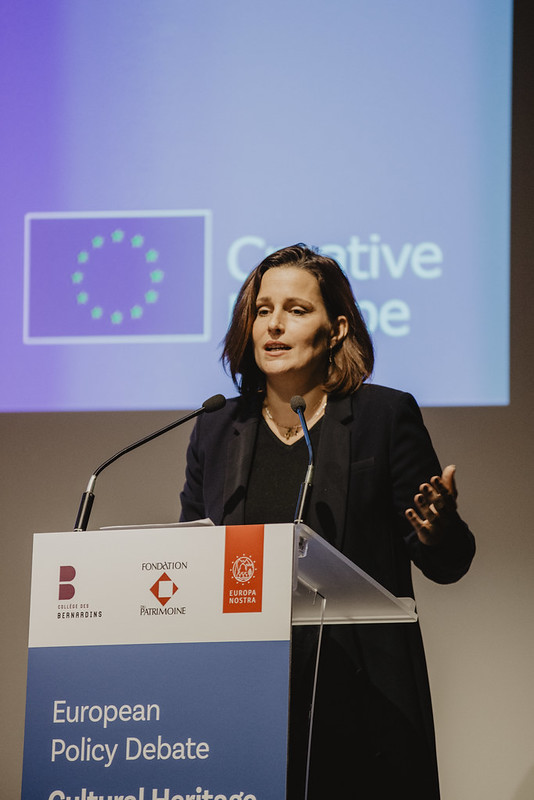