The European Year of Cultural Heritage 2018 requires a collective effort

On the occasion of 2016 denkmal trade fair, Europe’s leading trade fair for conservation, restoration and old building renovation, the European Heritage Alliance 3.3 gathered for its autumn plenary session in Leipzig, Germany, on 9 November 2016. This meeting, which was organised in conjunction with the Board and Council meetings of Europa Nostra (who acts as coordinator of the Alliance) and in the framework of its Network project ‘Mainstreaming Heritage’ supported by the EU Creative Europe programme, provided ample networking opportunities among participants.

The topic of discussion was the European Year of Cultural Heritage 2018 for which the European Commission had put forward a proposal on 30 August 2016. Alliance members presented how they and their networks prepare for the Year, identified topics of joint interests and agreed to send a joint letter to the Heads of State or Government of the European Union so as to call on all EU Member States to provide adequate funding and resources for the organisation and implementation of the European Year at all levels of governance.

Besides this concrete focus of the meeting, Alliance members also had the pleasure of welcoming Interpret Europe, the European Association for Heritage Interpretation, for the first time as observer to the meeting. Subsequently, the network decided to join the Alliance.

Strong appeal to participants at opening ceremony of Denkmal Fair: “Unite for Heritage!”
In her address at the opening ceremony of the Denkmal Fair, taking place on the same day in the evening, Sneška Quaedvlieg-Mihailović, Secretary General of Europa Nostra, made a strong appeal to all participants: “Let us Unite for Heritage! Let us promote and contribute to the European Year of Cultural Heritage in 2018 – with creativity and confidence, in the spirit of innovation and cooperation. Each of you can contribute. But together we can achieve so much more. We are certain that we can count on Denkmal Fair 2018 to be one of the European highlights of this European Year of European Heritage. Let us write together an important new chapter in the history of the European heritage movement, and in the history of the entire European project.” 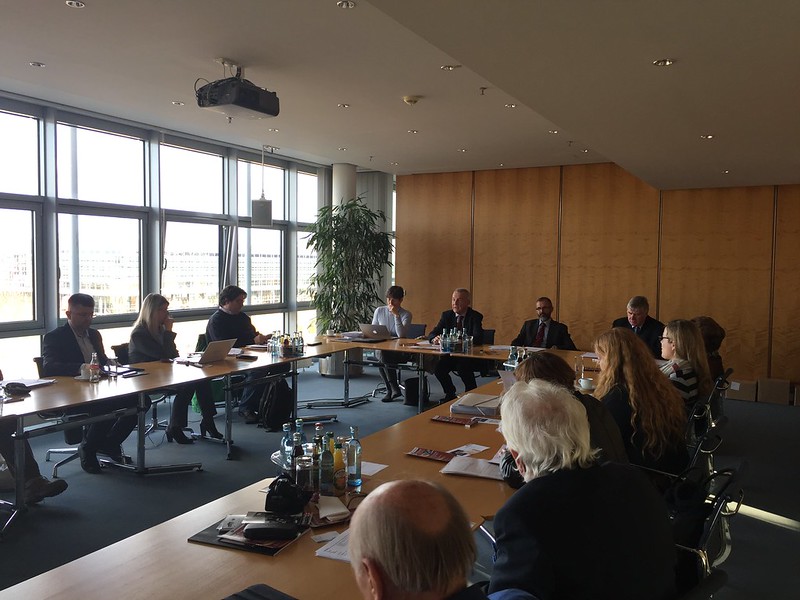 Public debate on the European Year of Cultural Heritage during Denkmal Fair
On 10 November 2016, Alliance members engaged in a public debate ‘Towards the European Year of Cultural Heritage 2018’. After a special welcome from Markus Geisenberger, CEO of Leipzig Trade Fair, Christoph Rauhut from German Cultural Heritage Committee (DNK), which is currently establishing a framework for the Year in Germany, emphasised that this European Year presents an opportunity where cooperating means “Sharing Heritage”. Recalling the collective effort of the heritage world at lobbying for such a European Year, Sneška Quaedvlieg-Mihailović, Secretary General of Europa Nostra, thanked DNK for their initiative and the excellent partnership, which is one of the reasons why Europa Nostra will organise its main event in Berlin in 2018 – the first ever European Heritage Summit.

In his introductory remarks, Michel Magnier, Director for Culture and Creativity at the European Commission, extended his thanks to Europa Nostra as a longstanding partner and one of the European networks supported by the EU. He highlighted the role of cultural heritage as a resource for an inclusive society, for economic growth and jobs and for cultural diplomacy. The European Year would be officially launched at the European Culture Forum taking place in Brussels in November 2017. Sneška Quaedvlieg-Mihailović, who moderated the debate, thanked Michel Magnier for the good cooperation and stressed that the real challenge for the heritage sector would be now to prepare for the upcoming year in a coordinated way.

Gustavo Araoz, President of the International Council on Monuments and Sites (ICOMOS), briefly outlined the initiatives planned for the Year and the positive experience with cultural heritage as a cohesive force, especially in Latin America. In time for the Year, ICOMOS will sign a Memorandum of Understanding with Europa Nostra for closer cooperation.

In her address to the audience as one of the Ambassadors for the European Year of Cultural Heritage 2018 in Germany, the President of Humboldt University Berlin, Sabine Kunst, reiterated that “our shared cultural heritage is always local and European” and that one of the main goals of the European Year should be to protect and promote it.

During the public debate, Rodolphe de Looz-Corswarem, President of the European Historic Houses Association, stressed the crucial support to the Year from Germany and reminded the audience of the important contribution of cultural heritage to creating employment in Europe which still lacks recognition. Androulla Vassiliou, Europa Nostra’s Vice-President and former European Commissioner for Culture, emphasised the need to regain trust for the European project, also through the European Year of Cultural Heritage.

Thanks to the support from DNK and Leipziger Messe, the German translation of the Executive Summary ‘Cultural Heritage Counts for Europe’ was also presented by Claire Giraud-Labalte in her capacity as ambassador member of ENCATC. The audience was pleased to learn from Goranka Horjan, President of the European Museum Forum, that the English original is part of the student curriculum of Zagreb University. Europa Nostra Council member Emilio Rui Vilar, former President of the Board of Trustees of the Calouste Gulbenkian Foundation, also acknowledged that the report was an excellent basis for public policies and for mobilising civil society, foundations and NGOs. He strongly recommended that the motto of the Year “Sharing Heritage” should be complemented with “Sharing Values”.

By way of closing the debate, Alexander Fürst zu Sayn-Wittgenstein-Sayn, Europa Nostra Vice-President and President of Europa Nostra Deutschland, thanked Leipziger Messe and denkmal for hosting both the European Heritage Alliance 3.3 and Europa Nostra during these days as it was indeed a privilege for members to be at denkmal fair and engage with so many heritage experts and enthusiasts.

The public debate took place on the fairground and was organised in cooperation and with the kind support of DNK – Deutsches Nationalkomitee für Denkmalschutz (German Cultural Heritage Committee).