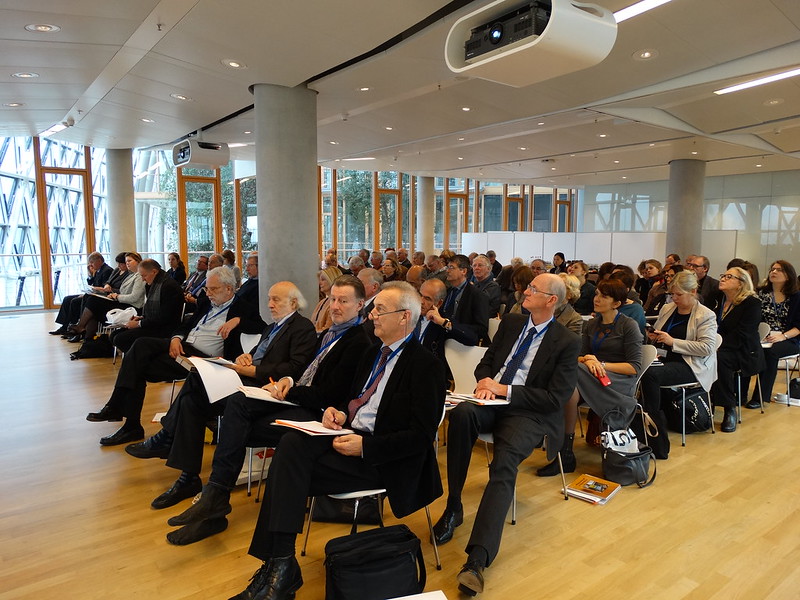 A policy session on “Funding Cultural Heritage in Europe” was held on 27 November at the EIB headquarters and was introduced by Maggy Nagel, Minister of Culture of Luxembourg and Acting President of the EU Council of Ministers. Minister Nagel welcomed the discussion on the vital issue of funding of cultural heritage in Europe and Luxembourg. She also presented the results of the EU Council of Ministers meeting of 24 November, placing a special focus on the Council Conclusions on Culture in the EU’s external relations. She reiterated the crucial role that cultural heritage has to play in favour of social integration, and in promoting respect and tolerance between various communities; hence the support of the EU Council of Ministers for the proposed European Year of Cultural Heritage 2018 under the proposed motto “Sharing Heritage”.

The EIB support and funding for cultural heritage was presented by two representatives of the EIB, Brian Field, who is also Professor at University College London, and Gerry Muscat, Head of the Regional and Urban Development Division at EIB.

Guy Clausse, Dean of the European Investment Bank Institute, stressed that “the meetings held in Luxembourg were important to testify the good cooperation between the EIB Institute and Europa Nostra, as well as with the Luxembourg Ministry of Culture. The Policy Session on 27/11 was a good opportunity to showcase the existing approach to cultural heritage in Luxembourg and also to get a better understanding on how an international financial institution like EIB contributes to funding cultural heritage projects.”

The Secretary General of Europa Nostra, Sneška Quaedvlieg-Mihailović,emphasized the value of cultural heritage as a vital resource and driver of sustainable development referring to the outcomes of the European cooperation project “Cultural Heritage Counts for Europe” which provides compelling evidence of the considerable positive impact cultural heritage has for the economy, society, culture and environment of Europe. Together with Denis de Kergorlay, Executive President, she presented a copy of the CHCFE Final Report to Minister Nagel.

The Council of Europa Nostra – which is composed of representatives of heritage organisations from all over Europe and dedicated individuals who are members of Europa Nostra – held two other working sessions, one in the EIB Headquarters and the other one (on 28/11) at the Château of Bourglinster (winner of a Europa Nostra Award in 1986) with main discussions focusing on the proposed European Year of Cultural Heritage 2018 strongly supported by Europa Nostra, and the deepening and widening of the organisation’s ever-growing Network.

These first ever meetings of Europa Nostra held in Luxembourg allowed the participants also to visit the EuroScope exhibition displaying masterpieces of the EIB’s invaluable collection of European contemporary art. The exhibition is organised by the EIB Institute until 24 January 2016 under the auspices of Luxembourg Presidency of the Council of the European Union.