During its General Assembly held online on 19 October 2020, Europa Nostra paid tribute and expressed its profound gratitude to Sir Christopher Audland, Honorary President of Europa Nostra, who passed away on 29 December 2019. 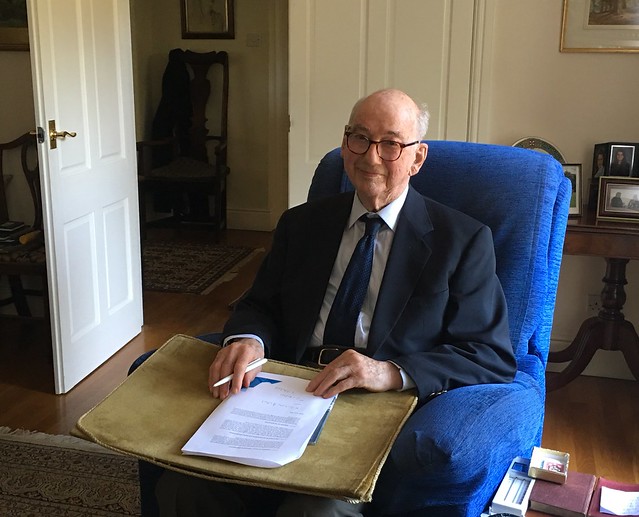 It is a special honour and emotion for us to pay tribute to our Honorary President, the late Sir Christopher Audland, who was one of the most prominent leaders in the entire history of Europa Nostra. He sadly passed away on 29 December 2019 at the age of 93.

Sir Christopher Audland joined the British Foreign Office in 1948, and proved a remarkable diplomat and policy maker throughout his career. As a committed European, he was one of the architects of the UK’s accession to the European Economic Community in 1973. He then held important positions at the European Commission: as Director General for Energy and as Assistant Secretary General. After his retirement in 1986, Sir Christopher has remained closely involved in European affairs particularly through his active involvement in the work of UK and European academic and cultural organisations, such as the National Trust, the Lancaster University, the European Opera Centre and, last but not least, Europa Nostra.

In his capacity of President of IBI (the International Castles Institute), together with Hans de Koster, Sir Christopher masterminded the successful merger between IBI and Europa Nostra in 1991. He became a Vice-President of the merged organisation with special responsibility for relations with the European Institutions. In 1993, he briefly became the Executive President ad interim of the merged organisation. In 1997, at the age of 70, he decided to retire from active involvement in Europa Nostra’s decision-making bodies. He was then elected the first Honorary President of Europa Nostra. Ever since, he has remained at the disposal of Europa Nostra in a much-appreciated advisory capacity.

In 2004, Sir Christopher was awarded a Europa Nostra Medal of Honour: “For his major contribution in bringing about the successful and lasting merger between Europa Nostra and the International Castles Institute, and for his wise leadership in extending the spread of representation and scope of activities of the merged organisation and in raising its status and profile with regard to the EU Institutions.”

Sir Christopher’s commitment to Our Europe, to our shared cultural heritage and to Europa Nostra in particular was exemplary. He generously placed his wide, diplomatic and European experience as well as his determined European vision and conviction at the service of an effective Europe-wide cooperation between heritage NGOs.

Sir Christopher Audland can best be described as a remarkable European, a first-class diplomat and a wise and constructive leader. His innate qualities of precision and perseverance have always been strengthened by his love of the “unity in diversity” of our shared cultural heritage composed both of historic monuments and of our cultural landscapes, and by his firm conviction that this heritage constitutes one of the binding factors in the on-going process of European integration.

As Secretary General, let me add that Sir Christopher was a very dedicated teacher, mentor and supporter of the young generation of dedicated Europeans. Personally, I shall always be grateful for the immense European diplomacy and policy knowledge, experience and wisdom that Sir Christopher generously transmitted to me, ever since our very first encounter at the Oxford and Cambridge Club in London in December 1991, only two days after I have joined the Europa Nostra Secretariat until our very last encounter, 27 years later, when I have had the great joy of visiting Sir Christopher at his historic home in the Lake District, on the occasion of his 92nd birthday on 7 July 2018. He was extremely pleased to hear about the success of the European Year of Cultural Heritage and was very proud to sign our Berlin Call to Action! I have no doubt that he would have also proudly signed our European Heritage Alliance Manifesto presented on this year’s Europe Day. And I am sure that he would have been very pleased if he could have attended the very well attended webinar which we organised together with Europa Nostra UK at the end of September. He would have been especially happy to hear our Executive President and myself saying that “there is no Brexit in Europa Nostra”.

The legacy of Sir Christopher will live on.