The local award ceremony for the restoration of the Basilica of Santa Maria di Collemaggio, winner of an European Heritage Award / Europa Nostra Award 2020, took place on 28 August in L’Aquila, Italy. Alessandra Vittorini, representing the Soprintendenza for L’Aquila e Cratere, which led the various phases of the rehabilitation project, received the bronze award plaque from Professor Paolo Vitti, Board Member of Europa Nostra. Due to the safety precautions against COVID-19, the ceremony was held for a restricted group of 40 attendees, but was followed live on social media by a large number of people (watch video of the ceremony). 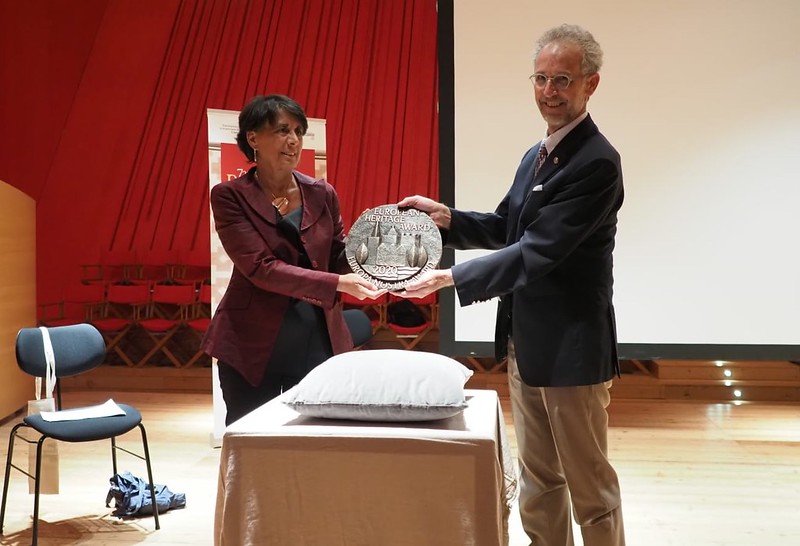 The return of the Basilica of Santa Maria di Collemaggio to the community of L’Aquila in December 2017 marked a watershed moment in the long process of recovery following a tragic earthquake that hit the region on 6 April 2009. Since the disaster, the Basilica has become an important place for the entire community to gather and has acted as a site of commemoration and celebration.

Professor Paolo Vitti, quoting the Awards’ jury, emphasised: “This intervention truly represents the rebirth of a city, the strong sense of spirituality and the participation of the community in this project must be considered as an integral piece of the whole. The entire project was based on a public-private partnership and involved the collaboration of three different universities. It has been carried out with an exemplary scientific basis relating to the seismic vulnerability of the building. The comprehensive approach taken to address the consequences of a natural disaster, including both the building and its contents, is exemplary. It is also notable that the programme includes the maintenance and monitoring of the building. The project is a model of best practice in the conservation of critically damaged sites all over the world”.

Alessandra Vittorini, Superintendent of Fine Arts and Landscape Archaeology for L’Aquila and Cratere, outlined the extensive restoration programme of the Basilica. The collapsed clustered pillars were reconstructed, and the stone cladding restored, reusing the recovered blocks. The nave’s octagonal pillars were restored by dismantling and reassembling the irreparable ones by replacing the badly damaged stones and inserting threaded metal bars. The arches, walls and the collapsed roof were each rebuilt. The floor, crushed under the fallen debris, was carefully recomposed. The Baroque organ, which had suffered extensive damage during the earthquake, was also recovered and reinstated in the Basilica. The frescoes, dating from the 13th-15th centuries, were consolidated and restored, as well as the baroque marble altars and the stucco work of the side-chapels. 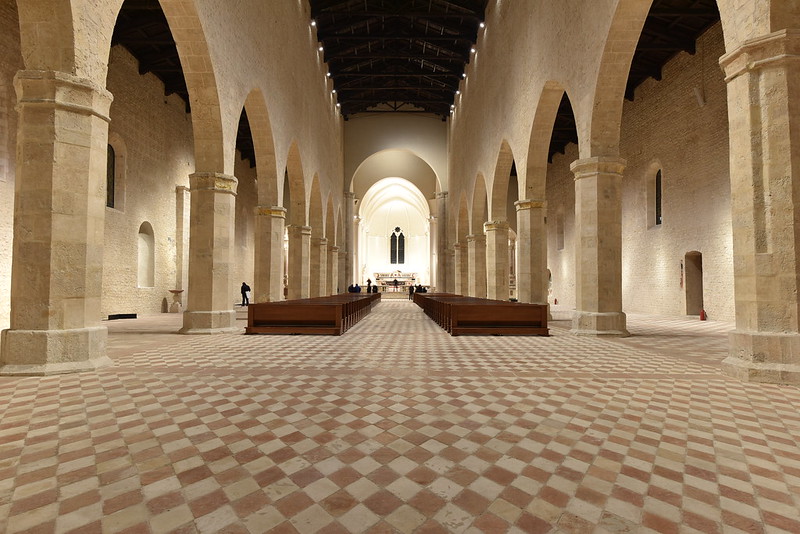 Following the reading of a congratulatory message from Catherine Magnant, Head of Cultural Heritage Policy at the Directorate General Education and Culture of the European Commission, Anna Conticello, Project Manager for the Creative Europe Desk in Italy, addressed the audience.

During the ceremony, Christian Greco, Director of the Museo Egizio in Turin, made a virtual presentation of the Turin Papyrus Online Platform – TPOP (Italy), and Giovanni Agresti, Université Bordeaux Montaigne/LEM-Italy, and Gianfranco Spitilli, University of Teramo/Bamboo Association, presented the Tramontana Network III (France, Italy, Poland, Portugal and Spain), both winners of the European Heritage Awards / Europa Nostra Awards 2020 in the category Research.

The ceremony ended with a virtual speech made by Pierluigi Sacco, IULM University, about the future prospects for L’Aquila, its rebirth and its cultural heritage, also in the light of the application of the city as Italian Capital of Culture 2022.