The online event symbolically took place on the day that the European Heritage Awards Ceremony should have taken place in Brussels, before it had to be cancelled due to the global pandemic. 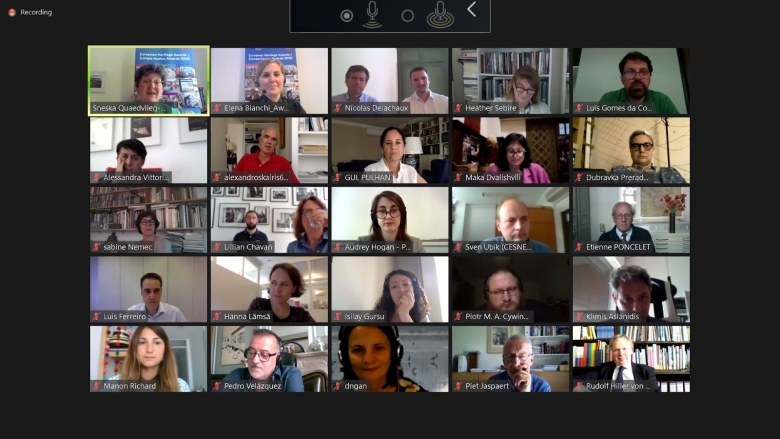 “We are here to applaud and celebrate your achievements and your extraordinary work. You are Europe’s heritage champions. We want to engage you in our heritage movement and we count on your help to convey the importance of cultural heritage for Europe’s recovery and rebirth to policy-makers at all levels”, said Mrs. Quaedvlieg–Mihailović. Mrs. Quaedvlieg–Mihailović also took the opportunity to launch the 2020 edition of the Laureates publication.

Themis Christophidou, Director General for Education, Youth, Sport and Culture at the European Commission, thanked Europa Nostra for the work carried out to make the European Heritage Awards/ Europa Nostra Awards the prestigious scheme it is today and thanked the laureates for their outstanding contribution to Europe’s culture and heritage.

“The COVID-19 crisis has had a huge impact on our society and has severely hit the cultural heritage sector. Yet, the heritage world has found new ways to bring people together despite physical distancing, for example through online means. I would like to thank all heritage professionals and volunteers for your resilience in face of these huge challenges”, Mrs Christophidou said.

Mrs. Christophidou also underlined how the European Commision is convinced that cultural heritage contributes to Europe’s wellbeing and a number of actions that are being undertaken to support the sector during the crisis, such as the Creatives Unite platform and the European Commission Expert Group on Cultural Heritage, of which Europa Nostra is a member. Other initiatives by the European Commission include the ambitious EU budget and Recovery Plan, which will fund culture and heritage through initiatives like ReactEU, InvestEU, Creative Europe and the social media campaign entitled ‘This Summer I visit Europe’ which invites Europeans to visit heritage sites and museums that are in close proximity to them.

The laureates from each category were then invited by each of the jury chairs to speak about what the Award means to them, what they expect from joining this network of excellence, and to share their message for Europe. Elena Bianchi, Heritage Awards Coordinator, moderated the sessions.

Koen Van Balen, Chair of the Jury for category Conservation, welcomed the winners in this category. He stressed how cultural heritage is valued and embraced by diverse communities. “Excellent projects empower communities to take care of their cultural heritage as significant places, as meaningful objects or as ancestral practices to transmit. Conservation and re-appropriation revitalise significant heritage places for the benefit of their communities”, he said.

Among the laureates in this category to speak was Job Roos, Partner / Architect, Braaksma & Roos Architects who represented the LocHal, Tilburg, The Netherlands. He spoke about how the LocHal exemplifies how cultural heritage can be a contemporary force, while preserving its architectural and historic value thanks to a minimal intervention. “At LocHal, people from all backgrounds come together, it is a ‘Palace of the People’. It is a project for the people of Tilburg, and it fosters liveability and social cohesion. Cultural heritage is all about the people”, he said.

Marta Sanz Gaitero, a representative of another winner in this category, the Subterranean Caves and Wineries of El Cotarro in Spain, stated: “This Award belongs to all the volunteers and professionals who believed in this project. I hope this award will be an inspiration for others: every great journey starts with a small step.”

The laureates in category Research were introduced by Etienne Poncelet, the Chair of the Jury. Luis Costa, President, Binaural Associaçao Cultural de Nodar and representative of one of the winning projects, Tramontana Network III, a collaborative project between partners in France, Italy, Poland, Portugal and Spain, spoke about how meaningful the Award is to what is a rural-based network of grassroots organisations. “This recognition is shared with so many mountain communities, local governments and organisations, research departments, artists, and so many other actors that contributed to this project”, he said.

The laureates in the Dedicated Service were introduced by Androulla Vassiliou, Chair of the Jury in this category.

Lillian Chavan, Executive director of the Société de Lecture, in Geneva, Switzerland spoke of how encouraging the Award was in what are very trying times.

The final category of laureates who were presented and introduced by Maka Dvalshvili, Chair of the Jury for category Education, Training and Awareness-raising.

Piotr M. A. Cywiński, Director of the Auschwitz-Birkenau State Museum and one of the partners of Auschwitz. Not long ago. Not far away, Poland/Spain had a strong message regarding cultural heritage and tolerance. “This project emerged from a cooperation between the Auschwitz-Birkenau State Museum and the Spanish company Musealia. Together, we developed the largest itinerant exposition ever made on the Auschwitz Memorial. At a time where there is a new wave of intolerance and xenophobia in Europe and the world, reading our past becomes urgent. I would like to sincerely thank all the team behind this project and congratulate all the laureates for their work”, he said.

Pedro Velazquez, Deputy Head of the Creative Europe Unit at the Directorate General Education, Youth, Sport and Culture at the European Commission wrapped up the event and thanked the winners for sharing their interesting and inspiring experiences.

Mr. Velazquez highlighted how all of the awarded projects illustrate many facets of European cultural heritage. He emphasised the importance of heritage to local communities, for those who wish to experience Europe through tourism and underlined how the laureates have shown the resilience of the sector in the face of an unprecedented crisis. “The endurance and survival of our common heritage throughout centuries of adversities is a good metaphor to give us hope for the future”, he said.

Sneška Quaedvlieg–Mihailović concluded the meeting by thanking the Jury chairs, all jury members, as well as the staff of both Europa Nostra and the European Commission. She noted the emotion and pride shown by the laureates for having been awarded. She underlined the need “to convince European leaders that cultural heritage can bring so many benefits to our societies and economies; that cultural heritage can be part of the solution as shall be part of Europe’s recovery”. Mrs. Quaedvlieg–Mihailović also highlighted how the laureates’ projects illustrate the value of cultural heritage and the principles of the European Heritage Alliance Manifesto.