The Prehistoric Picture Project, winner of an EU Prize for Cultural Heritage / Europa Nostra Award 2016 in the Research category, was honoured at the McDonald Institute for Archaeological Research in Cambridge on the afternoon of 17 October 2016. Dr Frederick Baker and Dr Christopher Chippindale, Directors of the Prehistoric Picture Project, received the Award from Sneška Quaedvlieg-Mihailović, Secretary General of Europa Nostra, who also gave a lecture entitled ‘Civil Society in Action for Heritage in Europe’ as part of the Cambridge Festival of Ideas. Jeremy O’Sullivan, Cultural Attaché at the European Commission Representation in the UK, participated in the event.

“This prestigious European award is a reward for the whole of the European interdisciplinary team of archaeologists, engineers and artists who created this project,” emphasised Dr Frederick Baker. 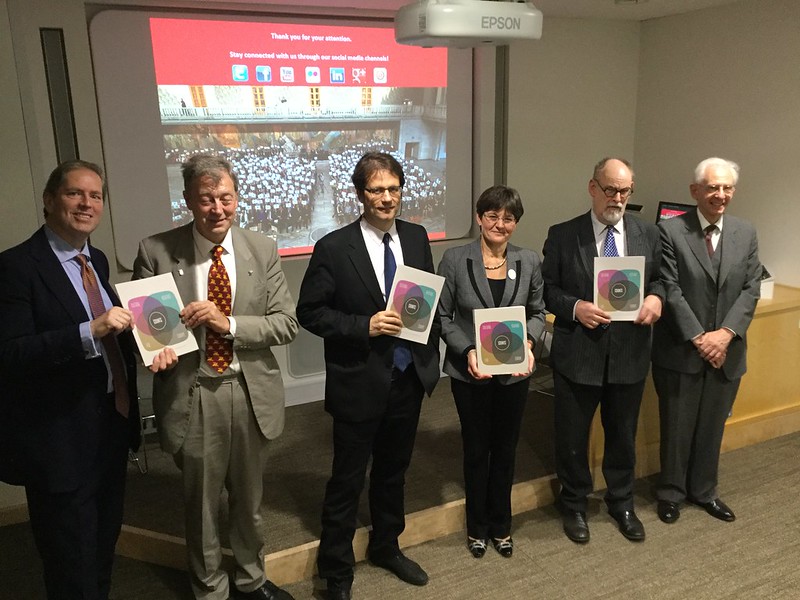 The Prehistoric Picture Project is an ambitious project that sought to bring cultural heritage to a larger audience by 3D scanning rock art in Valcamonica, a UNESCO World Heritage site in the Italian Alps. The project, led by the Cambridge University with contributors from the Centro Camuno di Studi Preistorici, St Pölten University of Applied Sciences and the Bauhaus University Weimar, uses film, photography, dance, animation, music, 3D printing and scanning technology to record and re-present these open-air rock carvings, not only preserving the prehistoric images for posterity, but bringing them to life with real depth.

“The Prehistoric Picture Project had the idea to apply the fast-changing technologies of digital graphics to invigorate, even to revolutionise the standard ways in which we study prehistoric art, combining the newest with the oldest insights and images from the oldest technologies in European graphics. The University of Cambridge has applied new technologies, but above all new thinking to the richest and most varied single body of prehistoric images in Europe, the many thousand ancient carvings in the north Italian region of Valcamonica, in the Alpine foothills,” commented Dr Christopher Chippindale.

The team worked with Cambridge archaeologist Dr Craig Alexander, based in Italy, to understand the art’s place in the landscape. Using the 3D images of the engravings, the team produced interactive exhibits and videos, which aimed to make sense of the cinematic elements of this art.

“The valley can be seen in many senses of the word as, one big picture, made of thousands of individual details such as a Breugel or a Lowry painting. But, it is also a ‘Picture’ in the American sense of film or movie. That is because it is not hidden in a cave, but out in the open where the sun can create proto-cinematic effects, making individual images appear and disappear according to the time of day and the weather. This is an Award for arts-based research in the digital humanities. It uses the digital and performative arts to encourage both scholars and the public to examine the past through evidence-based historical imagination,” explained Dr Frederick Baker.

Sneška Quaedvlieg-Mihailović, Secretary General of Europa Nostra, highlighted: “The Prehistoric Picture Project perfectly illustrates that heritage preservation and modern technology can go hand in hand, reinforcing Europa Nostra’s belief that preserving our culture heritage is not simply an effort to keep the past alive, but a thriving platform for innovation and creativity. Furthermore, this project has shown us that ancient imagery can still be relevant, moving and inspirational in a fast-moving society such as ours”.

Dr Peter Collins, Chairman of Europa Nostra UK, added: “The combination of fine scholarship and the latest technical advances have provided an exemplar for Europe and the whole world.”

In her lecture, Sneška Quaedvlieg-Mihailović presented Europa Nostra and its flagship programmes and shared its view on the European Year of Cultural Heritage in 2018.

Dr Simon Stoddart, Acting Deputy Director of the McDonald Institute, extended his welcome to the visiting delegation from Europa Nostra and explained how honoured the McDonald Institute was to host such a prestigious celebratory event. “I very much hope that the links between the two institutions will strengthen over the coming years in support of the European heritage that we share”, he affirmed.