The launch event of the 2018 EU-China Tourism Year took place on 19 January at the Doge’s Palace in the UNESCO World Heritage city of Venice. It brought together high-level representatives from European institutions, the China National Tourism Administration, the City of Venice and tourism stakeholders. The EU-China Tourism Year, which is co-organised by the European Commission, seeks to promote lesser-known destinations and improve travel and tourism experiences. 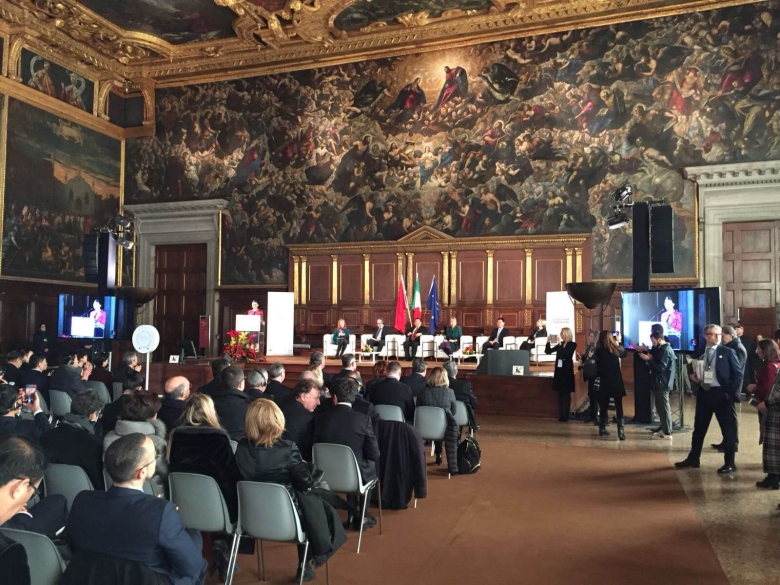 In her opening speech, Elżbieta Bieńkowska, European Commissioner for Internal Market, Industry, Entrepreneurship and SMEs, highlighted the importance of promoting sustainable tourism by stressing the need to respect local communities and to promote lesser known destinations.

Although Commissioner Bieńkowska did not mention the 2018 European Year of Cultural Heritage, which is managed by the European Commission, she emphasised that the EU-China Tourism Year provides an opportunity for tourism and heritage stakeholders to cooperate. In fact, one of 10 long-term impact projects initiated for the European Year is dedicated to tourism and heritage: “responsible and sustainable tourism around cultural heritage”.

In her address, the Italian Secretary of State Dorina Bianchi stressed the importance of sustainable management of cultural heritage and tourism. This is all the more relevant given that the Venice lagoon was nominated as THE most endangered heritage site in Europe in 2016 by Europa Nostra and the European Investment Bank Institute.

Being closely involved in Europa Nostra’s cooperation with tourism organisations – such as the European Travel Commission (ETC), the European Cultural Tourism Network (ECTN) and the Network of European Regions for a Sustainable and Competitive Tourism (NECSTouR), – all of which are members of the European Heritage Alliance 3.3 – , Europa Nostra’s Vice-President Piet Jaspaert also used the occasion to discuss joint initiatives with ECTN Secretary-General Manos Vougioukas, ETC Director-General Eduardo Santander and NECSTouR President Patrick Torrent, who also attended the opening event.

One the tangible outcomes of this cooperation is the special edition of the ECTN Award Destination of Sustainable Cultural Tourism 2018 dedicated to “Cultural Heritage as an Asset for Responsible and Sustainable Tourism”. This special edition is organised by the ECTN in partnership with Europa Nostra and ETC as a contribution to the European Year of Cultural Heritage 2018.

In view of the objectives of the EU-China Tourism Year of promoting lesser known destinations, the launch event in Venice provided an ideal occasion to widely disseminate the information about the special edition of the ECTN Award, and thus, also spreading one of the key messages of the European Year of Cultural Heritage.

The opening event of the EU-China Tourism Year was held in the most majestic room of the Doge’s Palace, the Chamber of Great Council.

The EU-China Tourism Year was announced in July 2016 by the European Commission President Jean-Claude Juncker and the Chinese Prime Minister Li Keqiang.