To conclude the European Cultural Heritage Summit 2019 which kicked-off on 27 October in Paris, a group of delegates joined an unusual yet most interesting excursion to Versailles, city of the royalty and especially of Louis XIV. The Mayor of Versailles and former Director General of the Fondation du Patrimoine, François de Mazières, guided the 50 participants through the city and its lesser-known heritage gems, before hosting the group at the City Hall for a lunch break. In the afternoon, all headed to the Palace of Versailles for parallel visits kindly offered by a member organisation of Europa Nostra, the Association of European Royal Residences and its President Catherine Pégard.

The tour began in the recently restored Espace Richaud, where François de Mazières welcomed the participants and presented the exemplary project conducted under his mandate to give new life to this former Royal Hospital. After the hospital ceased its activities, the building suffered rapid deterioration and even destruction caused by three successive fires. Of a duration of over 4 years, the safeguarding and rehabilitation of the site comprised the use of the chapel as a cultural space as well as the development of social and student housing. 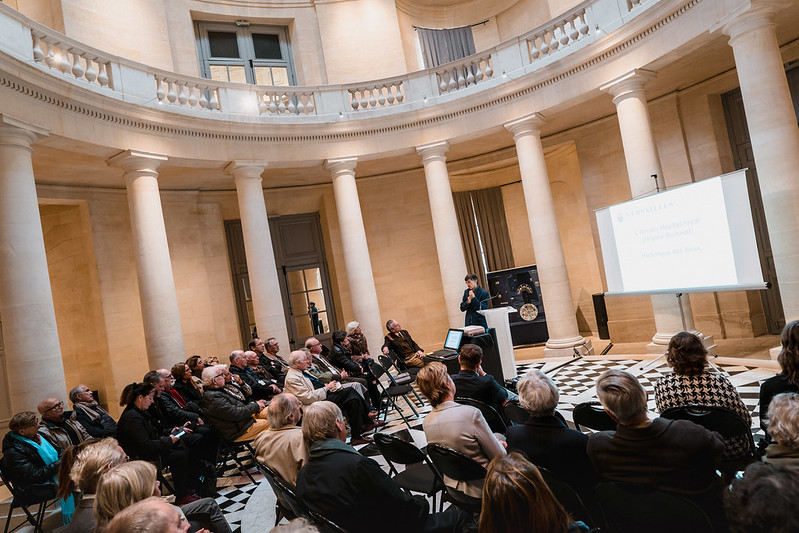 The second stop was the Central Library and Gallery of Foreign Affairs where Vincent Haegele, Director of the Library, welcomed and unveiled to the curious delegates some of its treasures, which are usually not displayed to the public. The Library is the former Ministry of Foreign Affairs & Navy of Louis XV, constructed late 18th century by the Duc de Choiseul, State Secretary of Foreign Affairs. Though the rooms, all named after a European city, one can admire paintings and manuscripts bearing witness to the rich history of Europe. It is also home to one of the copies of the Constitution of the 13 States of America, that our American delegates were particularly proud to see. 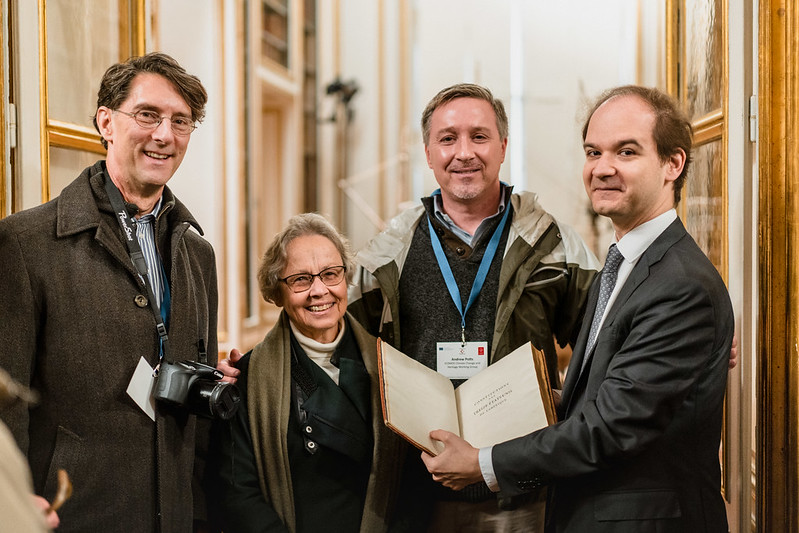 During the lunch reception kindly hosted in the magnificent reception room of the City Hall, François de Mazières warmly thanked all participants for their presence. The day before, the Mayor of Versailles was among the speakers of the European Policy Debate “Cultural Heritage at the Heart of the Revival of the European Project” organised in the frame of the European Cultural Heritage Summit in Paris. As a way to express his gratitude, he handed copies of the book “De l’Hôpital Royal au Carré des Siècles : L’histoire d’une résurrection : l’îlot de l’hôpital Richaud” to Europa Nostra’s Secretary General Sneška Quaedvlieg-Mihailović, Vice-President Bertrand de Feydeau and Honorary President Denis de Kergorlay. 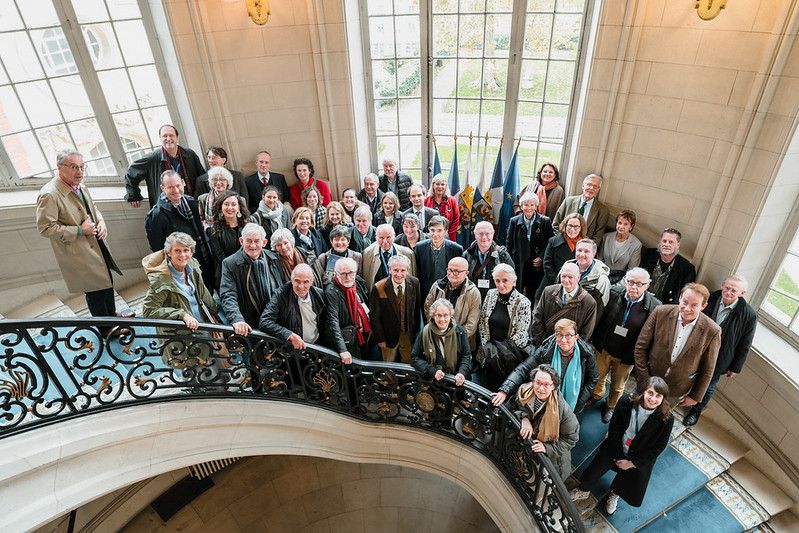 The afternoon visits started with the Sculptures and Mouldings Gallery guided by Alexandre Maral, General heritage curator. This gallery, located in the Versailles Stables, particular for its wonderful structure and vaulted ceilings, is home to multiple mouldings based on Antiquity works. Delegates were crossing paths with the Farnese Hercules, the Quirinal Dioscures as well as original marbles from the Garden of Versailles. 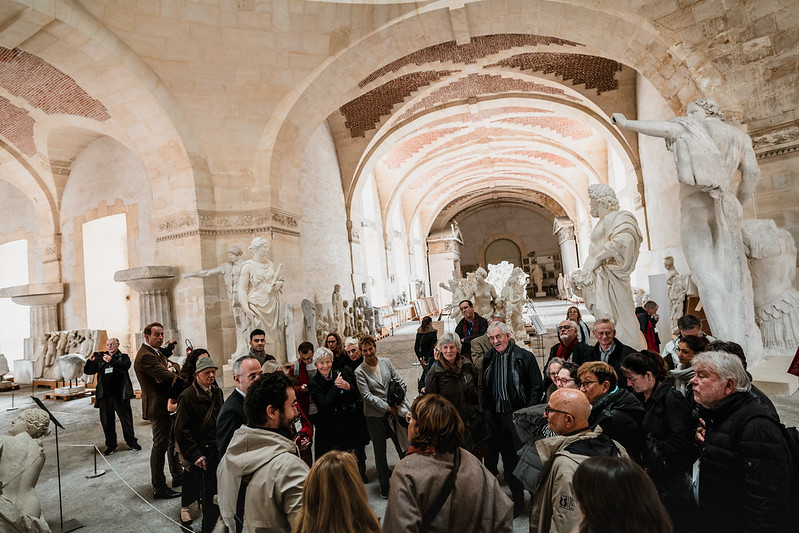 To end this journey, the delegation was led to the stunning Palace of Versailles where two parallel visits were kindly organised by a member organisation of Europa Nostra, the Association of European Royal Residence. One visit focused on the highlights of the Palace, including the Hall of Mirrors, the King’s State Apartment and the Queen’s Apartments. The other visit guided by Elisabeth Claude, General Collections curator, under the theme “At the Royal Table” provided insight into the monarchy’s tradition which gave birth to the famous “service à la Française” and the gastronomy associated with it ever since. 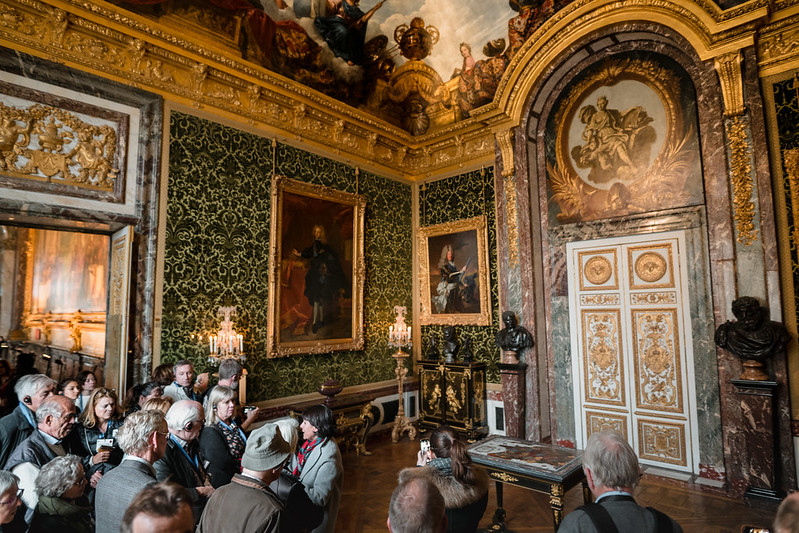