Both participants and organisers were overwhelmed by the many inspiring examples of how cultural heritage contributes to responsible and sustainable tourism that were presented at the 11th International Conference for Cultural Tourism in Europe, held on 25-27 October in the Cypriot city of Paphos. The conference highlight was the announcement of the 18 winners from 10 European countries of the Destination of Sustainable Cultural Tourism Awards 2018, which were celebrated on the first day of the conference. The 2018 special edition of the Awards are jointly organised by the European Cultural Tourism Network (ECTN), Europa Nostra and the European Travel Commission as a contribution to the European Year of Cultural Heritage 2018, in particular to the European Initiative “Tourism & Heritage: Sustainable and Responsible Tourism around Cultural Heritage”. 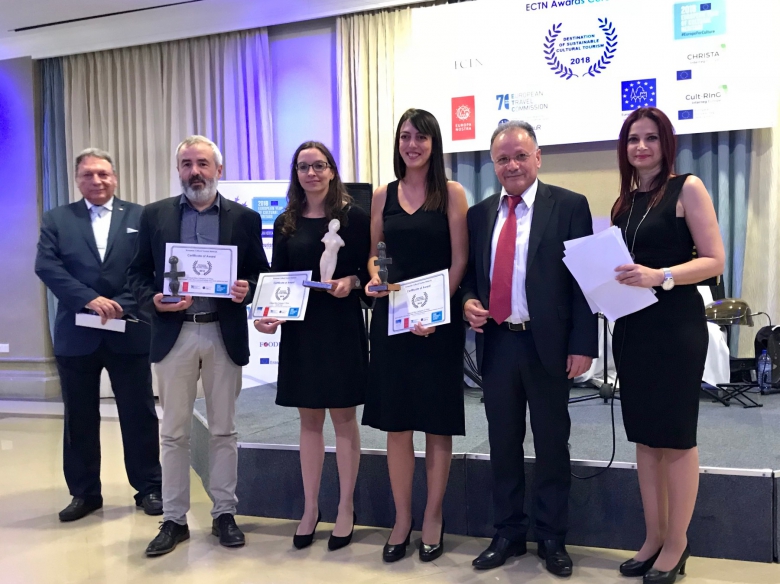 The Ceremony for the 2018 special edition of the Awards, which was held on the evening of 25 October, started with the announcement of the 18 winners.

Winners of the Destination of Sustainable Cultural Tourism Awards 2018

1st Prize: Colonies of Benevolence of Wortel and Merksplas by Kempens Landschap, a Flemish non-profit organisation that aims to protect valuable landscapes in the province of Antwerp, Belgium

3rd Prize: Rota do Românico – An experience founded on History by VALSOUSA – Associação de Municípios do Vale do Sousa, Portugal

2nd Prize: Recovery and revaluation of the cultural and natural heritage of the historic garden Parc Samà by Cambrils Municipal Tourist Board, Spain

2nd Prize: Creation of a Cultural Dipole in a cross border area Creation of two Museums/ cultural poles, in Serres (Greece) and in Petrich (Bulgaria), cooperation on tourism and culture by Municipality of Serres, Greece

Contributions by Cultural and Creative Industries

Special Prize of the Jury

Europa Nostra’s Vice-President Piet Jaspaert handed over the Awards to the laureates in the category Religious and Pilgrimage and was impressed by these wide array of best practices.

The conference programme was packed with presentations of case studies and best practices, showing how cultural heritage and sustainable cultural tourism can go hand in hand. Europa Nostra’s Vice-President represented the voice of European cultural heritage NGOs and moderated a workshop on military and maritime heritage. Among the projects presented were “World War 1: Centenary lessons learned in Flanders Fields” from Belgium as well as “Aldeias de Mar”, an integrated approach project on maritime traditions and strategies for tourism development from Portugal. Several parallel sessions saw an array of case studies and concepts for reconciling heritage and tourism from across Europe.

🎉Congratulations to the winners of #sustainabledestination2018 !👏 Our Vice-President Piet Jaspaert was delighted to meet you in Pafos at ECTN conference😀 So many brilliant examples of sustainable cultural tourism for heritage 🏞️⛪️🏭⛵️#EuropeForCulture @europe_creative pic.twitter.com/Sx350WTrLh

The second day of the conference, which is organised by ECTN, was dedicated to a debate between representatives from European Union institutions and pan-European bodies. Piet Jaspaert presented how the European Heritage Alliance 3.3 and its members, such as ECTN and Europa Nostra, had been driving forces behind the European Year of Cultural Heritage. Europa Nostra’s Vice-President also presented the Berlin Call to Action: “Cultural Heritage for the Future of Europe” to conference participants as one of the main outcomes of the European Cultural Heritage Summit held last June in Berlin and invited all those present to support the Berlin Call and sign it online.

“Stronger together!” Europa Nostra’s Vice-President plays tribute to achievements of #EuropeanHeritageAlliance for European Year at international conference on cultural tourism in Pafos & calls on all conference participants to sign the #BerlinCallToAction ✍️#EuropeForCulture pic.twitter.com/IXdSGOxwbo

Another important initiative, the Declaration of Tourism and Cultural Heritage “Better Places to Live, Better Places to Visit”, was presented by Sandra de Puig from the Network of European Regions for Competitive and Sustainable Tourism (NECSTouR), an Alliance member. Iulia Niculica from the European Travel Commission outlined the opportunities of the ongoing EU-China Tourism Year.

Androulla Vassiliou, Europa Nostra’s Vice-President and former European Commissioner in charge of culture, delivered a keynote speech on the “Synergy between Tourism and Cultural Heritage as a rewarding challenge”, highlighting the manifold efforts of Europa Nostra and its key partners, such as ECTN, in reconciling the often times existing conflicts between tourism and heritage.