Paris, 29 October 2019 – The winners of the 2019 European Heritage Awards / Europa Nostra Awards, Europe’s top honour in the field, were celebrated this evening with the Grande Soirée du Patrimoine Européen at the recently restored Théâtre du Châtelet in Paris. On this occasion, Plácido Domingo, President of Europa Nostra, the leading European heritage network, and Tibor Navracsics, European Commissioner for Education, Culture, Youth and Sport, announced the 7 Grand Prix laureates. The Grand Prix winners were selected by a jury of experts and the Board of Europa Nostra from among this year’s 25 winning achievements and will receive €10,000 each. The winner of the Public Choice Award was announced by the author, broadcaster and past laureate of the Awards, Stéphane Bern. The winner was chosen by the 8,500 people who voted for their favourite heritage achievements in Europe via an online poll conducted by Europa Nostra. The Grande Soirée was the largest public event of the European Cultural Heritage Summit, which has been taking place in Paris from 27-30 October. 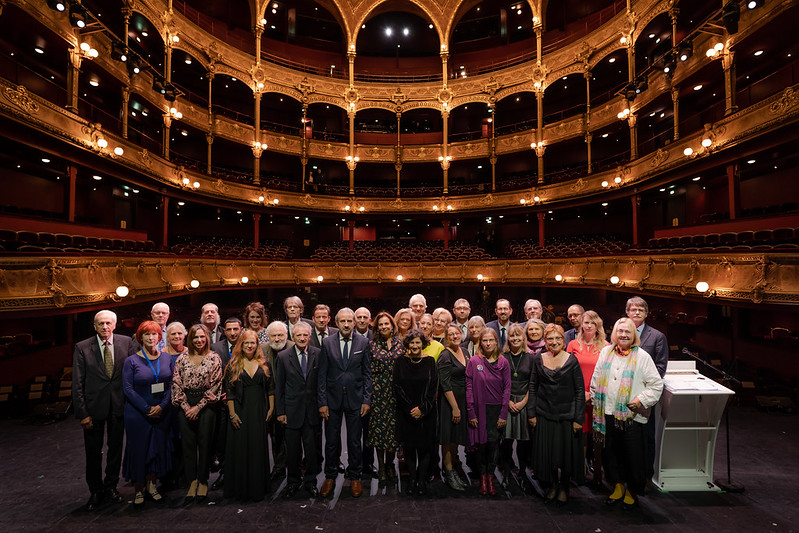 PHOTOS OF THE CEREMONY

The 7 Grand Prix laureates are:
Category Conservation
Cathedral of Saint Bavo, Haarlem, THE NETHERLANDS
The Queen Louise Adit Complex, Zabrze, POLAND
Oratory of the Partal Palace in The Alhambra, SPAIN

In addition, the Paris Fire Brigade, the Guardian Angels of Notre-Dame, received a European Heritage Award / Europa Nostra Award in recognition and admiration of their courageous and victorious fight against the flames that devastated Notre-Dame de Paris on the evening of 15 April 2019. The Awards Ceremony was enhanced with a performance by the Adult Choir of the Maîtrise Notre-Dame de Paris, in honour of the history and the spirit of the Cathedral. Read a separate press release here.

Plácido Domingo, President of Europa Nostra, stated: “It has been an immense pleasure to meet and celebrate all Award winners on stage at the beautifully restored Théâtre du Châtelet in the heart of Paris. The remarkable work and tireless commitment of each one of these heritage heroes is an example and inspiration for all of us who value and care for our cultural heritage. As proven by our past laureates, this Award is an effective stepping stone to the continuation and future success of their endeavours and shines a spotlight on their achievements, in turn inspiring other heritage champions across the continent. We at Europa Nostra wholeheartedly encourage them to make the most of this Award, and welcome them to our ever-growing pan-European network of excellence for heritage.”

Tibor Navracsics, European Commissioner for Education, Culture, Youth and Sport, said: “I warmly congratulate this year’s winners of the European Heritage Awards / Europa Nostra Awards on their success and well-deserved recognition. Coming from all parts of Europe and with achievements ranging from ground-breaking research and skilful restoration, to high-quality education and training, or a lifetime of dedication to cultural heritage, each winner is unique. Yet they all have one thing in common: they are writing Europe’s most successful heritage stories. I sincerely thank each one of the winners for their valuable contribution and commitment to preserve, protect and enhance Europe’s shared cultural heritage for present and future generations. With their work, they are helping us ensure that the 2018 European Year of Cultural Heritage has a lasting impact.”

The Awards Ceremony was attended by more than 1,000 people, ranging from high-level officials from EU Institutions and Member States to leading representatives of heritage organisations from all over Europe. The announcement of the Grand Prix and the Public Choice Award was followed by a concert by the world-renowned Greek-Russian conductor Teodor Currentzis and his ensemble MusicAeterna and the soprano Sandrine Piau.

The European Cultural Heritage Summit is hosted by Europa Nostra under the high patronage of the President of the French Republic, Emmanuel Macron. It is supported by the European Commission, the Fondation du Patrimoine and the Mission Bern well as many French and European partners, associates and private sponsors.

Category Conservation
Cathedral Basilica Saint Bavo Haarlem, THE NETHERLANDS
The Cathedral of Saint Bavo in Haarlem was designed by Dutch architect Joseph Cuypers and was consecrated in 1898. With limited maintenance over the last century, the cathedral faced extensive structural and other conservation issues. The project has returned the cathedral to its former glory through the refurbishment of the interior with new works of art, and establishing it as a social and cultural centre in Haarlem. It was funded from various sources, including central, provincial and local governments, the diocese and the parish as well as various foundations and individuals. The jury commended the holistic approach adopted by the conservation team, noting that “through investigation, a correct interpretation of some hidden, symbolic elements of the decoration was made.”

The Queen Louise Adit Complex, Zabrze, POLAND
The revitalisation of the Queen Louise Adit mining complex was carried out by the Coal Mining Museum in Zabrze, which owns and operates the complex, in close cooperation with local and regional authorities. The main aim of this challenging project was to preserve the mining heritage by adapting and revitalizing the area for cultural, educational and tourism purposes. The project, carried out over 15 years, was funded with grants from the European Union, from the Municipality of Zabrze, the Province of Silesia, the National Environmental Protection Fund as well as with funds from the Coal Mining Museum in Zabrze. The jury noted that “coal mining sites such as this one are in decline. Maintaining the heritage of historic coal mines is vital for future generations as it is an important element of the history of not only Poland but also of Europe.”

Oratory of the Partal Palace in The Alhambra, SPAIN
The Oratory of the Partal Palace embodies the Islamic roots of the Alhambra, the fortified palace complex in the city of Granada with its richly ornamented architecture, arabesque plasterwork and an intricately decorated timber frame and wooden ceilings. The World Monuments Fund and Robert W. Wilson Challenge co-financed the restoration work, in partnership with the public institution of the Council of the Alhambra and Generalife. “An important part of European, cross-cultural history is represented at this site. Its restoration, an excellent example of public-private heritage partnership, is based on thorough interdisciplinary, scientific research and has revealed further details about Nasrid construction and carpentry technology”, the jury noted.

Category Research
RomArchive – Digital Archive of the Roma, GERMANY
RomArchive is an international digital archive for Romani arts – a growing collection of art of all types, complemented by historical documents and scholarly texts. The archive enables the Roma to reclaim and form the narrative around their community. RomArchive’s development, until its launch, was mainly supported by the German Federal Cultural Foundation. “The subject of this research is essential for the history of the people of Europe”, the jury said, “Roma, with twelve million people, constitute the largest neglected minority in Europe. This archive is particularly innovative as it pays attention to the self-representation of Romani identities, expressing both tangible and intangible aspects of this heritage and moving away from the stereotypical perceptions of Roma”.

Category Education, Training and Awareness-Raising
History Radar 1938, Vienna, AUSTRIA
This project was created by a group of filmmakers, historians and programmers to tell the story of the so-called Anschluss of Austria, on the occasion of its 80th anniversary. On 11 March 2018, the present Chancellery on the Ballhausplatz in Vienna served as a screen on which the story of the annexation was projected. During the Anschluss, this was the scene of the power struggle between the local Nazis (following orders from Berlin) and the Austrian President. Thousands of users were reached via the internet, radio, television, and mobile phones, as well as through analogue media such as postcards, lectures, and print. “This innovative approach enables a more nuanced understanding of individual responsibilities in securing democracy and the common values of society”, the jury said.

Stewards of Cultural Heritage, GERMANY
The project Stewards of Cultural Heritage, a part of the “Stunde Null” project of the Archaeological Heritage Network and supported by the Federal Foreign Office and the Gerda Henkel Foundation, was conceived to help safeguard Syrian cultural heritage through capacity building with Syrian heritage specialists who currently reside in Turkey. “This is an excellent, international and collaborative training initiative, involving a variety of stakeholders and addressing an important current issue with pan-European relevance,” the jury said.

Background
The European Heritage Awards / Europa Nostra Awards were launched by the European Commission in 2002 and have been run by Europa Nostra ever since. They celebrate and promote best practices related to heritage conservation, research, management, voluntarism, education and communication. In this way, they contribute to a stronger public recognition of cultural heritage as a strategic resource for Europe’s economy and society. The Awards are funded by the Creative Europe programme of the European Union.
In the past 17 years, organisations and individuals from 39 countries have submitted a total of 3,032 applications for the Awards. Concerning the number of entries by country, Spain is first in the ranking, with 527 projects, followed by Italy, with 308 entries, and the United Kingdom, with 299 applications. With regard to the categories, Conservation has had the most submissions (1,744). Next comes Education, Training and Awareness-Raising (555), then Research (381), and, finally, Dedicated Service to Heritage (352).
The European Heritage Awards / Europa Nostra Awards highlight best practices, encourage the cross-border exchange of knowledge and connect various stakeholders in wider networks. The Awards bring major benefits to the winners, such as greater (inter)national exposure, follow-on funding and increased visitor numbers. In addition, the Awards foster a greater understanding of our shared heritage amongst the general public. The Awards are therefore a key tool to promote Europe’s heritage.

Europa Nostra is the pan-European federation of heritage NGOs which is also supported by a wide network of public bodies, private companies and individuals. Covering more than 40 countries in Europe, the organisation is the voice of civil society committed to safeguarding and promoting Europe’s cultural and natural heritage. Founded in 1963, it is today recognised as the most representative heritage network in Europe. Plácido Domingo, the world-renowned opera singer, is the President of the organisation.
Europa Nostra campaigns to save Europe’s endangered monuments, sites and landscapes, in particular through the 7 Most Endangered programme. It celebrates excellence through the European Heritage Awards / Europa Nostra Awards. It also contributes to the formulation and implementation of European strategies and policies related to heritage, through a structured dialogue with European Institutions and the coordination of the European Heritage Alliance 3.3.

Creative Europe is the EU programme that supports the cultural and creative sectors, enabling them to increase their contribution to jobs and growth. With a budget of €1.46 billion for 2014-2020, it supports organisations in the fields of heritage, performing arts, fine arts, interdisciplinary arts, publishing, film, TV, music, and video games as well as tens of thousands of artists, cultural and audiovisual professionals. The funding allows them to operate across Europe, to reach new audiences and to develop the skills required in the digital age.