With the aim to strengthen the capacity of its Member Organisations, Europa Nostra organised an intense three-day programme in Brussels on 15-17 April 2015. Chief Executive Officers of heritage NGOs (or their representatives) from 13 European countries – Albania, Armenia, Austria, Belgium, Finland, France, Greece, Italy, the Netherlands, Romania, Serbia, Spain and the United Kingdom – participated in the first edition of the Capacity Building Days.

The programme was conceived with a dual goal: informing heritage NGOs about EU policy on cultural heritage and funding possibilities available while at the same time providing a platform for exchange of good practice amongst NGOs themselves. This was done by means of presentations, roundtable discussions and participation in high-profile networking events. 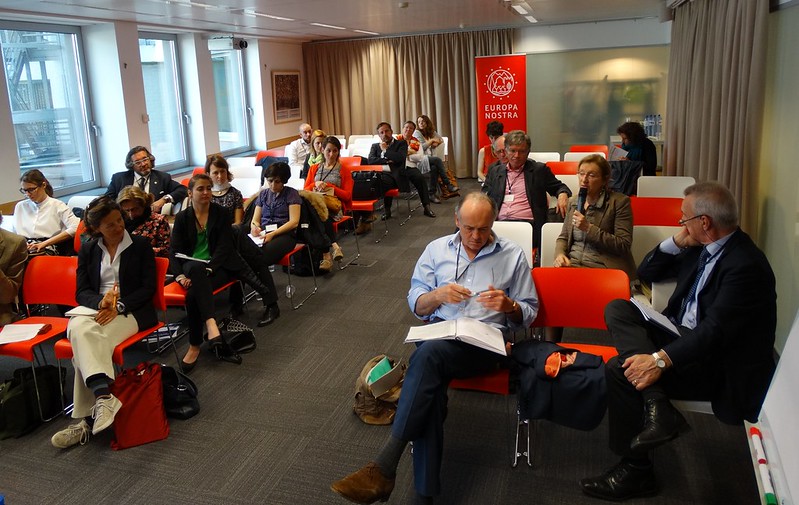 The representatives from Europa Nostra’s Member Organisations attended the European Heritage Label Ceremony at the Bibliothèque Solvay on 15 April, during which 16 sites were recognised as bearing a particular significance for European cultural heritage. The participants in the Capacity Building Days also took part in a networking ‘pop-up debate’ hosted by Bertelsmann at its Brussels Office on 16 April, upon the initiative of Irene Braam, Head of Bertelsmann Brussels Liaison Office. They also exchanged views with Michel Magnier, Education and Culture Director at the European Commission, on the latest policy developments on cultural heritage in the European Commission; with Zoltan Krasznai, who works in the European Commission Directorate General for Research and Innovation, on the links between cultural heritage and the Horizon 2020 strategy; and withMiltiades Kyrkos, Greek Member of the European Parliament on the relation between cultural heritage and sustainable tourism.
The roundtable discussions were kicked off with a rich exchange of views on the proposal to establish 2018 as the European Year of Cultural Heritage, moderated by Piet Jaspaert, Member of the Board of Europa Nostra, during which myriad ideas and proposals were put forward, notably emphasizing the important role of civil society in carrying out this year. Europa Nostra will present Commissioner for Education, Culture, Youth and Sport, Tibor Navracsics, with a document summarising these ideas, thus providing concrete input from the civil society to the ongoing debate, during their bilateral meeting on 11 May 2015.

The other roundtable discussions touched on innovative management and funding models (moderated by Kate Pugh, the Heritage Alliance), participatory approach to cultural heritage governance (moderated by John Sell, Executive Vice-President of Europa Nostra) and innovative cross-border NGO partnerships (moderated by Costa Carras, Vice-President of Europa Nostra). These discussions took place in the EU Info Point thanks to the hospitality of Jimmy Jamar, Head of the European Commission Representation to Belgium.

As a result of these different events and roundtable discussions, participants realised that the challenges facing heritage NGOs in terms of access to funding and setting up sustainable management models are similar across Europe. They, therefore, welcome the opportunity to be able to share their experience as well as the practical solutions they found in response to obstacles they were confronted with, giving substance the well-known adage: ‘hardship can trigger creativity’.

“Energising and fruitful” were the two words used by Simon Murray, CEO of the National Trust for England, Wales and Northern Ireland, to grasp the gist of the Capacity Building Days.

Caroline d’Assay, Board Member of the Pro Patrimonio Foundation from Romania, pointed out the added value of sharing experiences by underlining the importance of “understanding other realities”.
Also referring to differences, or the actual lack thereof, Elena Mamani, Deputy Head of the Albania Office of Cultural Heritage without Borders, underlined the fact that “challenges are the same between candidate countries and EU Member States”.
Visnja Kisic, Secretary General of Europa Nostra Serbia, emphasised the importance for “the grassroots to exchange experiences”.

Finally, Costa Carras, Vice-President of Europa Nostra, constructively highlighted that “the meetings showed us the great challenges ahead but also the opportunities”.

For this experience to be shared more widely, a practical toolkit will be elaborated as a follow-up measure to these Capacity Building Days to act as a practical guide and provide targeted advice concerning different funding and management models (combining EU, state and private sources) to increase the sustainability of heritage NGOs.

Europa Nostra’s Capacity-Building Days are organised in the framework of the three-year network project ‘Mainstreaming Heritage’, which is supported by the Creative Europe programme of the European Union.

The Capacity Building Days is organised annually by the Europa Nostra’s Office in Brussels, targeting different participant groups and focusing on different core issues. The 2016 edition will be addressed to Communication Officers, with a special focus on digital technologies, whereas the 2017 edition will target Outreach Officers, focusing particularly on Youth and Education.