The winners of the 2014 European Union Prize for Cultural Heritage / Europa Nostra Awards were honoured on the 5th of May during a ceremony in Vienna. Androulla Vassiliou, European Commissioner for Education, Culture, Multilingualism and Youth, and Plácido Domingo, the opera singer and President of Europa Nostra, presented the awards to the 27 winners assembled at the Austrian capital’s Burgtheater. They revealed for the first time the names of the six ‘Grand Prix’ laureates and winner of the public choice award, chosen in an online poll from among this year’s winning projects. Around 1,200 people attended the ceremony, which was held under the patronage of the Federal President of Austria, Heinz Fischer. 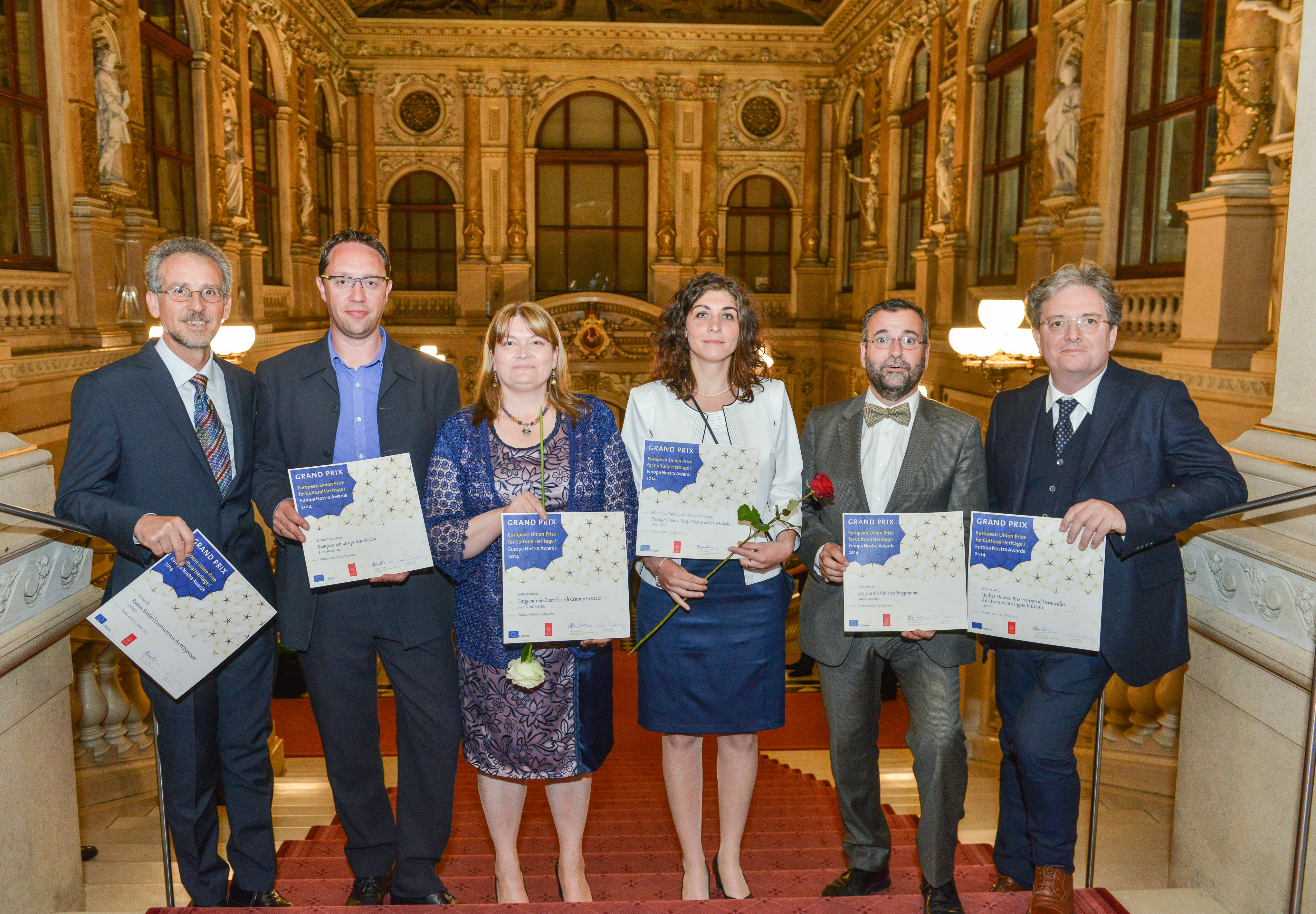 The six Grand Prix winners of the 2014 EU Prize for Cultural Heritage / Europa Nostra Awards after ceremony at the Burgtheater. From the left to the right, award-winning projects from Greece, Belgium, Romania, Hungary, Spain and Italy. Photo: Oreste Schaller.

Research
• Research on the Roman Vaulted Construction in the Peloponnese, Greece

Over 10 000 people voted for the public choice award from among this year’s 27 winners via an online poll on the Europa Nostra website. The winner is:

Public Choice Award
• Dragomirna Church: Restoration of the 17th Century Frescoes, Suceava, Romania
Commissioner Androulla Vassiliou stated: “Europe’s heritage is the envy of the world – and these projects are the best of the best. It is important that we celebrate the talent of our superb craftspeople and professionals, as well as the wonderful, tireless work of volunteers who ensure that the treasures of our past can be enjoyed by millions of people today – and safeguarded for future generations. My warmest congratulations go to all the winners and their teams, the Grand Prix laureates and public choice winner. The European Commission is proud to support the EU Prize for Heritage and other heritage projects through our new Creative Europe programme.”
Europa Nostra’s President, Plácido Domingo, added: “Vienna, one of the most notable capitals of European culture and one of my favourite cities in the world, with an exceptionally rich legacy of classical music, opera, theatre, fine arts and architecture, is the ideal setting in which to pay homage to the winners of our awards and thus to celebrate our unique tangible and intangible heritage. Tonight, at the iconic Burgtheater, we shall be inspired by musical performances by great Viennese ensembles – The Philharmonics and the Vienna Boys’ Choir – as well as by the talented children’s orchestra Superar. They will be the perfect ambassadors of the amazing creativity and diversity of Europe’s musical heritage.”

Dragomirna Church’s 17th-Century Frescoes, Suceava, Romania (also Public Choice Award winner)
The jury was struck by the high-level of professionalism in the sophisticated restoration and conservation of this enormous artwork, covering some 900 square metres of wall surface. The work was carried out in situ in a remarkably short period of time. The conservation team comprised 50 professionals and students from various countries, under the leadership of a Romanian expert. The restorers respected and followed techniques using natural, traditional and reversible materials, while the patina and original early 17th-century ‘mood’ of these unique frescoes was preserved.
Walser Houses: Preservation of Vernacular Architecture in Alagna Valsesia, Italy
Four houses, dating from the late 16th- to mid-19th centuries, were restored to their original appearance and functionality, reclaiming their place in the local community. The jury was very impressed by the quality of the detailed documentation of these rare and eye-catching farm buildings. Constructed of logs and dry stone, the houses were excellently renovated, using traditional craftsmanship. Thanks to the introduction of visitor facilities, this most unusual ensemble of buildings can now be used for educational purposes and thus help to continue the ethnic building tradition.

Cooperative Wineries Programme, Catalonia, Spain
These structures were built when small wine-growers formed cooperatives in the early 20th century. The eight wineries, originally dubbed ‘wine cathedrals’, are notable examples of the Catalan form of Modernism. The jury admired this important project as an example of the conservation of ‘working heritage’. These remarkable buildings are still being used for their original purpose. The project is also an impressive example of best practice in public-private partnership, with the cooperation between the Catalan authorities and the Caixa Foundation.

Category 2 – Research
Roman Vaulted Construction in the Peloponnese, Greece
Over a period of ten years, the Italian conservation architect Paolo Vitti studied the building and construction methods used in the Peloponnese from 100 BC to 300 AD with remarkable insight and results. Research hitherto had been dominated by the notion of the transfer of Roman building techniques into areas of the Empire such as the Peloponnese. This study, however, shows that local construction practices not only operated independently of Roman custom, but in themselves were influential in the spread of brick vaulting to other regions.

Category 3 – Dedicated Service
Kempens Landscape Association, Putte, Belgium
The Kempens Landscape Association, established in 1997, manages some 800 hectares of historically valuable land in Antwerp province. The association has devised a unique approach to conserving and managing a variety of built and natural heritage sites, located across most of the 70 municipalities of Antwerp. It is a demanding programme, managed with inspiration by a young team, extensively supported and a model of growing influence. The jury could hardly conceive of a more powerful example of the implementation of the European Landscape Convention, at the end of its first decade.

Category 4 – Education, Training and Awareness-Raising
Passage: From a Rusty City to a New Miskolc, Hungary
Miskolc is a substantial city in northern Hungary, with a proud history from medieval times. It experienced a period of notable prosperity, based on heavy industry, from the 1930s to the 1980s. Since then, however, the city has fallen into sharp decline. The Passage project focuses on the preservation and awareness-raising of Miskolc’s cultural and industrial heritage. The jury was wholly convinced of the high social value of this project. The devastating effects of recent economic and social transition, signified by depopulation, recession and loss of vitality, are being counter-acted by the vigour and enterprise of the project’s strong team.

Background
The 27 winners of the European Union Prize for Cultural Heritage / Europa Nostra Awards 2014 were selected from 160 nominated projects across 30 countries. Specialist juries made up of independent experts assess the nominated projects and select the winners in four categories: Conservation, Research, Dedicated Service, and Education, Training & Awareness-Raising. The 27 winners receive a plaque or trophy. The six Grand Prix winners also receive €10 000 each.
The award ceremony is part of Europa Nostra’s annual European Heritage Congress, which takes place from 2-6 May. The Congress is supported by the European Commission, its Representation in Austria, the Austrian Federal Ministry for the Arts and Culture, the Erste Stiftung, Stiftung Fürst Liechtenstein, Dorotheum, Bertelsmann, and Austrian national public broadcaster ORF as the media partner.
The EU Prize for Cultural Heritage / Europa Nostra Awards was launched in 2002 by the European Commission and Europa Nostra. The awards promote excellence, inspire through the ‘power of example’ and stimulate the exchange of best practices in the heritage field. They also aim to highlight the beauty and socio-economic value of Europe’s cultural heritage. The European Commission and Europa Nostra have honoured nearly 400 remarkable heritage achievements in the past 12 years.
The awards have been supported by the EU Culture Programme, which invested almost €40 million in helping to finance heritage-related projects between 2007 and 2013. Other EU programmes have also provided support to culture and heritage, in particular the European Regional Development Fund which has, in the same period, allocated €6 billion for the preservation of cultural heritage, development of cultural infrastructure and support for cultural services such as vocational training, arts and heritage education. The EU Programmes for Research and Technological Development have provided a further €150 million for heritage projects in the past 15 years.
The new Creative Europe programme, which has a budget of nearly €1.5 billion over the next seven years (9% more than previous levels), will continue to support the Prize and transnational cooperation projects in the heritage field.
In addition to its intrinsic value, cultural heritage brings a significant contribution to job creation and growth. Cultural heritage is also a key resource for sustainable development and social cohesion. It is estimated that spending on conservation of cultural heritage by public and private bodies is worth €5 billion a year. Figures published by the Organisation for Economic Co-operation and Development (OECD) show that 40% of worldwide tourism has a cultural dimension.
Europa Nostra – the Voice of Cultural Heritage in Europe – is a growing citizens’ movement for the safeguarding of Europe’s cultural and natural heritage. With its vast pan-European network of members (organisations and individuals), associates and partners, Europa Nostra is a highly influential lobby for cultural heritage. It also campaigns to save Europe’s endangered monuments, sites and landscapes. In 2013, Europa Nostra celebrated its 50th anniversary.